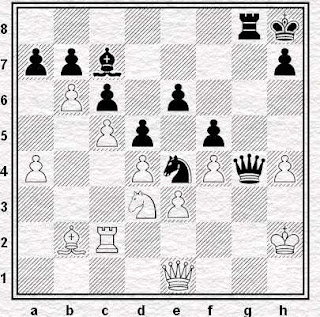 Black to not screw it up
AN Other v JMGB, Sunningdale Open 2011

It's a one time thing. It just happens a lot. It's not usually this extreme though.

My opponent had taken something like a quarter of an hour over 35 b6. He was busted. I knew it and I could tell that he knew it too ... and yet ten minutes later I was the one resigning.

Geller lectured me after I had lost to Jansa in Amsterdam in 1974. 'You stood better. Where? Well, show me the game, show me. I feel offended for the position.'

Offended for the position, Efim? Me too, comrade, me too.

I can see how Sosonko managed not to win that game, but to actually lose it was quite something. Panic? Time trouble?

Commiserations. It's so hard to see Black's winning move (1...Ng5!) not just because it's a double piece sac but also because the knight seems perfectly placed on e4. I wonder whether you'd have spotted the idea had the knight been on f7?

@EJH: in my case, the latter - not really (I had 10 minutes plus increments left when I resigned), the former - most definitely.

Have edited the post and included the full game score to allow interested readers to experience the full horror.

Without looking at a computer, are you still winning as late as move 42?

I think the main point is that whatever was going on, I was not forced to let my king, rook and queen get forked. Incidentally, the official game score ends at 43 ... Kd7. Presumably the game inputter assumed I must have seen the fork coming and resigned before it was played. I had not.

CHOKE with big choky knobs on.

As already discussed in another place, 42...Rh6 should win for Black - though White can retain some vague swindling chances by giving up his queen.....

Is there a reason you've omitted your opponent's name? Just wondering as he's a clubmate of mine.

@PJM
Not really. I usually don't mention names of my opponents explicitly, if only because they haven't asked to appear on the blog and may or may not mind. I expect that 99.9% of the time they wouldn't give a toss either way, but still, to be on the safe side, unless there's a particular reason to give the name I will most often not.

Awesome effort, JB. We've all been there.

I remember a furore in New in Chess where some Dutch guy wrote in accusing Sadler of being big-headed and this and that when he did exactly what you've done, quote a game without giving his opponent's name. Sadler wrote a rather grovelling reply; personally I thought he was right in the first place and his attitude (and yours) was the correct one.

Conversely, I nearly always give my opponent's name.

Personally I feel the opponent's name should always be given. On this occasion it was easy to discover his name, and I found it was someone I know slightly and have played, which informs my view of the game.

To my mind there's a case for leaving out a name on some occasions even if you normally give it. I omitted names here for instance, because I was discussing matters of ethics where I didn't feel my opponents had behaved quite properly. I wanted to discuss the issues raised without accusing any named individuals - particularly in a context where they probably wouldn't see it anyway and would therefore be accused of something without having the opportunity to answer back, but in any case, without making it about them, and my account of what they did or did not do.

Quite right about "Smith", PG.

Yes, possibly - Sadler was giving some speculation about his opponent's motives, which he felt made it more proper to do so anonymously. I thought that was fair enough.