Why study the endgame? I've asked this questions a few times before. The other day EJH suggested an answer that until he mentioned it had never occurred to me: learning curves.

For many (most?) of us, studying the opening will mostly be a case of adding a little knowledge to a large amount. Studying the ending, however, will be the reverse. Gustafsson and Svidler might not agree, but, looking at it in terms of learning curves, switching our attention to endings could actually be a very efficient way to spend our chessic training time.

In that light, perhaps it's about time to get back to my review of Killer Endgames - the two-part DVD set presented by GM Nick Pert under the GingerGM banner. For those who haven't already seen it, review part one can be found here. 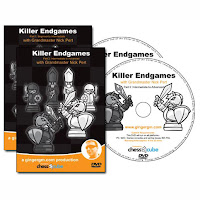 Killer Endgames volume II is very like KE volume I in many ways. It can be watched on a standard TV/DVD player, runs for around four and a half hours, divides the material by rating category rather than ending type and concludes each of its sections with a series of puzzles for the viewer to solve.

In contrast to the first DVD, however, the test positions are much less likely to relate to the endings that have just been taught. Also, while on volume I the allotment of the material to the various rating categories is a pretty good indication of what chessers of different standards can handle/need to know, here the structure is more a narrative device than something to be taken literally. Well, you can wait until you are challenging for the World Championship before you watch the video on rook plus f & h pawns against rook if you want to, but I'm not sure that it's absolutely necessary! KEII is definitely much more demanding than KEI, but I doubt that chessers around my level (172 ECF; 2049 Elo) or a few notches below will find that there's anything on the DVD that's beyond them. 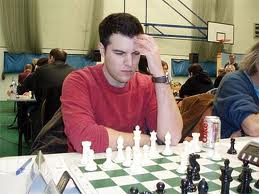 One of the Pert twins. Hopefully the right one.

KEII has a total of 21 video lessons and 16 puzzles, the lessons covering the following topics:-


While KEI spent the biggest chunk of its time on king and pawn positions, here, as you can see, attention shifts to rook and pawn endings. These are frequently said to be the most common endings in practice so the focus is in no way excessive, but it does inevitably mean that other areas are given less consideration. There are no lessons and just one puzzle devoted to bishop endings, for example.

As with the first DVD , the material is taught well. In fact, my only quibble with the presentation - the only thing that I've ever disliked about a GingerGM production, actually - is the onscreen chessboard: it's upside down. For reasons that are completely lost on your humble scribe, it's the black pieces that are shown playing from the bottom of the board upwards. I’ll have more to say about this in part III of this review, but for now I'll give you my speed conclusion: this ‘feature’ of the DVD is more than somewhat annoying, but although it certainly detracts from the presentation I did find myself getting used to it. I wish it wasn't there, but I wouldn't avoid this DVD simply because it is.

For the remainder of this part of the review I'll take a closer look at how KEII teaches the (in)famous rook and bishop against rook endgame. Doubtless Keith Arkell – 18/18 and counting with this allegedly drawish ending – has little to learn from the DVD. For those of us who have been adopting the ‘cross fingers and hope it doesn’t come up’ approach, though, a little study of KRB v KR is unlikely to go amiss.


Pert covers the rook and bishop against rook ending in three separate video segments which run for a combined total of 32 minutes.

VIDEO ONE: features the conclusion of Nick Pert v Nigel Povah, Sunningdale 2010, Pert demonstrating how an initially drawn position turned into a win and then back again before a final slip by Black handed him victory.

VIDEO TWO: is also a game fragment, Hawkins – Gormally from the 2008 British Championships, but is a much more technical lesson. Here Pert explains the second-rank defence and the Philidor Position – a set-up from which the rook and bishop can force a win.

VIDEO THREE: Pert uses another of his games (against Efimenko, Hastings 2004) to show the defender trying to keep his king in the centre for as long as possible. This is a key defensive technique because, as John Nunn observed in Secrets of Pawnless Endings, if you drag things out as long as you can, even if something goes wrong later on your opponent may run out of moves before s/he can deliver mate.

Upside down board aside, the material is well presented and clearly explained. One of things I particularly like about these DVDs is that Pert often starts the lessson before the technical phase begins. The first KRB v KR video commences from the following position, for example:- 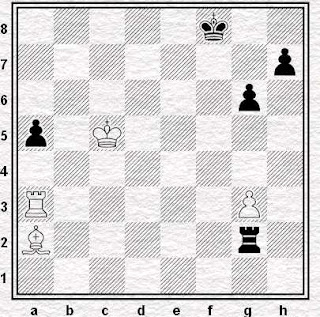 This gives the viewer some hints about general endgame play as well as teaching them the specific techniques that it is necessary to master to be able to play the various endings correctly.

It is also very much to KEII's credit that KRB v KR video one shows the two players getting it wrong. If former prodigy and later super-GM Judit Polgar can balls it up - witness how she struggled to find the right plan against Dominquez Perez at the World Cup last week (Nalimov says it's mate in 15 from the starting position) and had to resign just a few moves after achieving a standard drawing position when on the weaker side of KRB v KR in a game from 1990 - the objective assessment of this ending is clearly only half the story. For most of us in most circumstances this ending is simply too hard to play correctly, and it's helpful that KEII reflects that.

In contrast to the messy practical reality of KRB v KR shown in the first video, the second demonstrates  some specific attacking and defensive techniques that the endgame student can, and perhaps should, learn by heart. 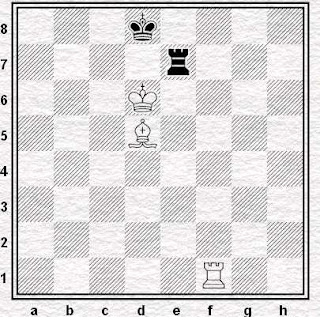 This is the famous Philidor position. Pert analyses something that is very close to it - the differences are entirely inconsequential - as part of his coverage of Hawkins-Gormally. Although he doesn’t say so, the winning method given is essentially that published by the old Frenchie two and a half centuries ago. I think it’s probably a mistake not to have drawn attention to this. Aside from the general principle of credit where it’s due, giving a position a name is a good way of assisting the viewer recall that it is this particular set up that they are aiming for (or trying to avoid if they are defending) should they reach rook and bishop against rook in their own games.

Pert demonstrates the win clearly enough – no mean feat considering that the correct strategy is virtually indistinguishable from random shuffling about – but what those new to KRB v KR will not learn from the DVD is that if you shift the position left or right things begin to change. 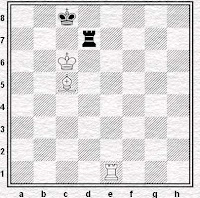 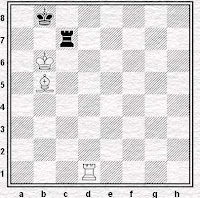 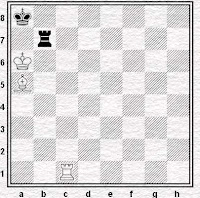 With White to play one of these positions - initially published by Lolli (1763) and von der Lasa (1843) - is drawn and while the other two are still winning, the lack of width means that the weaker side has defensive resources that are not available when the pieces are set up on one of the central files.

In terms of defensive technique, KEII teaches the second-rank method as employed by Luke McShane when he held Vlad Kramnik to a draw at the London Chess Classic last year. The other standard drawing scheme, the Cochrane defence, is not mentioned. In fact, at one stage Pert comments,

As soon as you start moving your rook behind the bishop and the king, normally you allow White to win.

and while this makes sense in context, it is nevertheless rather misleading. True, Judit Polgar lost in the game above, but she botched it on move 81 instead of following Cochrane's drawing method. Folk who know nothing of this ending other than what they learn here will be rather surprised when they find out that many many games have ended in draws after the defender uses this strategy. 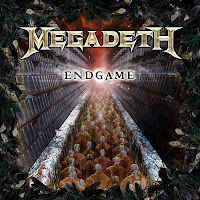 Transparently made up fact of the day:
Nick Pert and Simon Williams do backing vocals on this album.

So Killer Endgames II is not comprehensive, but then it's a DVD so it's not going to be is it? I wouldn’t expect a DVD - any DVD - to cover both of the usual methods for defending KR against KRB nor that an outline of all the Philidor-like set ups mention earlier would be given. There simply isn’t time for such material to be included.

What the DVD format loses in detail, however, it gains in accessibility and for the person who is new to KRB v KR in particular, and endings in general, Nick Pert makes the material very accessible indeed. Those who have an unshakeable preference for the printed word will probably not be converted by this disc, but anybody who would rather watch rather than read, or who finds books like Secrets of Pawnless Endgames comprehensive but intimidating and difficult to learn from, will want to consider adding Killer Endgames II to their list of future purchases.

Killer Endgames is available direct from the GingerGM
and Malc's Chess & Bridge shop
Posted by Jonathan B at 8:00 am

Excellent review! I couldn't find the contents anywhere, and I am very grateful to find them here. Quality remarks. Thanks!