It all seems so long ago: ejh's Chess in Art series. Its final extravaganza of seven Chess in Art works was in October 2008, yes 2008, and included what is perhaps one of the most enduring of chess paintings, Thomas Eakins (1844-1916) work: The Chess Players of 1876. 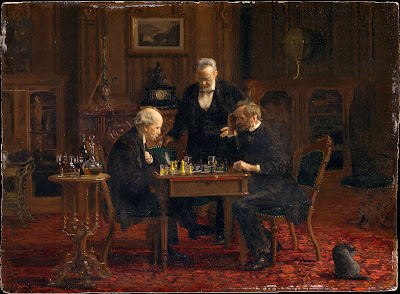 It has a lasting appeal because of its simplicity, its humanity, even its domesticity (that cat). You can immediately empathise with these chess gents of Philadelphia, especially if you are looking at it as a chesser. Serious chess is at the heart of the picture; the game is no sideshow to a seduction scene, an existential moment, or a metaphysical reverie. It is a celebration of chess.
But in spite of this straightforwardness, the painting offers unexpected depths. We have picked it apart a bit once already in Chess in Art Postscript: Naughty Boys, when we focussed on the formal aspects of the composition, and said something about the artist, but now there is more to be revealed, and ruminated upon. Seriously seeking Eakins : what else will we find?
Let's start with the game on the board (you need to look hard because, remarkably, the picture is just A3 size, so the chess board is only about 8cm wide). As we noted before, H. T. Dearden (2008) gave a plausible reconstruction of the position consistent with the body language of the characters, to a man exemplars of educated East Coast society in the "Gilded Age" of US post civil war stability and growth.
On the right is George W. Holmes (artist, and early mentor of Thomas Eakins) playing black. He is tense and alert as if to pounce on his luckless opponent, the slumped Bertrand Gerdal (who taught Thomas his fluent French). The standing figure, Thomas's father Benjamin Eakins, sides with Holmes, the imminent victor. Benjamin is significant. Watch out for him.
This is Mr Dearden's interpretation of the position, with black to move: 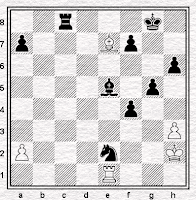 Black is clearly winning, with rather an abundance of extra material, including a bishop on e5.
But is it a B? Martin A. Berger (2000) says that, on the contrary, "Holmes's black queen stands commandingly in the center of the board...while Gardel's captured white queen rests ineffectively inside the chess table's drawer".
Well, what do you think...is that a black Q or B on e5? 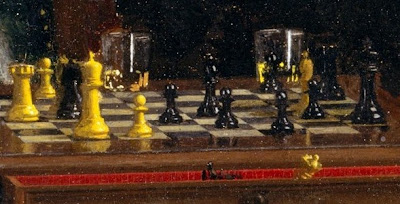 Whichever it is, black to move will win. But a queen would be overkill, surely. A bishop would be more chaessthetic - and what clinches it for me is that the black piece on e5 is the same height as the white piece on e7, which we know can't be white's queen.
Actually, I can't help also thinking that in the painting white has a piece, almost hidden, on d2 - a knight probably. Another white piece would make more of a game of it, though black would still be winning with three extra pawns and the attack.
Next, let's pick over the painting's sociological allusions with Robert Torchia (1991) who we also met before, and who, by the way, also comments on black's won position but reckons "it is not possible to transcribe the exact placement of the pieces". He argues that the picture is symptomatic of the chess explosion in the States following Paul Morphy's triumph in Europe in the late 1850s.
Philadelphia, Mr Torchia says, was a hotbed of chess with no less than six clubs in the 1870s, and seven newspaper chess columns in the 1880s (87 in the country as a whole). Indeed the city hosted a "Grand International Tournament" in August 1876 - won by James Mason of Ireland, with Henry Bird third - during the city's Grand Centennial Exhibition to mark 100 years of independence. Bird met Mason again that year in another tournament in New York, and (to get a real game into this post) Bird's brilliancy is here.
It is said, btw, that Eakins exhibited The Chess Players at the Centennial Exhibition, although their official catalogue doesn't illustrate it as it does two other chess paintings: J.C.Horsley RA's Checkmate Next Move of 1862, and J.B.Irving's The End of the Game of 1872.

Back to Mr Torchia, who argues that the chess, depicted by Eakins as a cerebral and sophisticated pursuit, is a cultural correlate of the mature and self-assured New World, confident that it could beat the Old World at its own game - speaking now economically and geo-politically. Chess is a signifier for the emergence of the US as a world power to challenge that of declining Europe. So far, so chess.
There is yet another reading of the Eakins chess painting by Qe5-man Martin A. Berger in his book Man Made: Thomas Eakins and the Construction of Gilded Age Manhood. Chess, and "Constructed Manhood"? Not Übermensch Fritz obviously; so what is he talking about?
Mr Berger gives Messrs Gerdal and Holmes a good going-over first, and then turns his attention to Eakins Senior, Benjamin; or more precisely the relationship between Eakins Snr and Eakins Jnr. You can't actually see Thomas in the picture, he is implied according to Mr Berger, and it is as if the two Eakins are facing off for a game. This imagined back and forth chess struggle between them represents their ambivalent relationship in real life. And (keep up) this derives from the different models of fatherhood/manhood that were being worked out, or constructed (so that's it) in the Gilded Age, consequent in part on the way the Civil War had catapulted boys into adulthood.
Phew. You won't be surprised to find that Freud's Oedipus Complex putting in an appearance here. Not à la Reuben Fine who used a Freudian analysis of the game to make us chaps feel guilty about playing with our Kings, but in the Eakins father/son relationship.
Thus, the picture has Oedipal ambivalence between Tom and Ben written all over it. Literally, in fact, because one piece of hard evidence advanced by Mr Berger is that Thomas signed off the picture not in his own name, but oddly (in Latin, and in red) as his father's son. This is clear in the original, in full view on the drawer, if you can get close enough.

Click on to enlarge, and see "BENJAMINI. EAKINS. FILIUS. PINXIT. '76"

And what could be more Oedipal than that?
You want more evidence of his mixed-up-ness? Tom goes off to Paris against his father's wishes for serious artistic study, gets married at forty because pa told him to, lives in the same house as him all his life, and (I'll chuck this in as well) in his professional work
has to battle with Victorian prudery concerning his
use of naked models without underwear or dress.
Golly. Jesus. No wonder Tom's a mess.
The book is a fascinating piece of what, in these post-modern days, Mr B says is "discourse analysis" of culture, derived from the methodology of French philosopher Michel Foucault. It weaves an absorbing labyrinth of interpretation, into which once entered one might never escape alive, author included.
And here's an example: after positing this imagined "allegorical battle across the chess board" between the two Eakins, he concedes this would put them into a notional STBUR* situation (Gardel and Holmes having occupied the correct sides of the board), but no matter because "the only evident outcome of such an arrangement...is to reverse the starting positions of the king and queen..." Mr Berger then continues: "While the game would be "abnormal" it could progress as any standard chess game." A point that he is wise to have relegated to a footnote buried at the back of the book, lest he cop a handbagging by the militant tendency of the Campaign for Real Chess.
For sure the chessman on the Clapham omnibus might never have expected that a painting of three old-timers and a chess set (and a cat) could be the cause of such flights of fancy. Just imagine what "discourse analysis" would do with J.B.Irving. 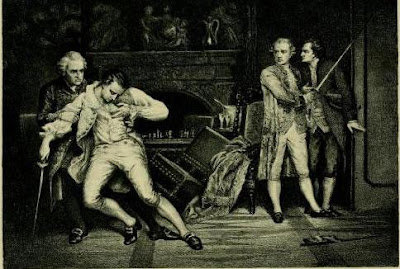 The End of Game (1872) by J.B.Irving - photogravure of the painting

Now, to finish off this post, look at a clue in The Chess Players to yet another story - which we'll come back to next Saturday. It's an insignificant feature at the back - that painting on the wall. 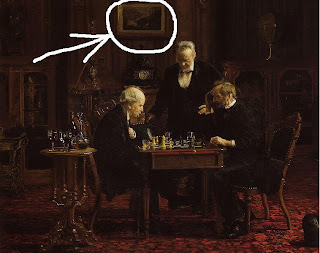 What does the picture within the picture reveal? Please come back to find out.
[*Set The Board Up Rong - an acronym created by Mike Fox and Richard James.]
Acknowledgements etc
Martin A. Berger. Man Made: Thomas Eakins and the Construction of Gilded Age Manhood. University of California Press (2000). To be fair to Mr Berger, he does refer to Irving's painting; if only to say that it helped reinforce "the game's associations with real world strife". And to be even more fair, his book is a tour de force of research and analysis of all of Eakins work.
HT Dearden. "The Chess Players", Chess, September 2008.
Reuben Fine. The Psychology of the Chess Player. Dover, New York (1967).
Robert Wilson Torchia. The Chess Players by Thomas Eakins. Winterthur Portfolio 1991.
The Catalogue of the 1876 Centennial Exhibition is here Irving is plate 258 and Horsley plate 90.
Thanks to Paul Timson for his help.
Chess in Art Index
Posted by Martin Smith at 11:00 am

Not directly related but in Vienna this week we saw "Josef Danhauser's - Game of Chess" in the Belvedere which is a fascinating painting from 1839. The final position is clearly mate with P+N vs R,N,2P. I was left wondering how did the lady catch the banker out to win the fortune he had staked on the game? [http://www.jmrw.com/Chess/Tableau_echecs/pages/187.htm]

Thanks for the Danhauser tip, Neill.

The jmrw link direct to the painting is here. The also have a short video commentary on it, explaining the wager. The transcript is given as
"it was a real story, a real happening, which happened a year before as he painted. In 1838 there was a special chess game between the banker Escales and a Hungarian noble woman. And they played because the lover of the noble woman had a big debt to this banker and that was the way she could gain back the debts. At the end, she won the game against the banker."

It also says that in it "we can see....other famous composers, like for example, Franz Liszt or piano players from that time in Vienna."

Definitely a bishop on e5 and a N on d2. I think maybe a pawn on b3, and possibly (there is no indication either way) even on g2 as well. No shadow, but then not all of pawns are casting shadows. Black is still winning, assuming it isn't white's move!

Thanks Richard, that would even up the material a bit.

I don't have Dearden's article to hand anymore, but as I recall he reckoned it was Black's move based on body language. Berger says "[Holmes] left hand waits on the table, index finger slightly uncurled in preparation to make his move. In contrast Gardel sits... [with] his hands held protectively against his body."

There is, however, one anonymous article that I looked from 1918 (it's a Berger reference) that goes: "we can almost hear the man on the left (sic) say: 'Check.' And note the restrained smile of triumph on his face...the man on the right (sic) appears visibly worried by the danger...Perhaps is was 'discover-check?' (sic).

I agree with Richard about the Be5 and Nd2. Not sure about the pb3.

It must be white to move. Otherwise the players wouldn't be so tense and thoughtful. I guess the position is unclear.