Chess in Art Postscript: There's Nothing Like Gérôme Cooking

Over the last two Saturdays we have been tucking into Thomas Eakins' masterpiece The Chess Players of 1876, now in New York's Museum of Modern Art.

A number of observers have commented that its compositional arrangement owes a lot to Jean-Léon Gérôme's 1859 work showing Arnauts at recreation, also with a board game, which is in the Wallace Collection in London.

Maybe the similarity is not too surprising as Eakins was Gérôme's pupil in Paris for two years in the late 1860s. Gérôme's influence on Eakins composition is clear to see.

Last week we left this question bubbling away: what exactly are those Arnauts up to? What's their game? 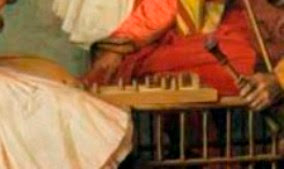 The Wallace Collection - where the Arnauts can be seen in the flesh - label it "Arnauts Playing Draughts". Now, far be it from me, your humble S&BCBlogger, to question the conclusions of such an illustrious institution, but that didn't seem quite right.

So, two years ago (sorry, it has taken so long to get round to reporting this; I got blogged down in other things, but that's another story) I asked the Wallace Collection what made them think it was draughts, and they referred me to the authoritative catalogue of their collection by John Ingamells which says:

"The game [in the painting] is played with cylindrical pieces of various heights and shapes; the related drawing...appears to show counters. Gérôme also painted oriental figures playing chess with European pieces."

Which naturally leads us to ask to see the "related drawing", please. Well here it is; from the Sterling and Francine Clark Institute of Williamstown, Massachusetts. 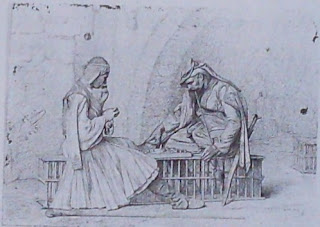 Obviously that is two of the three Arnauts in the Wallace Collection painting, the two necessary for a successful game of...well, something or other...and as Ingamells says, they appear to be using counters.

Yes, apparently so, but does that mean the "counters" were "draught counters"? They could be "chess counters" couldn't they? For example, just look at this chess set from the 11th Century Middle East, in the British Museum, with its "cylindrical pieces of various heights and shapes":

So I asked again, and the Wallace acknowledged that "there certainly seems to have been some debate over the years over whether they are playing chess or draughts", and kindly sent me a JPEG of the Gérôme...(for which, thanks)...as if that settled the matter.

What's odd about this is that all the other authorities refer to the Wallace Collection painting as "Arnauts jouant aux échecs" in spite of what the Wallace says, for example Gerard Ackerman in his authoritative Gerome's Life and Work (2000). And what is even odder is that Ackerman also refers to the Clark drawing, where he says "ils jouent aux dames (i.e. draughts) et non aux échecs". So the Gérôme expert agrees with the Wallace on one hand (about the drawing)...but disagrees on the other (about the picture). There's not much hope for the rest of us.

Anyway, Ackerman is extremely helpful in listing the other three chess paintings that Gérôme executed, some of which he describes as pastiches - not pejoratively, but only to indicate that while they are not exact copies, they are derivative.

So here it is: the full-on Gérôme Échecs Éxperience. Jean-Léon is cooking with gas. Enjoy!

We start with the most sumptuous, and perhaps the most startling: both players are women. It was painted when Gérôme was in London around 1870, and is pretty much modelled compositionally on the Wallace Arnauts. The chess set is suspiciously counter-like. 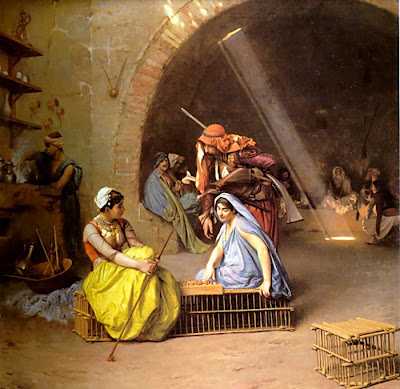 Almées jouant aux échecs (1870)
Private Collection
Almehs it seems, were a superior class of female singer, dancer and entertainer (I suppose that means in the widest sense) in Egypt, but disinclined, I'll wager, to let some tooled-up Albanian chancer make an easy score.

The next one is almost a bit too small in this image to see clearly, but the chess is over there in the right-hand corner, with usual trio of players, though this time Gérôme seems more interested in the townscape. 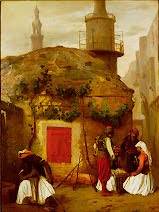 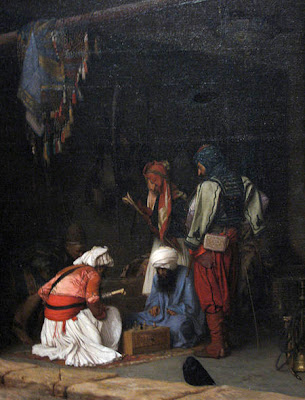 Une Partie d'échecs (1870)
Isaac Delgado Museum. New Orleans
Of all the four Gérôme chess paintings this is perhaps the most claustrophobic in atmosphere; the most hermetic and secretive; the most sinister. Another Arnaud has joined the gang - maybe they aren't playing a game at all, but are using the board to plan a bit of random mayhem.

And that, (in case you missed it, there was a clear sighting in the last one of a familiar chess set, the "European pieces" mentioned by the Wallace) would seem to be that.

But not quite. I recently stumbled on this: 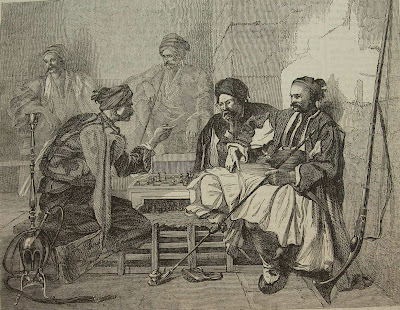 ...with not one, but two standard-issue chess sets in play (is he giving a simul?). It is by another French "Orientalist", Alexandre Bida (1813-1895), a member of the prestigious Salon and fêted in his time. It was reproduced in the Illustrated London News in 1859, which commented that Bida produced "the effect of colour with colourless materials" - it's in black crayon. Exquisite.

Like Gérôme, Bida travelled widely in the Middle East and North Africa recording the locals with scrupulous ethnographic zeal. If he shows them playing with European pieces, you can be sure that is what they were using.

And finally, a bonbon to round off this three part Eakins/Gérôme sequence: it shows that crusty old Gérôme, pillar of the French art establishment, opponent of Impressionism, had a soft centre. Here is his entry in a competition for advertising signs. 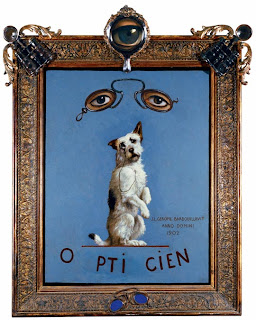 That's a rather marvellous pun in the advert...

The bench looks rather narrow so I doubt this is is a chess/draughts board but rather thinks it's a rectangular board. It could be an imitation of the game of senet, the game from ancient Egypt for which examples were know in the Cairo museum and in European collections too.