Where all the chess films? Sure, there are plenty with chess in them - we had Sherlock Holmes II a little while ago and Harry Brown not long before that - but movies where our favourite game is the central theme? Off the top of my head I can think of Luhzin Defence and Knight Moves and that's about it in recent times.

No, chessers don't do very well on the big screen. Sometimes even the briefest of allusions to the 64 squares will find itself cut from the final edit. So, if nobody else is going to do it, perhaps it's time we got proactive and wrote something ourselves. 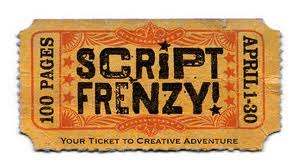 For those that know about it, Script Frenzy has become an annual institution. Every April thousands of people around the world sit down with one and the same goal: write a full-length 100-page film script before the month is out.

I know what you're thinking. Writing a film from scratch in thirty days? It's a big ask. Impossible in fact. The only conceivable result from writing in such a rush is a big steaming pile of poo, isn't it?

You know what? You're right. Sort of.

The idea is to end up with a first draft. Something you can revise. You - or we, since I will be doing it too - will be working on the principle that the art of writing is rewriting and if nothing else you/we will at least have made a start. That's further than most people with an idea ever get, immobilised as they are by the feeling that they have to get everything perfect right from the off.

Don't worry if you've never written a film script, or anything at all, before. There's a shedful of resources available to download on the website. If you give it a go I'm sure you'll find it a lot of fun. I know that from taking part in Frenzy's sister activity, NaNoWriMo, where you Write a Novel in a Month (Beograd Endgame: 50,339 words in 28 days, thanks for asking).

Writing starts at one second past midnight on Saturday night/Sunday morning, but if you're reading this on Saturday you can always do a bit of pre-planning to help yourself get started. If you've got an idea, perhaps just a vague one, you might want to spend some of today creating a 'logline', what Script Frenzy describe as "a one sentence, '25 words or less' description of a screenplay".

As it happens they have some advice on loglines:-

It should have a clear beginning, middle and end, and will usually start by introducing the main character like so:


The President of the chess club ...

Then describing the character's journey:


joins the football team hoping to impress a girl ...

And finishing by summarizing the story's outcome without giving away the ending.


... only to find that what works on the chessboard doesn't necessarily work on the football field ... or in the game of love.

A lame joke, of course, but there's the guts of something in there. A chess boxing club rather than a football team is much more the ticket. Make that change and work in a FIDE female dress-code subplot and we've got ourselves a chess film.

Time to get writing ... and feel free to starting making room on your mantelpiece for an Oscar if you wish.

I thought of a chess film idea the other day. Chess Club v Flash Mob. The idea is that a flash mob constantly tries to disrupt a chess club, but ends up as simul fodder.

In Soviet Union (Russia) was old movie - "Grandmaster", young Kortchnoi play in this movie. It's funny, but he play yourself. In this movie play Tal, Taimanov and other soviet great chessplayers from 1970-s. Here is the sample: http://www.youtube.com/watch?v=dWcuLXYSXgQ

Superb link, thanks. I knew the film existed, but I've never seen any of it.