Not a serious game, at any rate: not a club or tournament game, not even a game for my school team. Comes of having a birthday in what you'd probably call the close season (in British terms at any rate) with club matches having come to an end, while most of the summer congresses seemingly wait for the school holidays to start.

If I'd particularly wanted to find a game to play, of course I could have done so: but as it happens, looking back through my scorebooks, it appears I never have. As yet, I have never played a serious chess game on my birthday.

Steinitz did. Matter of fact he played a world championship game on his birthday, the sixteenth game of his first match against Lasker taking place on 17 May 1894, Steinitz's 58th birthday. It didn't go well.

The match itself wasn't going well, Steinitz having lost the previous game to go four points down. (This was still an improvement on the five-point margin he'd faced after suffering five consecutive defeats in games 7-11.) He had the White bits for his birthday, but he was close to lost at an early stage and would probably not have survived long past move 21 It was Lasker though who probably tried a little too hard to win - 31...Nxg3 looks better than his 31...Kf7, which gave White time to get at the queenside pawns, and before long the b7 pawn looked more dangerous than the one on e3. 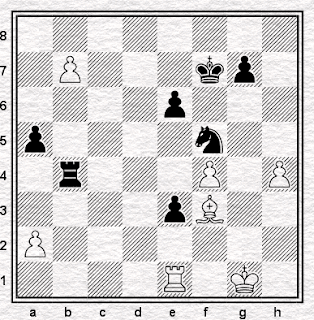 But there were to be no prizes for White at his own party, as he set himself up for the blunder to follow with 36.Rc1?! (better 36.Kf1, though the move he missed does not actually win and the move he played does not actually lose). There came 36...Nd4 setting a trap and after 37.Kg2?? (37.Rc7+ was quite necessary) Black with 37...Rb2+ 38.Kg3 Rxb7! won the b7 pawn and the game. After which I can't imagine Steinitz had much stomach for jelly and ice cream.


In the 1896/7 match between the same two players, Steinitz won the 12th game, played the day before Lasker's birthday, and the 13th*, played the day after. Losing the day after one's birthday can't be an uncommon syndrome, though it might also be that Lasker lost a little bit of focus (to use a term they probably did not use then) after being seven points up by game eleven. Whatever the reasons, those two were the only games Lasker lost.

Lasker, though, didn't actually play any games on his birthday. Nor, if I am correct, has any world championship contestant since. Which, if I'm right (and I do say "if") is, on the face of it, extraordinary.

When I say "on his birthday" I refer only to the dates on which games began. I've not taken into account adjournment sessions played on birthdays. I imagine there must be some, but that would need to be researched by somebody considerably more assiduous than I. As indeed, would calculating the odds against nobody having played on their birthday since 1894.

With some much-appreciated help from Angus French I've looked at all the world championship matches since 1886, including both sides of the post-1993 schism, the tournaments of 1948 (The Hague-Moscow) and 2005 (San Luis) and the final matches of the FIDE knockout tournaments. We've used Mega Database (2010 version) and the less-than-perfect ChessBaseLight2009** and, as stated above, it seems that, adjournments apart, no champion since Steinitz - and no challenger at all - has played a world championship game on their birthday.

Not even Smyslov, whose birthday coincided with his participation in three world championship matches and a world championship tournament. Not even Petrosian, who lost his title in a match that concluded the day before his birthday. (Did the closing ceremony take place on his birthday? What a super birthday that must have been.) 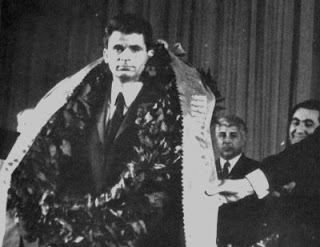 So, no challengers and just the one champion? Maybe, no champions at all. Because although I say "matter of fact" above, it's not a matter of fact - or not so far as can be established, since Steinitz's birthday is not known for sure. English-language Wikipedia has 17 May, all right, but the Spanish version offers us 14 May, neither page choosing to discuss the discrepancy. I can also find 18 May and (if I really drop the quality threshold) 7 May.

In his authoritative Chess Personalia, Jeremy Gaige gives (as reported by Edward Winter)

and a commentor on chessgames.com suggests that even the year of Steinitz's birth has not always been entirely clear. But it's his birthday, rather than his age, that we're particularly interested in here. And it appears we do not really have it.

[* ChessBase Light has this game finishing on move 38, Chessgames.com on move 40. Which, if either, is right?]

[** if, for instance, I click on any game for the 1969 world championship, it favours me with the score of Estrin-Baranov from the 1952 Moscow Championship. Several other matches, when searched, give similarly bizarre results.]

I played a London League match this year on my birthday, and lost. It was the only rated game I played all season. Yet my grade went up two points and I got into the 200s for the first time.

I also played on my birthday. Last year.

This is what happened

Assuming I'm correct and no world championship game since Steinitz has been played on a contestant's birthday, are there any mathematical geniuses reading who'd care to calculate the odds? It is Friday after all.

The odds of not playing in a world championship match on your birthday would be quite low if it's a random event. I don't think it is though, because many of the matches had conditions which enabled players to take a time out. So it's possible they chose not to play.

I tried to reproduce the CBlight 1969 bug. Searching for Spassky Petrosian and 1969 identified 25 games which looked like the games I remember. So that was 23 games from the match, 1 from Palma and as a bonus 1 from Palma 1968. But bugs which give different results on different computers are the most difficult to track.

Aren't nearly all GMs born in October? This presumably has an impact on the likelihood, since World Championship matches aren't scheduled for a particular month.

I've no idea, but, funnily enough, the very same question is going to crop up in the Double Six series that has just started.

Anyhoo, I hope you enjoyed your birthday not playing chess.

The last time I played on my birthday was at the (now sadly discontinued) Croydon rapidplay when not only did I get a poor result but I turned the wrong way on to the M23 (heading for Gatwick rather than Croydon) thereby missing the first round. Moral: don't play on your birthday!

Late note: it transpires that Steinitz did not in fact play on his birthday.