A Literary Reference : A Portrait Of The Artist As A Young Man 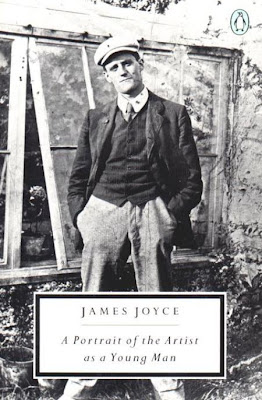 A sudden swift hiss fell from the windows above him and he knew that the electric lamps had been switched on in the readers' room. He turned into the pillared hall, now calmly lit, went up the staircase and passed in through the clicking turnstile.

Cranly was sitting over near the dictionaries. A thick book, opened at the frontispiece, lay before him on the wooden rest. He leaned back in his chair, inclining his ear like that of a confessor to the face of the medical student who was reading to him a problem from the chess page of a journal. Stephen sat down at his right and the priest at the other side of the table closed his copy of The Tablet with an angry snap and stood up.

Cranly gazed after him blandly and vaguely. The medical student went on in a softer voice:

—We had better go, Dixon, said Stephen in warning. He has gone to complain.

Dixon folded the journal and rose with dignity, saying:

—Our men retired in good order.

—With guns and cattle, added Stephen, pointing to the titlepage of Cranly's book on which was printed Diseases of the Ox.

As they passed through a lane of the tables Stephen said:

—Cranly, I want to speak to you.

Cranly did not answer or turn. He laid his book on the counter and passed out, his well-shod feet sounding flatly on the floor. On the staircase he paused and gazing absently at Dixon repeated:

—Put it that way if you like, Dixon said.


[A Literary reference index]
[Thanks to Tom]
Posted by ejh at 9:55 am

If Joyce was a chess opening, he'd be the Sicilian.

Funnily enough with his post-Ulysses reputation, the prose was a breeze. The only problem was having to stop every few sentences for a footnote. (I remember something similar with Gulliver's Travels, though it didn't stop me thinking it wsas one of the best things I'd ever read.) But I don't how comprehensible any of it is to somebody not

(a) brought up in Catholicism ; and
(b) having a decent knowledge of nineteenth-century Irish history.

By the way, the next thing I read also had an unexpected chess sequence, and will be the next item in this series.

You might like to also read "At Swim Two Birds" by Flann O'Brien (real name: Briain O'Nolan). It must be one of the first novels to contain a novel within itself. It also has a hilarious description about how to become a member of the Fianna (a legendary group of heroes from Ireland's distant past). Part of the vetting process includes the ability to play chess.

As a member of the Dublin Chess Club, I knew Gerry O'Nolan, who was Flann's brother. Gerry told me that his father had paid a visiting master for chess lessons. The master's name now escapes me, I think it began with a K, Koslowski, or something like that. All this occurred in 1920's, or possibly the previous decade.

Anyone read the compelling 'Tony and Susan' by Austin Wright? Also has a novel in a novel.

From Capital by John Lanchester

'If he could have got away with it, he would have quite liked to do that thing of calling all his assistants by the same name. Nigel, say. His assistant would always be called Nigel. Every year or so there would be a new Nigel. Short Nigels, tall Nigels, hairy Nigels, skinhead Nigels, Rasta Nigels - but always, in the final analysis, Nigels. That would be funny.'

Can you see the name of a chess player know to us all cunningly hidden in the text?