And Smith Must Score

Let's dredge up this one again. Why not? Chess isn't recognised as a sport; not by the IOC, not by the British Government, not by most people. But I'm going to suggest, with my tongue gently brushing my cheek, that it's because of a lack of famous commentaries. 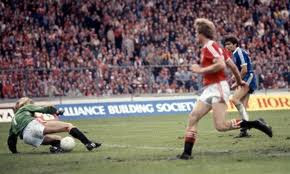 And here's the problem, which, as far as I can make out, isn't going to be solved any time soon. Poker works on TV because the narrative of a tournament or cash game doesn't require an explanation of the whole. It's possible to broadcast only the key moments as every individual hand is a distinct entity. What the viewer sees as a 45 minute rollercoaster was actually filmed over many, many hours. I'm not convinced such an approach is possible in chess because, at the elite level, the concepts themselves will take a long time to explain properly. And commentating on blitz games, while exciting, doesn't leave time for decent explanation, nor is it an indicator of what chess is really about. Though I'll admit that I could listen to Maurice Ashley all day.

I suppose, if that's the only way of making it accessible, then chess is probably better off not being in the mix.

Although as I recall The Master Game did in fact do this with longer games.

The subtlety of the little moments wins games, though. Just showing blunders and breakthroughs misses the point, and isn't indicative of the continuous narrative of chess that makes it unique.

The Master Game did move by move commentary. If the game was too long, they would use "we join the game at move 10". From memory it was a half hour program, so essentially a video of a long post mortem.

You could sometimes predict a short draw, because of lengthy filler comments on opening moves.

At a limited level, some of the commentary entered the thought process of players. The concepts of a "normal move" and "making it work" for example. So the players would say "The normal move would be x but let's see if y can be made to work"

I never liked the bits in the Master Game when they joined the game late. Still less did I like the bits when they jumped from one move to a much later one in the middle of the game.

... the concepts themselves will take a long time to explain properly....

I'm quite sure that it's true that the difficulty in communicating what chess is - or at least the perception that it will be difficult - is a major reason why chess is not on tv more often than it is.

What's odd is that despite the fact that chess seems to be 'too complicated for factual telly' it appears time and time again in drama - tv and film - as a shorthand way to get plot elements across. More on that on Wednesday.