The gentlemen of Brasen Nose Chess Club met every Thursday at at the rooms of its members, in rotation. They played chess – and only chess – for five hours until , rule 10 stating that ‘no cards be allowed’. The founder’s son William Tuckwell tells us that a ballot-box stood upon the table, with the motto ‘regum inviolobile numen’, the sense of which is less than clear.  A literal translation is ‘the divine power of kings is inviolable’, meaning perhaps that kings cannot be taken by other, lesser pieces.

At the chessers allowed themselves a break for supper, probably prompted by the 101 chimes of the bell of Great Tom. 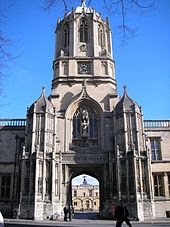 Nowadays at most chess clubs you’re lucky to get a biscuit, but these gentlemen took their food seriously and even set out some specific requirements in the rules: ‘In the supper to be provided for the evening, a barrel of oysters be the chief luxury of the table… [and] no hot dish be allowed’. A cold spread then, but a jolly good one by the sound of it, even if the barrel of oysters was probably not quite as lavish as it sounds. It may have contained four dozen oysters, or eight for each member of the club.

It’s tempting to conclude, as Philip Sergeant does in A Century of British Chess, that the club ‘devoted more attention to sociability and to supper than to chess’, but that is not borne out by the minute book, which gives the impression of a group of gents with serious intent. ‘No hot dish be allowed’ implies that they did not want to be diverted from the main purpose of the evening – to play chess.

Members were expected to adhere to some tough rules. One in particular was to prove problematic: Rule 4 requires that ‘every member actually residing in , who is not present at , shall be subject to the fine of one shilling’. Rule 25, added later, goes even further: ‘any person, having in his possession the book in which the fines are registered and neglecting to send it to the room in which the club is held before , should himself be fined two shillings’. Ouch, this could be an expensive club if there were other things you wanted to do on a Thursday night.

The fines were collected for a specific purpose: to finance an annual anniversary dinner to which guests were to be invited. The first, and only, dinner duly took place in February 1811, but not before the members had fallen out amongst themselves over the fines. The first sign of trouble is in a minute relating to the meeting of : ‘although this be the night of a choral concert, yet it is determined that no such excuse shall avail for its prevention of a chess club’, and six of the eight members were duly fined for non-attendance.

The tone worsens towards the end of the year. Five absentees were recorded at the club night of : ‘a severe reprimand is hereby recorded against the general spirit of defection which has been exhibited this evening’. The following month, dissent took the form of a ‘resolution’, the nature of which is unclear, apparently adopted by a faction in the club around John Lingard. A minute for 20 December, signed by Allen, Dawson and Prescot, records:

‘In consequence of the presumptuous and unprecedented resolution of a few individuals (blush to add, members of the chess club) it was determined that the club should be deferred till some future period more suited to their own private convenience. Such a resolution we do most decidedly condemn, as violating the principles upon which the club was originally established, and tending most materially to its consequences to its disorganization and its ruin.’

The writing was clearly on the wall. There is more trouble in January 1811: one of the minutes for that month has this melodramatic, if somewhat ambiguous, comment :

‘It is with extreme regret that we this evening have to notice the desertion of one of our honorary members of the committee. Mr Lingard, being challenged by his vanquished antagonisms to resume the conflict, chose to decline the contest, and preferred exacting his vocal powers in opposition to the spirit, if not the letter, of those laws, which he himself transcribed for the regulation of the Chess Society.’

Oh dear, it seems the earliest known provincial chess club in was to be undone by internal feuding. Brasen Nose Chess Club seems to peter out over the next few months and the last entry is for , a date which probably marks the club’s last meeting.

But at least there was a slap-up dinner to enjoy: more on that in the next Saturday’s blog.

Links to the three previous episodes can be found  here.
Posted by richardT at 11:00 am

I make it 6 oysters each.