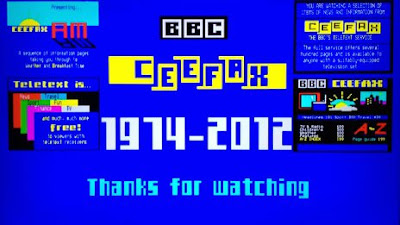 So farewell, then, Ceefax. I'll miss it when I'm back in England. We still have teletext here, but it's not remotely as good as Ceefax was. You can't even follow the cricket on it.

After a while I could do it almost with my eyes closed: the newsflash on 150, then all the news from 102 upwards, the regional news on 160, then the football on 302 and pages upwards from that, the cricket on 340 and so on. Then back to 102 and see what had changed in the meantime. This is not a particularly sociable and outdoorsy way to conduct oneself, but neither is playing chess. Or reading about it on the internet.

I'd also check out 568. John Saunders curated that page for the last dozen years of its existence, and Adam Raoof before him. There was also 153 on Teletext for a time, courtesy of James Coleman. But it's Ceefax I remember best, because it was with us for so long, and because the memory I associate most with teletext itself is watching chess on there, nearly twenty years ago. (I almost wrote "before the internet", but it wasn't. Though it was probably before chess on the internet.)

When it was announced that Ceefax was to close, the BBC asked people for their memories of the service. They didn't use mine, but their farewell notice did have a comment by Chris Howell.

It is, indeed, Speelman and Hodgson in the photo - which doesn't seem to be there for any reason I can immediately detect in the piece (what am I missing?) but let's not complain about some unexpected chess on the BBC. 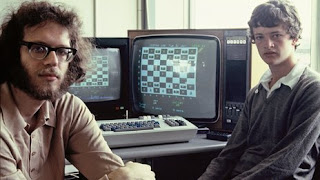 The tennis game was even more sophisticated

What I remember best about chess on Ceefax, and about Ceefax itself, is the Short v Timman match from 1993. It was the biggest thing in the history of English chess, Short had just beaten Karpov and was favourite to win, and the moves were live on Ceefax. Or sort of live on Ceefax.

They came through in chunks. Perhaps five or six moves at a time, I think. It varied. And there was one particular game that I remember watching.

I was almost sure - and now I am sure - that I remembered, in the game that I recall, that Short stood to go two games up if he won, but would be level if he lost. That would match the twelfth, which took place after Timman had lost the ninth and tenth games to go two down, but pulled back half the distance with a win in the long eleventh.

It was unbelievably tense. This wasn't a match like Anand-Gelfand, where you expected a draw before the start of every game: the last three games had been decisive and a one-point lead with three games to play was less than commanding, even though Short had two Whites remaining and only one more Black. He ought to win from there, I thought: but being a goal up with five minutes to play doesn't seem so secure if you were two up with ten remaining.

So the moves started coming through. It was a Thursday afternoon in January: I must have been off work (and thinking about it, the previous day would have been my then-girlfriend's birthday). The chunks began to come through. For quite a while, it looked like everything was under control. Bill Hartston, in the next day's Independent:

Not all that active, if you ask me: the ragged pawn formation was more evident than the active piece play, none of Black's pieces looking particularly busy.


For some time, Short maintained a grip on the game, but he seemed to hesitate in the middle-game when he first rushed in with his queen to attack a pawn, then had second thoughts and retreated without taking it. 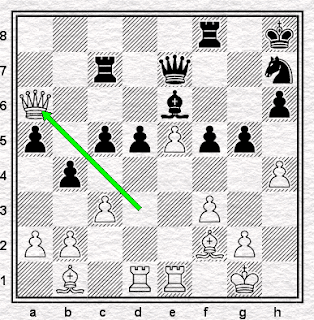 I don't know about "rushed in": it's a perfectly good move, taking advantage of that old ragged pawn formation. But when, two moves later, Short sent the queen back where it had come from with 28.Qd3, it looked like things might be going wrong.

Not that Timman had done a vast amount with the two tempi Short had given him, but it didn't look like a cunning manoeuvre, it looked like White had changed his mind. Which he had, or got cold feet, which wasn't typical of the man at all. Indecisiveness at the crucial point of the match is not, at all, what you want to see. Or what we'd come to expect.

It also looked, after 28...gxh4, like Black had taken a pawn, and gained an open file. 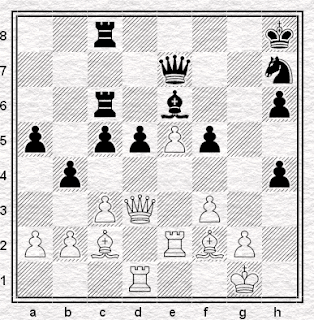 These days, we'd have our computers on and they'd tell us that though Short had lost some of his advantage, he still stood rather better. Back then, we didn't (well I didn't) so all I had was my own chess knowledge, a set in front of me, and the moves comeing through on Ceefax.

When I say that the moves were coming through in chunks, it also means, you understand, that most of the time nothing was coming through at all. You waited for, I don't know, maybe half an hour between chunks. Seemed like more. For all you knew, the service had stopped working. You just had to wait.

In next day's paper, Hartston reckoned:


Timman tried to use the time gained to move on to the attack. With a black rook a little offside, Short seized his chance and sacrificed rook for bishop to control the centre. Suddenly it became clear that Timman's king was in trouble and he was desperately short of time. 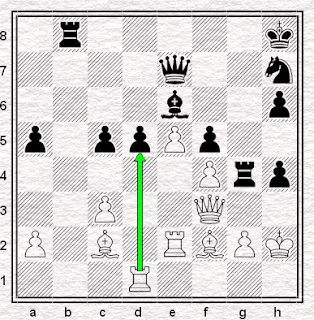 It didn't become clear to me: I didn't know if Short was on top, or whether he was giving up the exchange because Black was getting on top and White had no choice. Neither of Black's rooks looked offside to me.

In fact it probably wasn't before 37.Bd4 appeared that I felt confident that White was winning. 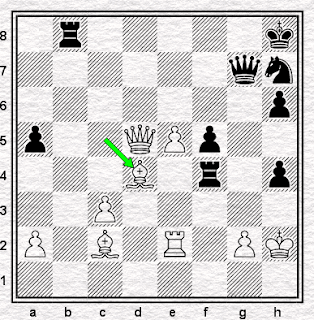 What I could see was Black's queen and rook and h-pawn converging on Short's king.

Now this would be a better story if I knew exactly in what chunks moves had come through. I don't and never will. So I don't actually know whether the position below, the time control position, had been reached or whether we were still a little before that, with the time control still to come. 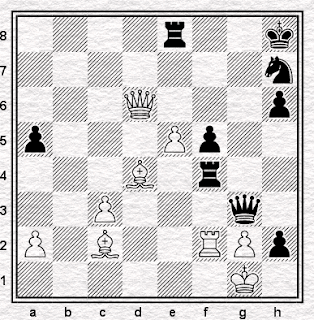 What I do know is that whether or not the time limit had been reached, the limit of my nerves certainly had. I couldn't take it any more. I put on my shoes, got my coat, went out of the door, went for a walk and didn't come back until I hoped it was all over.

Thanks for this! Yes, at the end you have reached the position which I thought at the time to be hopeless for Short until I realised just how damaging e5-e6 + would be. Apparently one misses backwards moves when following chess on Ceefax too.