Last Saturday we looked at the internal bickering which was to be the undoing of ’s earliest known provincial chess club at , .

Although the members had fallen out amongst themselves, they remained on good enough terms to proceed with the anniversary dinner, which was held on . The dinner was paid for out of the fines collected from club members for failing to turn up for club nights or, worse still, forgetting to bring the book of fines. It was this arrangement that had caused so much dissension, and the members may have known that their club was unlikely to survive for a second anniversary dinner, but they made sure they went out in style.

The dinner was held at the King’s Arms, which is still there today and is now a Youngs pub with its own Wikipedia entry. 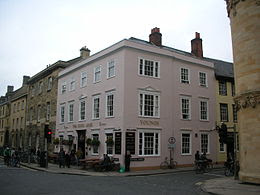 The King’s Arms, a popular watering hole for students then as now,
and venue for the Brasen Nose Chess club’s anniversary dinner in 1811.
It stands at the corner of Parks Road and Holywell Street.

Sixteen people attended the dinner including guests, or ‘strangers’ as the minutes describe them. In his Reminiscences of Oxford, the founder’s son William Tuckwell reveals the identity of three of these guests: Henry Matthews, Sir Christopher Pegge and a Mr Markland. Henry Matthews was later to achieve considerable success with his Diary of an Invalid, an account of a tour in , and . Sir Christopher Pegge was Regius Professor of Medicine at from 1801 until his death in 1822. Mr Markland was probably James Heywood Markland (1788-1864), a solicitor and in later life an antiquarian who, like most of the chess club members, had roots in .

The star of the anniversary dinner was Thomas Dunbar, the chess club’s poet laureate. is a largely forgotten figure now, remembered only, if at all, for his not-notably-distinguished tenure as Keeper of the in between 1815 and 1822. He was described as being ‘indolent and unscientific’ though according to the British Archaeology at the Ashmolean Museum website, ‘he is credited as cleaning and tidying up the displays’. At the time of the dinner was well known in circles for his quickness of wit and erudition (William Tuckwell tells us in his Reminiscences of Oxford that his conversation was ‘sparkling with apt quotations and with pointed well-placed anecdotes’).

’s poems were handed about in manuscript rather than published and his Ode to Caissa, which he wrote for the occasion of the dinner, is one of the few survivors. The text of his ode was transcribed in the Brasen Nose Chess club’s minute book and later published by Tuckwell in an appendix to his Reminiscences of Oxford.

So, picture the scene at The King’s Arms… The eight members of the chess club, their differences forgotten (at least temporarily) have gathered with their poet laureate Thomas Dunbar and their seven guests. rises to recite his ode. It tells the story of Caissa, the Goddess of Chess, (who has her very own Wikipedia entry here) from her origins in the East to conquer and vanquish lesser games. 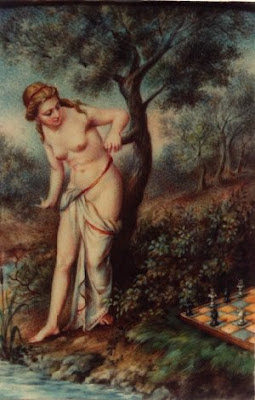 A scantily-clad Caissa, the goddess of Chess,
as painted by Domenico Maria Fratto (1669-1763).


Ode to Caissa by Thomas Dunbar
[Not to be confused with JD Chrome’s song or Svetlana Rakhimova’s poem of the same title.]

From the bright burning lands and the rich forests of ,
See the form of Caissa arise;
In the caverns of Brahma no longer confined,
To the shades of fair she flies.

A figure so fair through the region of light
All natives with wonder survey,
As her varying mantle now darkens with night,
Now beams with the silver of day.

Let Whist, like the bat, from such splendour retire,
A splendour too strong for his eyes;
The Trump and Odd Trick let dull Av’rice admire,
Entrapped by so paltry a prize.

Can Finesse and the Ten-Ace e’er hope to prevail
When Reason opposes her weight,
When inviolate Majesty hangs in the scale,
And Castles yet tremble with fate?

When the bosom of Beauty the throbbing heart meets,
And Caissa’s the gay Valentine,
What Chessman, who’d tasted such amorous sweets,
His Mate but with life would resign?

But ‘tis o’er – Terebinth the decision approves,
And Whist has contended in vain;
To the Mansion of Hades the Genius removes,
Where he gnaws his own counters in pain.

On Philosophy’s brow a new lustre unfolds,
Mild Reason exults in the birth;
His creation benign Father Tuckwell beholds,
And Steph gives the chaplet to Mirth.

Three of the club members are referred to in the last two stanzas: ‘Terebinth’ is a nickname for John Lingard, ‘benign Father Tuckwell’ is the club’s founder William Tuckwell, and ‘Steph’ is Richard Stephens. The meaning of the last line is lost to us, but the diners that night would have understood and no doubt rewarded with a knowing chuckle and an enthusiastic round of applause.

The dinner was also the occasion for the club to present , who was shortly to travel to the East, with a letter in Latin drafted by another of the club members, Ashurst Turner Gilbert. was to give the letter to Abdul Hamed Abraschid, who gloried in the title ‘Father of the Faithful and President of the Chess Club in the Eastern World’. My internet trawl has revealed nothing about this splendid gentleman’s identity but research continues and more on him, hopefully, in a future post.

Next Saturday, in the last of this series, we will review what we have learned about early chess clubs and consider some intriguing links between the Brasen Nose and clubs.

Links to the four previous episodes can be found here.
Posted by richardT at 11:00 am

Good lord, the KA. I bet it's a fiver a pint in there now.