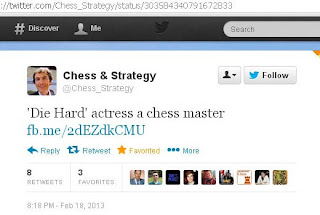 Say what you like about the new Die Hard film, nobody seems to think it's any good but it's got more chess in it than your average guns-and-explosions movie. Not just a couple of action chess shots but an actual chess player among the cast, too. Not just any old player, either, but a "master". If you believe the Tweet above.


Now personally I'm disinclined to believe anything I read about chess in the non-specialist media, at least when it's written by non-specialist writers. On learning that the subject, one Yuliya Snigir, was somebody I'd never heard of, my disinclination increased. On reading that she was a chess professional at fifteen, it reached critical levels. Still, you know how it is: when it comes to reporting chess, everyone's a prodigy or a master

Or a mug, perhaps. On this occasion the mug turns out to be one Rick Bentley of the Fresno Bee. 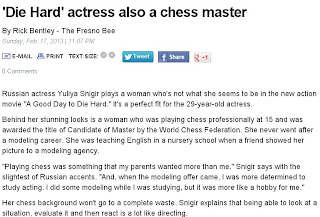 If we were giving Mr Bentley's report a really thorough going-over, we'd have to trouble ourselves with stuff like this


Snigir explains that being able to look at a situation, evaluate it and then react is a lot like directing

but we'll let it pass for now, what with the claim that Snigir was a chess professional at fifteen and that she


was awarded the title of Candidate of Master by the World Chess Federation.

Now if I were presented with these claims, I rather hope I would verify them, the first of them being difficult to believe and the second one not impossible to check. However, Mr Bentley's piece was not written without consulting the Internet Movie Database, whose entry on Ms Snigir, apparently written by someone called Elena Baranova, makes the claims that Mr Bentley repeats. 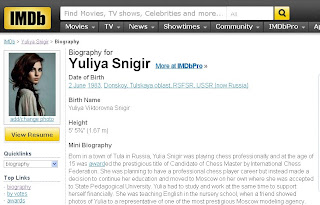 With a source that reputable, Mr Bentley may have thought, why check? Because it's extremely unusual to be a chess professional at fifteen, would be one answer. Because "Candidate of Master" doesn't quite sound right, would be a second. There's a third: because if you email FIDE to ask about it, they will write back and say


Unfortunately we did not find Ms. Snigir in the FIDE database.

As indeed they did when I enquired. As it happens, her absence had already been noted. 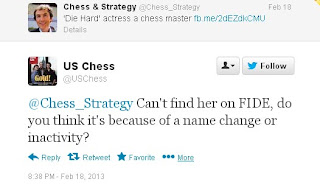 A name change? Inactivity? Both these are possible, though there is a third possibility, which is that the story owes a great deal more to the imagination than to reality. Especially as a database search didn't reveal any games played by our heroine. Not one. Which is a tad surprising for somebody who was playing professionally at fifteen.

It's true to say that we would be talking - she's twenty-nine now and was fifteen then - of a period just before the end of the last century, and, in my experience, just before the period where most events and occurrences in the world of chess can be traced online. (That said, tournament games at a decent level do often tend to be in databases, though not always, not by any means.)

It's also possible that FIDE's records aren't entirely complete. The "Candidate of Master" thing, assuming "Candidate Master" is meant, is a strange one to make up. And yes, perhaps she's changed her name, not that she has said so, or that anybody has asked her.

So some of this might be true, though I'll be amazed if "chess professional at fifteen" is among any true parts that the story may actually possess. Thing is, though, right now, the total amount of information we have in support of the story is nil. Nothing. Not a particle. 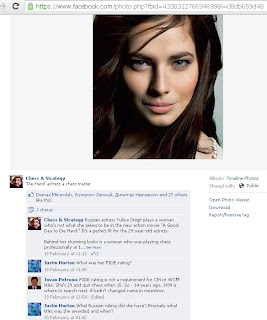 Still, you may be thinking, who cares? How much readership does this blog share with the Fresno Bee? Isn't IMDB a dicky source anyway? And surely hype is what the movies are all about?

Fair enough, up to a point, though it's a shame that our field is one in which nonsense is so easily repeated without question. This serves as a typical example, rather than a particularly egregious or important one. Still, as I have observed before, the chess world has only itself to blame, since its inclination to check facts and challenge nonsense is rather less than its eagerness to repeat without question anything that might appear to promote chess.

Naturally this particular crock of a story was repeated in two of our most notoriously undiscriminating blogs. What can one say? If your normal practice is to repeat almost anything that anybody says, then you will, indeed, publish almost anything. However unsupported the story is. However unlikely it may be.

[Thanks to Angus French and to Colin McGourty at Chess In Translation]
[Department of a Likely Story: Chessboxing, Bobby Fischer, Richard Desmond]
Posted by ejh at 7:55 am

Does it really matter? Seems an odd thing to make up. My money is on her being a WCM.

There's a possible element of truth, given that she's Russian. Some form of internal title awarded by the Russian chess Federation perhaps. If you substitute "serious" for "professional", the age 15 claim cam make sense. The wording Candidate of Master may read better as "Candidate for Master" in other words a promising player.

You need an expert in the internal workings of Russian chess at lower levels to establish any validity to the claims.

Does it really matter? Only if you think it matters whether what people say is true or false.

It would be possible to believe a story that she used to play chess and was considered promising until she took up modelling. If publicity starts implying that she has an international title and played at a "professional" level, these points can be validated as the chess world keeps reasonable records of its stars.

In other news of exaggerated claims, it appears that reports indicating Sky Arts would be covering the London Candidates was speculation and no such TV coverage will take place.
RdC