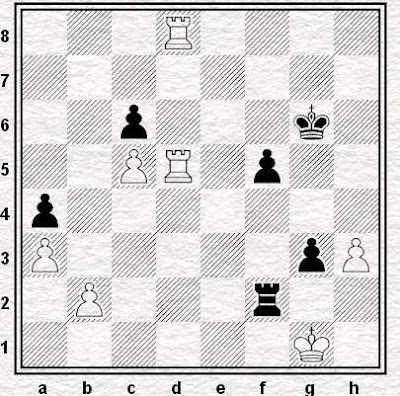 So here we are at the first rest day. Already just that little bit closer to an answer to the question that's on everybody's lips: how many rook endings are we going to get in this Candidates' tournament?

Answer so far: none. None whatsobloodyever.

Before we march on the IET building to protest at this outrage, however, we might first ask ourselves how many games might we expect to end up with just rooks and pawns on the board. It's not as easy to answer that as you might think. 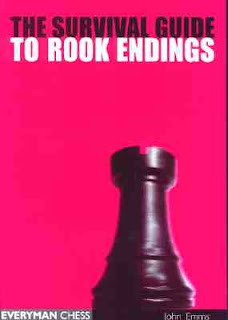 Good stuff on the inside, utter cobblers on the outside

The back cover of John Emms' book The Survival Guide to Rook Endings makes the rather unlikely claim that a rook ending will occur once every five games. That would give us the rather splendid prospect of eleven cropping up at the Candidates', although I fear that's simply way too optimistic.

De la Villa's figures are rather more believeable. 8% for single rook endings, he says, rising to 10% if we count games where both sides have two rooks on the board. "I have recently read that 20%! of the games involve a rook ending... ", he writes before observing rather tartly, "... of course, that was an ad from an endgame book, and we know how these things work",

Anyhoo, one in ten would mean we might have hoped to see the rooks and pawns getting busy by now. If, that is, de la Villa's sample applies to our Candidates.

The 8%-10% number comes from considering games played by anybody in any circumstance. We're talking about eight of the very best chessers in the world. Does that make rook endings more likely or less? Does the fact that they're playing in a qualifier for a World Championship match affect the probabilities?

What, when it comes down to it, do we actually mean by "rook ending"? 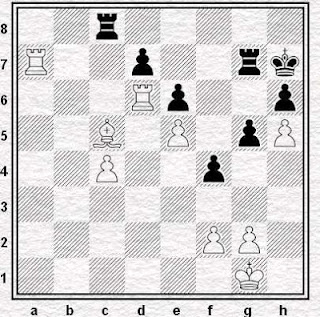 Black to play
Draw agreed
The world championship match tournaments of 2005 and 2007 are probably the closest equivalents that we have to the current Candidates' tournament. The position here reached in Adams-Polgar in the second round at San Luis 2005. Is it a rook ending? Clearly not - there's a bishop on the board! If they'd continued Black would have had to play ... Rxc5 and we'd have our rook(s) and pawns position, but they didn't so she didn't so it isn't.

OK, but what about the position at the head of today's blog. Also from San Luis, also agreed drawn with before Black could play a forced recapture. A rook ending, obviously? It looks like one, I grant you, but before the last move the position looked like this: 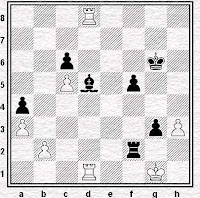 White played R(1)xd5 and then they called it a day. No moves played in the rook ending so does it count or doesn't it? Trees falling in forests and all that.

So depending on how generous you are with your definition and how you do your rounding up, you end up with 7 or 8 of 56 games in San Luis reaching rook endings which is somewhere between 12% and 14% of the total. However you count them, though, that's an awful lot more than the zero% we've had in London so far.

Magnus, Vlad, Levon et al better get their act together and soon. Otherwise I might well have to stage a protest in the tournament hall.

I checked my personal archive using the selection of at least one rook each. This came up with 15% of my games reaching rook endings.

I expect style of play and choice of openings comes into it although I would hesitate to suggest how.

Testing against other databases suggests the "normal" proportion is 11% to 12%.

The test excludes positions about to become Rook and pawn endings.

I am sure I have an endings book which gives the % figures for each type of ending, based on one of those databases with millions of games. (Currently I don't have the time to look at all my endings books to find out which one.)

that could well be de la Villa's book 100 Endings You Must Know. He has a whole table of percentages as you describe and that's where I got the rook ending stats

@roger: might your 15% include games where you both had a rook but also a bishop or knight each or what have you?

I've got you beat anyway, btw, re: my percentage for rook endings this year. But more on that next Monday - assuming the Candidates' having got their arses in gear by then.


I ran a material search for positions without Queens, Knights or Bishops. Once I'm past the adjudication era, the frequency of any endings increases.

Unwillingness to agree short draws would increase the frequency of endings as well.