#16: rook plus f and h pawns against rook 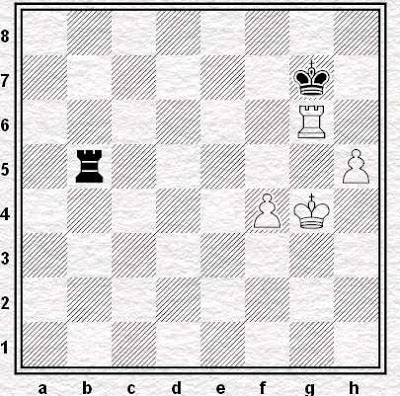 An important branch of endings of this type is the endgame with the BP and RP pair, which as been met repeatedly in tournament practice. When Marshall drew such an ending at San Sebastian in 1911 against Rubinstein, theoreticians set about a detailed analysis of it. Spielmann, Rabinovich, Belavenets, Maizelis, Zek, Keres and finally Botvinnik together with Ragozin and Flohr discovered many interesting ideas. All the same, far from everything is clear in the assessment of this ending.
Levenfish and Smyslov, Rook Endings (Batsford, 1971)

Well Lev and Smyzz my old mukkas, as Kenneth Wolstenholme would say: it is now.

We live in a world in which "Nalimov" has become a verb. As in,

"I wasn't sure about the assessment of that ending, but I Nalimoved it and it turns out White mates in 48 moves."

Since six-piece tablebases are freely available online - see, for example, Roger's comments on recent Rook and pawn posts -  everything is clear about rook plus f and h pawns against rook. Even the most controversial of positions have been robbed of their mystery.

Take the position at the head of today's blog, for example. It crops up everywhere, and yet nobody seems to agree with anybody else as to what's actually going on.

Jesus de la Villa:
1 ... Kf7!
"If other circumstances are equal, the defending king is better placed on the f-file rather than on the h-file. However, 1 ... Kh7?! is not losing either."

Three authorities, three opinions. ... Kh7 loses, it draws but isn't the ideal choice, or it's the best of all possible worlds for the defender.

What to make of that? Without Nalimov we'd be all at sea, or at least relying on our own brains to work it out (which in my case would be the same thing). These days, though, there's no debate at all. 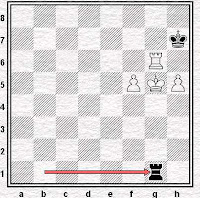 actually forcing the White to play the move our old comrades say is so frightening. Indeed, the tablebases confirm that this is the only way for the defender to save the game. 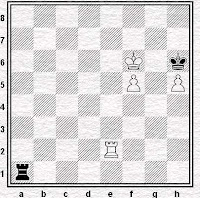 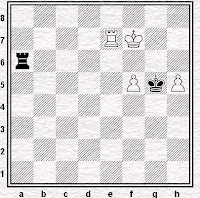 Which is all well and good except that it turns out 10 ... Kxh5 also saves the day so there's no real need for that exclamation mark.  Worse than that, 6 ... Ra6+?? is actually an outright blunder after which White can win with 7 Kf7! In fact, according to the computer the check loses two moves quicker than snatching the pawn.

True Black can always go 6 ... Ra7.  Then 7 Re7 Ra6+, 8 Kf7 is a plausible way to reach Emms' final position. Still, although what's "simpler" is always going to be a subjective judgement, the play that follows 1 ... Kh7 can't be that easy if both Spess and Emms can go so badly wrong.

So are we left with Jesus de la Villa as the source of all wisdom? Well, we might be if there aren't any mistakes in his analysis too. That's certainly not something we can take for granted, though. Not when we know that his otherwise wonderful book is littered with errors and typos.

Happily, though, in this case de la Villa's analysis is fine*.  No debate and nothing to discuss.  The lines that he gives start off drawn and stay that way. 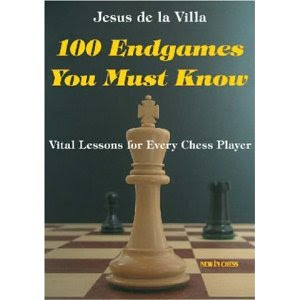 I can't say I have much of a clue as to what's going on in rook plus f&h against rook positions. They really are just so impossibly difficult.

Still, the databases are a great help. You can get yourself in a pickle using them if you don't really understand what they're telling you - something I'll come back to at some later date - but they really are a fabulous training resource.

Mr WhoeveritwaswhoarrangedforNalimovtobeinternetaccessible: I tip my hat to you.

* Although I did notice another couple of mistakes to add to the 19 I listed in SMA#11: on page 163 there are two mentions of "Ending 58" which are clearly supposed to be references to Ending 57.
Posted by Jonathan B at 8:00 am

The chesspub people also reckon Speelman's ECE stuff is wrong; no idea how. In practical terms 1...Kf7 has to be right, I'd hazard (i.e. fewer/less natural losing moves available thereafter).

However, the main point is your use of the word 'mainline'. In my vocabulary this is a verb, meaning to consume a good deal too much heroin or similar. The phrase you are looking for (still IMNSHO) is 'main line'. 'Mainline' is this sense is QualityChessspeak and to be abhorred.

Thanks John. Abhorred and ammended.

Where does John stand on "chessplayer"?

Not my choice but not abhorrent. I rather like this site's old-fashioned 'chesser' or 'chessist', affected though it obviously is.

You know I thought I'd invented 'chesser' myself. I remember not being sure about chess player or chessplayer at one time and eventually just thought "bugger it" and went for one short word.

It was only much later that I discovered it was what they used to say in the olden days.