... and admitting it matters even more 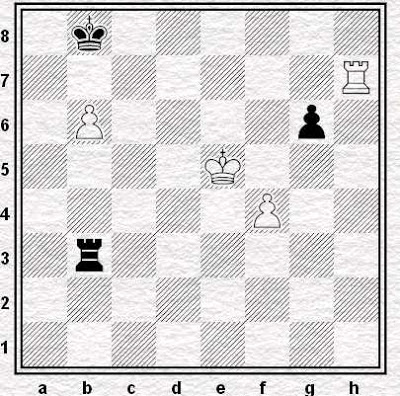 
Today we're all about luck. Luck and rook endings.

Fortunate rook endgames and the writings of Test Match Special new boy Ed Smith made me realise something: it's not the idea of luck in chess per se that I dislike so much, it's the luck narrative.

What Sport Tells us About Life. It sounds like something that Mig Gazza would write, doesn't it? It is, in fact, a half-decade old book by pro-cricketer, journalist and radio commentator Ed Smith. And what exactly does sport tell us about life? Quite a bit, it turns out.

For now we'll focus on the eighth chapter - the one from which the title of today's post is borrowed. 9 short pages that Smith later parlayed into another interesting tome (LUCK: What it means and why it matters). The essence of his idea, though, can be found in a passage from the earlier work.

Sitting around waiting for luck to come your way is as misguided as thinking that good things always come to those who 'want it enough'. The truth is that determination and desire are necessary but not sufficient. We have to try like crazy; we have to retain a relentless sense of determination; we have to make sacrifices and take the road less travelled. And yet there are still no guarantees. Even after all that, we may come up empty-handed.

(my emphasis)
Ed Smith: What Sport Tells us About Life, Penguin 2009


Note the slant here. For Smith it is the absence of recognition of the concept of good fortune that makes it's acknowledgement all the more important. 'Luck' might be unfashionable politically in a meritocratic world*, it may not be useful in a sporting context where championship-winning careers are unlikely to be forged in a warm bath of comforting excuses, and yet it exists all the same. Ignoring it doesn't make it go away.

And here we reach the nub of my problem with how the concept of luck is (ab)used whenever chessers gather together. The irony is that whilst outsiders - Smith included - usually make the mistake of considering chess to be a game without luck, for those of us within the chess world it's often the explanatory tool of choice.

We are the very opposite of the world Smith describes. We wonder why the result of any given game went one way rather than the other and what we don't really try to understand we ascribe to the magic of fortune. Where victory on the chessboard is concerned, the truth is that while luck might be present, necessary even, it is never sufficient  in and of itself. 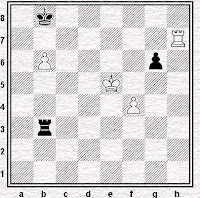 
Having spent an entire post banging on about how luck is talked about far too much, let me talk about luck for a bit. That special kind of luck that every chesser knows - the art of being right for the wrong reasons.

Today's rook ending could have arisen in Dominguez-Perez v Topalov, Thessaloniki 2013 had Toppy retreated his king to b8 rather than chomped the b6 pawn as happened in the game. It's an idea that generated a bit of chat over at the EC Forum recently.  I already fessed up to one instance of 'correct assessment, faulty analysis' on the thread. Here's another,albeit of a different stripe.

using the time to eat the g-pawn and force a queen on the f-file. Black's king looks miles out of position - it's four whole tempi away from where it wants to be - but eventually I concluded that after

it would be a draw. Turns out that I was sort of right. Sort of.  Tablebase confirms the final position is drawn, but the one after Black takes on b6 with check certainly isn't. One of White's next four moves deserves a "??". Which one?


* Smith mentions that in reality the present orthodoxy is more concerned with the idea of meritocracy than the practice. I was reminded of this rather tart observation just last week when James Caan's critique of a society "where people get jobs based on who you know rather than what you can do" was immediately followed by the revelation that he employs his own daughters.
Posted by Jonathan B at 8:00 am

Not the only Middlesex cricketer to get an England cap he should never have got near (a Middlesex fan writes).

Thanks for that Tom.

The one on sportsmen with Messiah complexes is a good read - and not completely irrelevant to the chess world, I'd say.

Is 3. Rh6 the improvement? Threatening f5 if black moves the king? Or does that not help white?

That's an interesting idea Nonny - it hadn't occurred to me at all.

My instant reaction is that possibly the rook might end up rather inactive on h6 and the couple of moves it would take to get it back into the game might save Black. I'll have a proper look this afternoon.

For the meantime, let's just say that it wasn't the idea that I had in mind.