Funny business this blogging. You get what you think is a clever idea for a headline - and then have to go and find the story to hang on it (hoping all the while that no one else had got there first). Anyway, this time patience has been rewarded - a likely candidate turned up: John Townsend's recent volume Historical notes on some chess players... 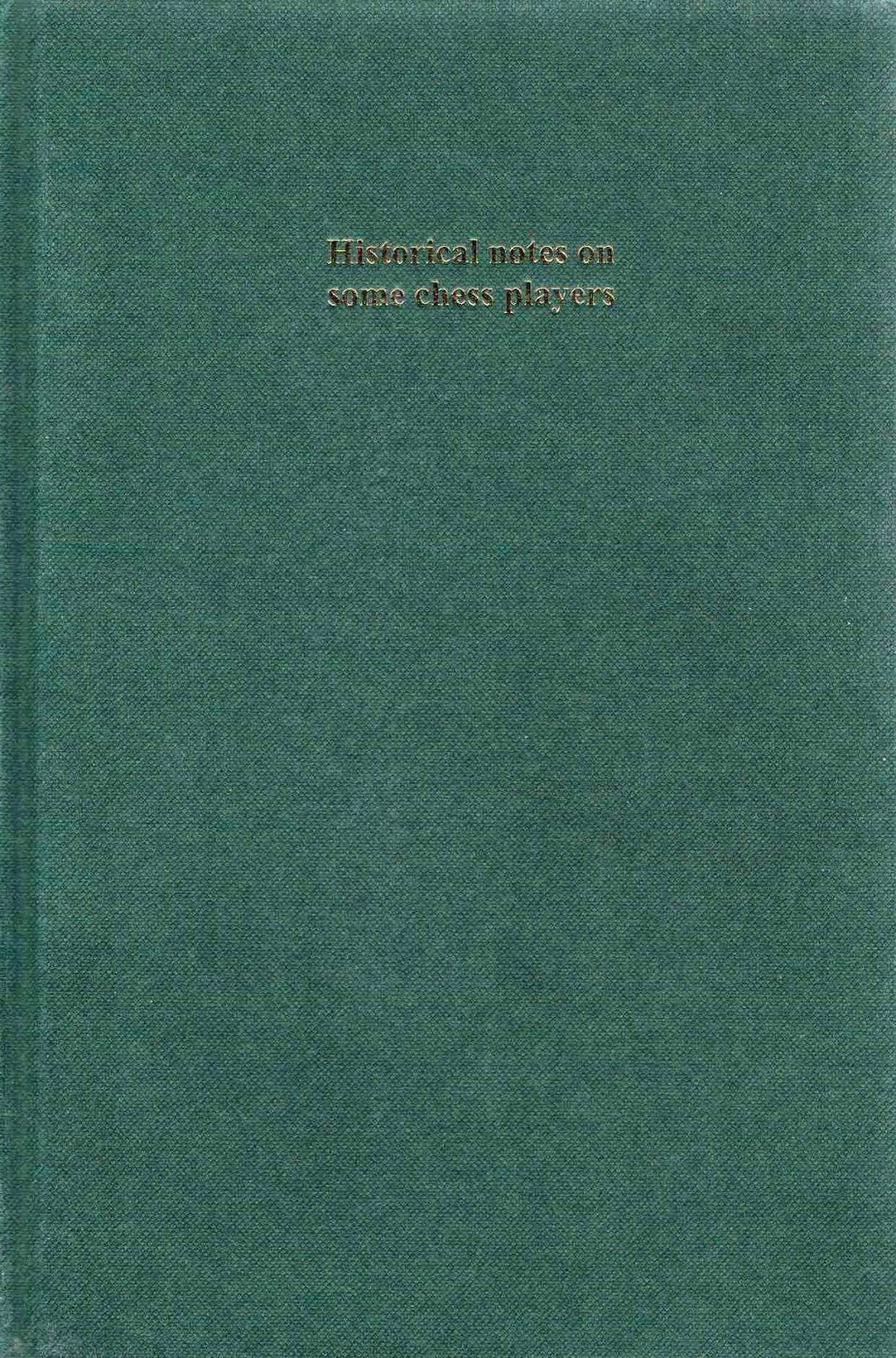 ...just as it plainly says on the cover.

It is the fruits of research by a chess historian of enviable doggedness and diligence; one who doesn't overly rely on re-cycled, ready-made factoids, secondary-sourced from contemporaneous chess mags of the day. He is thus definitely not (to plant a shamelessly self-serving plug...of sorts) in the manner of your blogger, for example in Brixton Byways. John, by contrast, scrapes back to bed-rock, to solid foundations, to brute facts exposed by scrupulous examination of primary data, even if at the outer limits of documentation. Genealogical research is his métier - it must be in the blood.

His book is about barely remembered chess personalities from the first half of the 19th century, or a bit sooner or a bit later; and - at the risk of sounding presumptuous - Byways etc does have something in common with his matters of factness in a certain respect (and nor is this the resonance in question), as revealed in his preface:


"There are certain enthusiasts who are not content with purely technical aspects, such the games of the great masters. They want to know where the famous match was played or where a chess club met so that their imagination can soak up the local topography of the scene, how old the protagonists were, what kind of families they were born and married into, what education they received...In short they like to see chess encounters in the wider context of the players' lives..."

Now that's what we like: we want to know about the men, and women, in their time, in their milieu. Not just what they did at the board but, if not quite what they had for breakfast, then with whom they ate their dinner; what, in short, they also did not at the board.

The first chapter is the fruit of research into members of the London Chess Club during its 63 year existence (closing its doors in 1870); not so much the familiar names, such as Bird and Wyvill, or the foreign visitors such as Anderssen and Morphy (aha!) - all of whom have put in brief appearances on our blog - but lesser lights, ordinary Joes, and it is the latter types that the book examines in detail. Naturally we have combed the names that John has found in the LCC membership lists to see if there are other old friends among them - who might also have played chess in Hereford in 1812, for example. But no resonances there, alas.

It is different, though, when we get to the chapter on Charles Smith, who spent time in Bethlem in the 1850s. It is a salutary tale from which there is a deafening echo from our blog series Asylums, because Smith would have been in Bethlem at the same time as Richard Dadd and Edward Oxford. Would he, I wonder - resonantly - have played chess with them?

Smith - who incidentally, was the subject also of a piece by Tim Harding - may have left only a small footprint on the royal road of 19th century chess, but he composed an unfussy, elegant, and amusing - to my mind anyway - self-mate in which White compels Black to mate him with his sixth move. You could find it in the Chess Player's Chronicle for 1847; but John's book offers a more convenient way to enjoy it.

We also find out more about Charles Stanley, who we stumbled on in the story of Anton Rosenbaum's mass chess portrait; hence another sympathetic vibration with our own efforts; and we learn more about Jacob Sarratt, too, who played chess in the earliest part of the C19th. He also wrote the odd book, for which reason he pops up in another series on this blog by occasional S&B blogger Richard Tillett (here), although little of Sarratt has otherwise come down through the years. Sarratt also puts in an appearance, in the oddest of circumstances, in John's note on another almost lost chess player, Charles Brand, who also had the misfortune to be confined to an asylum, and was handy with a cricket bat (find out from the book if these two items were connected).

A piece of work-in-progress updated in the Notes... is John's heroic project to reconstruct the murky family tree of Howard Staunton who once lived in, then rural, Streatham. Staunton, it is said, rebuffed the overtures of Morphy for a match to establish supremacy. If you go with certain analyses of Thomas Eakins' celebrated chess painting of 1876 (discussed at length here), this challenge was symptomatic of the emergence of the New World no longer in thrall to the Old - as reverbed in the Anglo-American diplomatic stand-off that engulfed Charles Stanley and Anton Rosenbaum in the same period.

One particular name cropped up in John's tentative Staunton lineage that gave me a resonant pause: a possible descendant by the name of John Wilson connected with Lambeth - which had me all a quiver because of a chess player with the same name in Brixton Byways (another plug). But sadly I have been disabused of that happy thought: the dates don't fit, and it is nothing but unhappy coincidence.

Staunton still excites fascination and controversy 140 years after his death (anniversary in three weeks). Tim Harding's Eminent Victorian Chess Players (another chess historian of impeccable professional practice) provides evidence in the debate as to whether Staunton ducked the match with Morphy, or was legitimately pre-empted by contractual calls on his time to finish editing a work on Shakespeare. Which brings us to a minor harmonic in the major chords of John's book, the modulated tones of two model chess historians engaged in scholarly debate - with John replying in a couple of places in Historical Notes to observations in Tim's EVCP on John's earlier Notes on the life of Howard Staunton (2011). It adds a light frisson to the read.

It may not be on everyone's "must have" list, and the exposition, like the cover, pretty much dispenses with superfluous ornament and rhetorical flourish, though it is dusted with a sprinkle of dry humour. It will certainly appeal if you are interested in what is to be found in the hidden crevices of chess history. To order a copy visit John's website.