Good Lord, that book is published by Sam Sloan. Your life as a credible author really is over when he gets to publish you.

So a friend of mine wrote about this recently-published volume. He wasn't wrong. 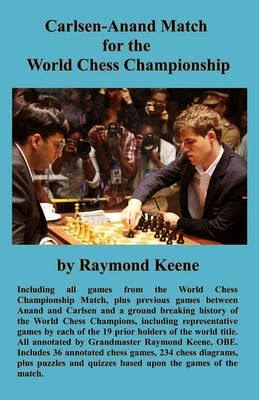 Of course Ray can still occasionally get a gig with a reputable publisher, but as they necessarily become disreputable as a result of employing him, perhaps there's a case for cutting to the chase and sticking with the less reputable ones.

I hadn't really intended to write about this book, solely because I have no intention of shelling out any cash to buy it, but a comment on the English Chess Forum piqued my curiosity, or to put it another way, seemed keen to do my job for me.

He's not wrong, either.

That's the full notes in the Spectator. Here's some chunks out of the Sloan book for the purpose of comparison.

There's a couple of sentences ("Black is driven back on all fronts", "In fact modern computers prefer...") that aren't in the Spectator, and there's this long note

which isn't there either, but most of it an almost perfect copy-and-paste job. So did Ray actually write the extra bits for the new book, or are they there from other, older versions of the notes? Readers are invited to tell us.

Ray also does Lasker-Steinitz from Hastings 1895. As we'll see, he's done that game - and that set of notes - several times before.Not that you'd know this from anything in the book.

Obviously, one might cynically add, but in fact on this occasion the book does include some kind of notification that some of the notes have appeared somewhere else before.

One wonders why - because Ray has had his knuckles rapped at the Times? Because those notes will have been so recent that readers couldn't help but notice, particularly if Sloan and Keene couldn't be arsed to update them from "their daily report format"?

Who knows. Anyway, there's no mention that any of the other notes have been copied from - or "substantially based on" - any earlier notes. Especially not Staunton-Horwitz.

Or Lasker-Steinitz. Here's the finale.

The whirlwind finale, indeed. As it was in Ray's Times column for 30 December 2010.

which is identical to this

Again, it would be interesting to know whether the extra bit was actually written for the book, or for some earlier source. It's certainly not the Spectator for 20 May 2006

though plenty of the other notes look quite familiar. (I also like the recommendation of the Predecessors series which "always represents a good investment for the enthusiast". So it does, Ray. So it does.)

Everything above is from the Times and the Spectator (though naturally one assumes that all Ray's old notes have appeared in multiple locations) and the same is true of much of what follows.

The Chess Combination from Phildor to Karpov (Pergamon, 1977) where most of Ray's notes to the 1968 Botvinnik-Portisch game can be tracked down. 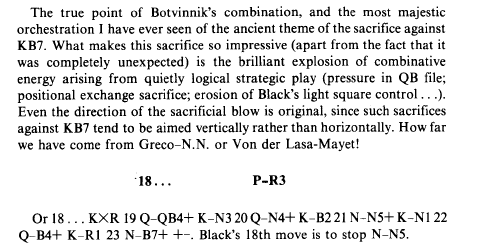 You won't find all the notes from the Sloan book in Chess Combination though. Not these, for instance.

Not at all. These ones are all copied out from the Spectator, 20 May 1995. If nowhere else.

Then there's the notes to Anderssen-Zukertort, some of which 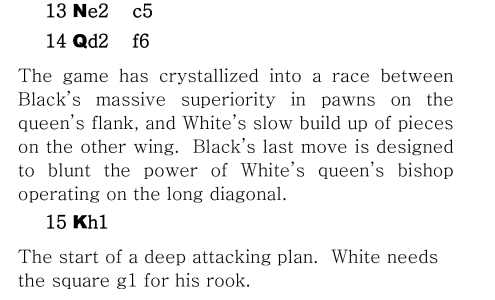 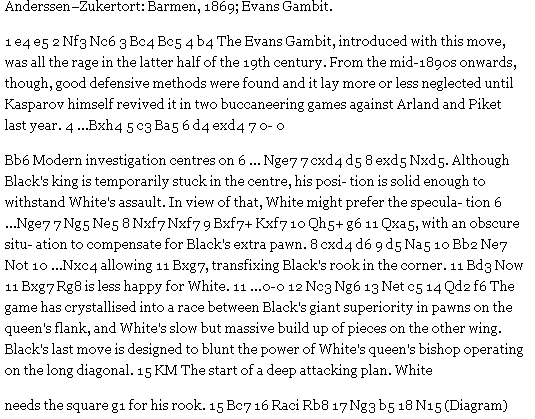 or indeed the same publication for 16 September 2000. 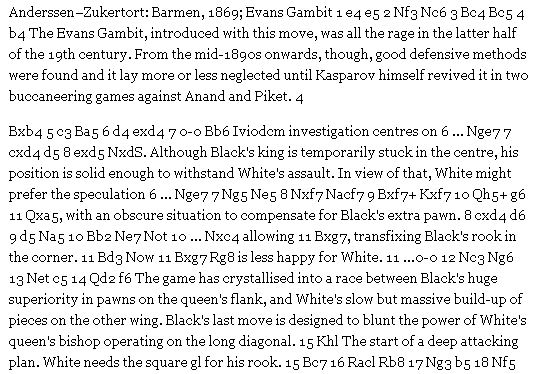 And if the Spectator reader recalled the notes from the issue just three weeks later, 7 October 2000 - as Ray, or his filing system, evidently does - 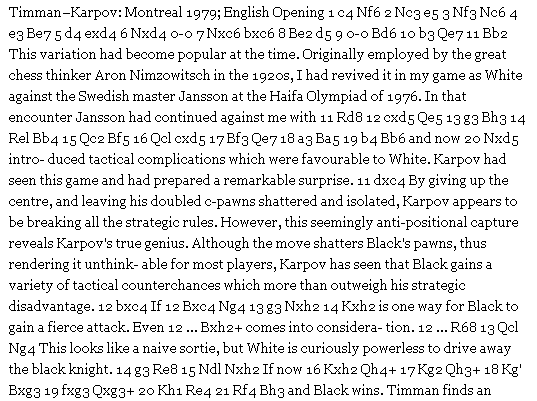 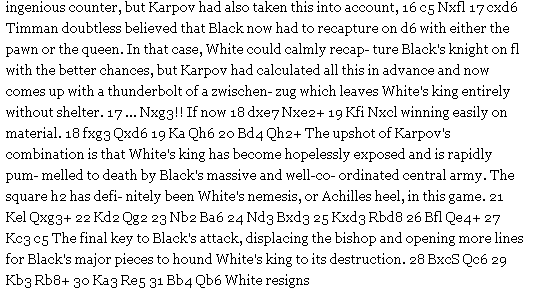 then they wouldn't see much in the notes in the Sloan book that they hadn't seen before. 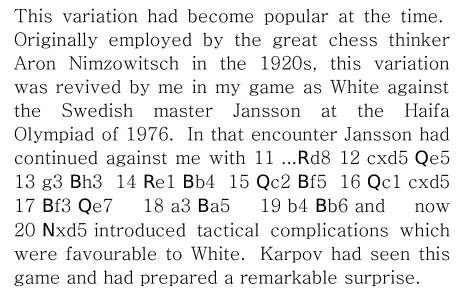 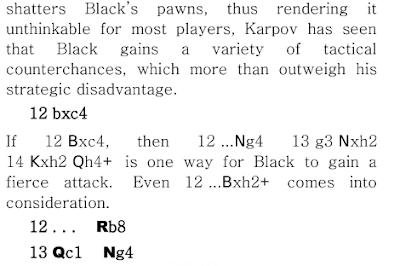 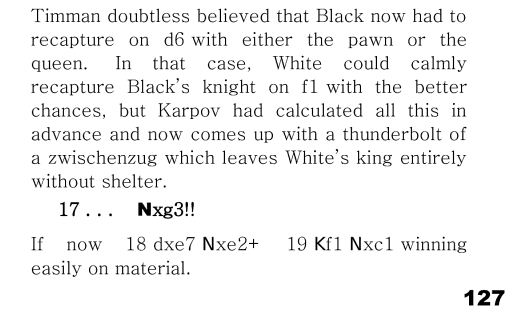 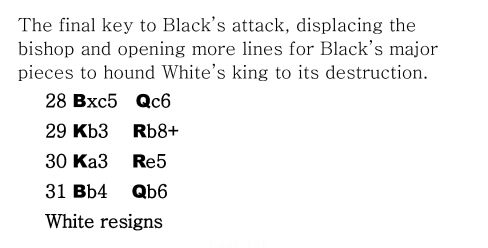 And that's your tawdry lot. No doubt there's more than this, but you'd have to buy the book to find out. And if Sam Sloan wants me to buy a book that's just a copy-and-paste of things we've seen before, he's got another think coming.

More on Sam on Friday.


[Thanks to Peter Farr, Angus French and Pablo Byrne]

There is nothing wrong with an author taking articles he published in a newspaper such as The Times or a magazine such as The Spectator and re-compiling them and re-printing them in a book. This is especially true where we over here in the USA have probably never read either The Times or The Spectator so the material is new as far as we are concerned. What is a problem is you have copied and pasted large parts of Grandmaster Keene's articles which far exceed "fair use" so you may have committed a copyright violation since you obviously did not have Grandmaster Keene's permission.
Sam Sloan

There is nothing wrong with an author taking articles he published in a newspaper such as The Times or a magazine such as The Spectator and re-compiling them and re-printing them in a book.

Yes there is: it's not only copyright violation but it deliberately deceives the purchasers of the book.

If you thought there was nothing wrong with it you would have advertised to the readers of the book that the material had been previously published.

(It is also farcical to claim that people in the USA have probably never read publications which are in fact available online.)

(1) It is well within the terms of "fair use" since it is necessary to demonstrate the full extent of the copying and pasting in which you and Mr Keene have engaged. I am quite sure you know this.

(2) It is absolutely hilarious for you to illictly copy and paste to the extent you have done so, and then claim copyright violation on behalf of a copyright which you had no right to claim anyway.

I look forward to Grandmaster Keene claiming copyright violation in a court of law. This would be one of the most remarkable court cases in the history of jurisprudence.

There is something very sad about Keene' decline.

From someone who is a serious top flight player to someone who doesn't actually play chess any more.

From writing serious, good books published by major publishing houses to publishing cut - and - paste crap published by Sam Sloan, US chess' designated crazy uncle in the basement, which is worse than self - publishing.

From getting an OBE from the queen to accepting "titles of nobility" offered by a fake con artist "prince".

From organizing world chess championships to mailing in plagiarized columns about them.

Keene' hubris was clobbered by nemesis, as Brian Aldiss once put it. He did it to himself - he thought he could fool all of the people all of the time. He was wrong. Nobody takes him seriously any more.

A sad fate to a man who once held so much promise for chess. But don't you think he wasn't punished for his misdeeds. He was, quite harshly too. Only by himself, not by others.

Sloan also figures, in all his disgusting misogyny, in this blog post:

And the 2014 edition of the match book is, I think, unique in the history of chess publishing, making Bjelica and Schiller look like Murray and Winter by comparison:

(Scroll to the end)

The diagrams are brilliant, aren't they?

As far as I can see not one stroke of work, on Ray's part, went into the production of the book.

I'd not seem Sloan's appalling notes. What a horror the man is.

Sam cheapens everything he touches.

For example, Ishi press published a 19th century book about the battle of Gettysburg by the Comte de Paris (Louis Phillippe d'Orleans).

Well, at least that book is in the public domain. Alas, Sam added an introduction - available from the "look inside" amazon.com feature.

Need I add that it is puerile, written in awful, almost pidgin English, and full of spelling and grammar mistakes?