All of the panelists who participated in this conference and contributed to the writing of this statement were identified as having no financial or scientific conflict of interest, and all signed forms attesting to this fact. Unlike the expert speakers who present scientific data at the conference, the individuals invited to participate on NIH Consensus and State-of-the-Science Panels are reviewed prior to selection to ensure that they are not proponents of an advocacy position with regard to the topic and are not identified with research that could be used to answer the conference questions.


There’s not going to be a pawn ending today. Nor will there be for the next few weeks, I suspect. The chess and dementia stuff has rather kicked off as late and if I only have time to do one or other of these posts - which I do - it’s Doctor Garry that I’d prefer to write. 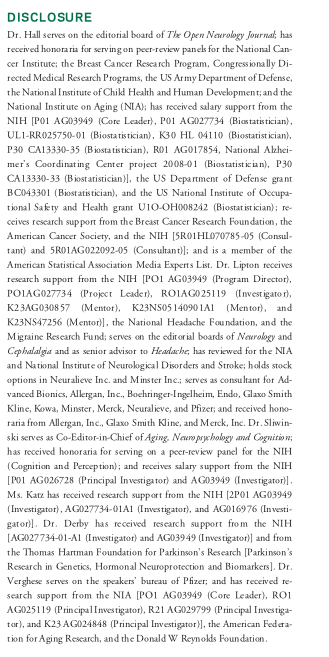 Over the last 15 months or so there have been a tonne of things that I wanted to cover in this series without ever quite finding the time to  get around to them. One of these is disclosures.

If you read the academic literature that’s relevant to chess and dementia you’ll often find statements like the one at the head of today’s blog. Sometimes it will be called something else, e.g. Barnes and Yaffe 2011* page 8:-


KY has served on data and safety monitoring boards for Pfizer and Medivation, and has received board membership fees and travel


or accommodation expenses from the Beeson Scientific Advisory Committee and consultancy fees from Novartis. DEB declares that she has no conflicts of interest.

Usually they will be at the end of the article, although sometimes you’ll find it embodied in the main text, e.g. the section  "Role of the Funding Source" which can be found in Ngandu and others (2015)** page 5:-


The study funders had no role in study design, data collection, analysis, interpretation, writing of the report, or the decision to submit for publication.

Sometimes it’s really long. The disclosure statement that appears on the left, for example, which is taken from Hall and others (2009)***.

This seems to be something of a more recent fashion. You won’t find a disclosure statement in the Verghese article which was published back in 2003, for instance. More and more, though, you get something like this in articles that appear in academic journals.

Why? A growing awareness that a conflict of interest can bring an unwitting bias to what you do - even if you try really really not to let it happen. A greater realisation that sometimes academics who write papers may have motivations beyond the immediately obvious (see Ben Goldacre on Cyagen, for example).

All this is quite a contrast with what goes on in the chess world. Academics think about conflict of interest even when there isn’t any. For instance, Hughes and others (2010)****:-

Declaration of Conflicting InterestsThe author(s) declared no conflicts of interest with respect to the authorship and/or publication of this article.


Chessers writing about dementia? They never mention it. Even though it’s absolutely central to what they’re doing.

It’s not so much that I think Kasparov, Polgar Keene, Garcia, Davies, Chessbase and all the others should declare a conflict of interest in a formal way when they write about chess and dementia. It’s more that one time - just one time - I’d like to see some evidence that they’ve thought about it. That they’ve reflected on the conflict between their interest in promoting chess (and/or themselves and/or their mates) and their interest in making a positive contribution to how dementia might be tackled. That they’ve wondered whether their - entirely reasonable - desire for the former is colouring their view of the latter.

I suspect that the reason that this doesn’t happen is that with the exception of Leonxto Garcia, none of those listed above actually care much (if at all) about dementia anyway. So there is no conflict of interest. There’s nothing more than 'how can we promote chess' (and/or ourselves and/or our mates).

For full references for all of the following (and links to the original texts where available) see the Journal Articles section of DG: The Knowledge Pile

In the live broadcast of the Sinquefield Cup Rex Sinquefield recently announced that he is financing a study about chess and dementia. So, sooner or later you'll get some more material about this, especially about the conflict of interest part.