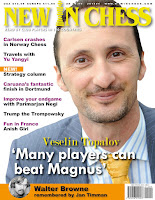 In the course of his long complaint about how unfair journalists are being to him, Nigel Short unaccountably fails to mention how scientists responded to the comments he made in NiC 2015#2.

He might for instance have cited Dr Dean Burnett, of the Institute of Psychological Medicine and Clinical Neurosciences in Cardiff, who wrote:


While there are differences between male and female brains, there aren’t as many as most people believe, certainly not one that would be so stark and specific to mean differing aptitudes for a specific board game. (Calm down, dear: the dark side of ‘emotional intelligence', Guardian, 21 April.)


The evidence is clear that in terms of the, kind of, key skills and key structures of the brain there's very little difference between male and female brains.

She proceeded to attribute most of the differences in performance between the genders to societal expectations and to explain that the brain itself changes in response to experiences. (The programme is available online at http://www.bbc.co.uk/programmes/b05r3td.)

Nigel may disagree with this - and it's a legitimate discussion - but as long as he considers himself the victim of a "feminist lobby" which is "shrill" and "tyrannical" he may not be the most reasonable judge of evidence. Indeed, one recalls that in his original article he referred to the statistical work of Bilalic, Smallbone, McLeod and Gobet as an "absurd theory" and proceeded to declare:


only a bunch of academics could come up with such a preposterous conclusion.

If Nigel wants us to believe that he's interested in scientific evidence, a good way to proceed would to be to behave less ignorantly towards scientists.

Personally, I propose that Nigel approaches Professor Rippon for her advice before writing again on the subject. He might have to explain, though, why he referred to women as "totty" in NiC 2012#7, a term Professor Rippon is aware he used, since she quoted him as using it.

It may be this kind of thing, "innocent" anecdotes about women drivers aside, that people consider "conclusive proof of sexism". One could also cite his complaint in NiC 2010#5 that Cuba wasn't sufficiently good for "sex tourism", or his promotion of the website World Chess Beauty Contest (New York Times, 27 November 2005) or any number of other incidents in a long career of puerile sexism.

The problem for Nigel is not really that people fail to read what he writes. It's that they read, and they remember.

[Previously unpublished]
[Nigel Short index]
Posted by ejh at 9:55 am