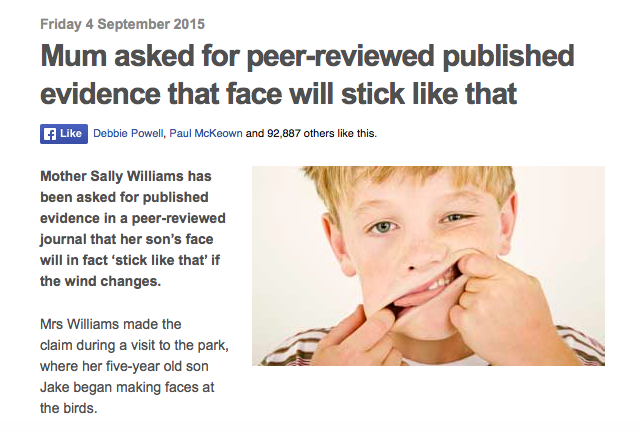 I think I like that kid. That pretend kid, I should say. Yes, on the off chance that Jack Warner might wander by today, I should probably start by making absolutely clear that News Thump is a website that publishes spoof news stories.

Wee Jake Williams might be made up, but Sense About Science’s #AskForEvidence new programme aimed at school children is absolutely real. Do you think that if I asked them nicely they’ll do one for the English Chess Federation? Why the need? Well, depressingly, the the ECF has got itself involved with chess and dementia of late with this statement


from Non-Executive Director John Foley in a piece for the Sport and Recreation Alliance. 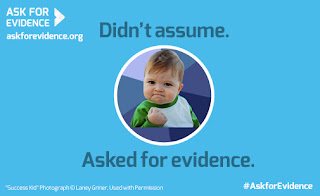 Anyhoo, back to Jake’s mummy.

We asked Mrs Williams about her parenting approach and she told us, “Honestly, you people are killing me here.”

“Only last week he conducted a series of experiments that conclusively determined that your nose stays exactly the same size no matter how big a lie you tell.”

“Whoever said knowledge is the key to freedom clearly didn’t have young children.”


Clearly Mrs Williams’ error is not to be running a compulsory membership scheme. If she’d had the foresight to have introduced one a couple of years ago she could now say anything she wanted,

for instance, and simply ignore young Jake’s subsequent requests for evidence. Sure, she could launch spirited but ultimately flawed defences of her claims if she liked. Obfuscate by attempting to reframe issues as matters of "opinion" rather than scientific evidence, if she really felt the need. Ultimately, though, with a membership scheme in place Mrs Williams could respond to requests to provide evidence for her claims with a shrug of her shoulders and a "What’s it to you?"

And what could young Jake do then? You don’t get a vote as to who your parents are, so his options would seem to boil down to (a) sucking it up and continuing to hand over his membership fee - did I forget to mention that Jake would be paying for this privilege? - or (b) not visiting another park anywhere in the world ever again. Not much of a choice for a kid who likes playing on the swings.

Mrs Williams wants to say whatever she likes without being asked awkward questions. The ECF have shown the way. Jake’s mum should have thought this parenting stuff through and she really only has herself to blame for her predicament. Frankly, I’ve no sympathy at all.

Chess and Dementia Index
With thanks to EJH

* When I get a moment I’ll return to why I think the missing apostrophe in "Alzheimer’s" may have more significance than a simple typo.
Posted by Jonathan B at 8:00 am