I was watching the World Cup yesterday evening,following the game Domínguez Pérez v Pérez Ponsa in which the latter, needing to draw to make it through to the next round, was struggling to hold on in an ending a piece down: in fact it looked, after a long struggle, which had reached 113 moves, as if he might just have let Domínguez in. 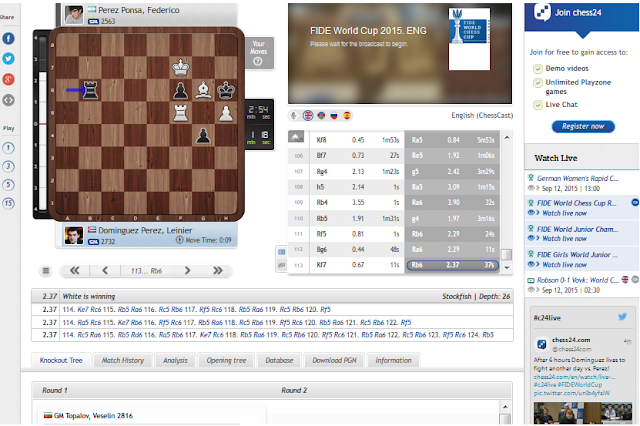 Still, it was far from clear and it wasn't the sort of position where computer assessments tell you very much. So I was looking forward to catching the final stages of the game when, going on to Twitter, I was surprised to see: 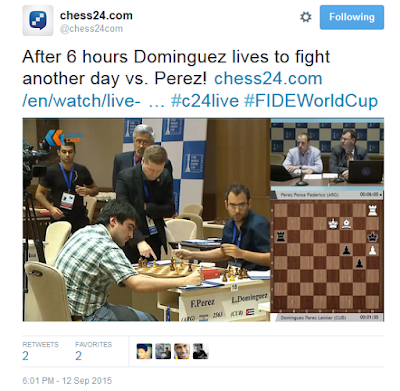 There were the scoresheets being collected. I'd forgotten, there was a delay in transmission to try and combat cheating. Fair enough, but having followed the game all afternoon, I felt pretty cheated myself in having been told the result before the end of the game.

What to do about this? Yes, I could stay off Twitter when following really crucial and exciting games, although you don't know how long the game might on for and you don't know when to start, as it were, abstaining. Still, a couple of extra hours off Twitter wouldn't do me any harm, you might think - but then, it's not really about Twitter, it's about the likelihood of finding out the result of a game when time delays are in place. When it's the first round of the World Cup, it ought, with a bit of foresight,  to be possible (and come to that, it's not so important if you muck it up). But what about the crucial game in a world championship match? How easy would it be to avoid, when it's liable to be not just on Twitter but all over the internet?

Moreover, if you look at the image at the top of the post, basically what I was looking at when I discovered the result, you'll notice that I couldn't avoid being told about the result anyway! There it is - in the bottom right hand corner of the screen. 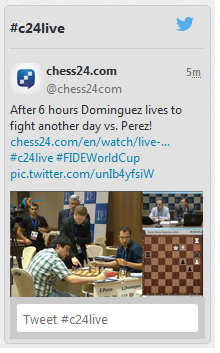 Well, thanks a bunch.

At present I don't see how you can have delayed coverage and reliably avoid finding out the result, something which is fundamental to watching chess, or any other sport, live (or "as live"). It's a problem. Isn't it?
Posted by ejh at 9:55 am

Delays were popular when live move feeds first became popular, but they are, as you suggest, difficult to reconcile with live commentary. FIDE might feel a bit paranoid about this because of the Feller case. This was at an Olympiad were a conspiracy was alleged between an analyst back in France, the French team captain and one of the French players. The method alleged in use was mostly low tech, in that the analyst would use the live feed to analyse positions, text the result of the analysis to the team captain and the team captain would indicate the suggested move by where he stood relative to the games in progress. This was uncovered because the mobile phone used was not owned by the analyst, rather the bill payer spotted the transmissions and queried them. It's unlikely that a fifteen minute delay would have prevented something like this, but it would at least disrupt it.