The night before the Bank Holiday tournament at Golders Green I was drinking with Angus and Dave down the Earl Ferrers, which I knew used to have a chess set, because I've had it on a table in front of me: the barman couldn't find it though (a perhaps superior variation on the usual theme of finding the set but not finding all the pawns) and offered me Jenga as a substitute, a suggestion I declined by use of the eyebrows rather than the mouth. 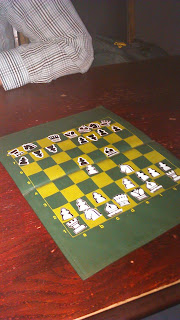 It's a way of playing, and more fun than you'd imagine: perhaps there's not much point in laying traps that you're not going to fall into, but at least you can head for complications in the knowledge that you'll be as lost on the other side of the board as the one you started on. 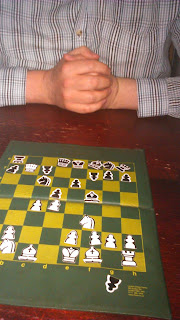 Threehanded has this virtue, too: the teams are bound to be evenly matched. And two of you don't even have to turn the board round (it falls to the same player to do it each time on their turn.) 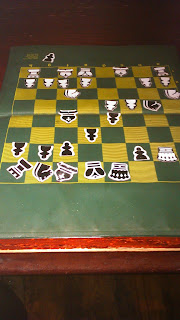 We played two games, of which we won one, drew one and lost one. The second (of which the opening stages are pictured) was a particularly good game.

If only I could remember how it went.
Posted by ejh at 7:55 am