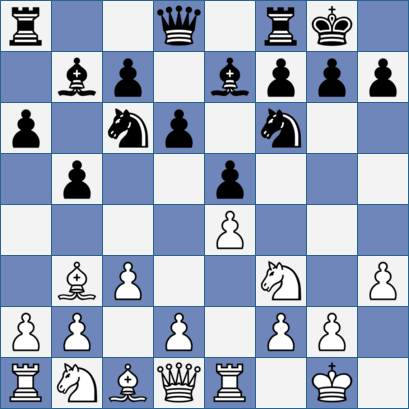 Here’s a post that’s long and pointless: a theoretical survey on an opening that nobody bothers with these days. I’m not even going to be looking at the current state of what’s happening in the Zaitsev variation of the Ruy Lopez. I’m only going to cover what was happening from roughly 1984 to 1995. The closest I’m going to come to topicality is a brief reference to a game played in 2005.

Since you (or at least I) ask, I did it purely to see if I could. To be precise, I wanted to know if I could do it from memory. I’m sorely lacking in chess culture when it comes to mating patterns. This much we know. After last week’s post, I wanted to see if I’d picked up anything at all in nigh on thirty years of chessing.

You want Karpov-era Zaitsev theory? It turns out I’m still your man. I remembered nearly everything. A few details of the game references aside, virtually everything that follows came to mind pretty easily.

It's knowledge entirely lacking practical value, sure, but then it always was. Yes, I was tooled up with a ton of options at move 17 and beyond in the Zaitsev mainline. No, in all the years I played 9 ... Bb7 and 10 ... Re8, nobody ever took me beyond move 12 in a serious game.

So well done me. I have a detailed knowledge of 25-year-old theory of an opening I haven’t played for more than a decade. That’s not an awful lot to show for a life in chess, but at least it’s something. 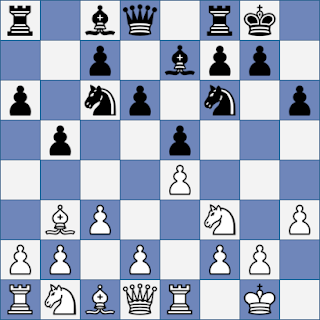 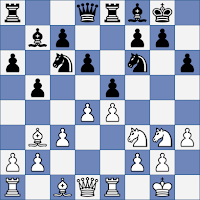 White needn’t fear ... exd4 uncovering an attack on the e4 from the Re8 - a key theme in the variation - because the centre is already adequately defended. 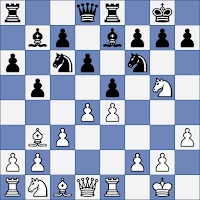 ... Black can simply return the rook to f8 and it seems that White has nothing than to go back to f3. There was a game where Ljubojevic (against Gligoric, it turns out) tried to avoid the repetition and press on with f2-f4 but Black has nothing to fear there. 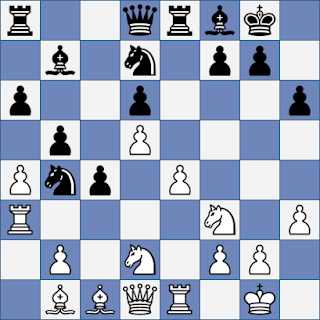 
In the second of the infamous defeats Karpov had played a theoretical novelty with 18 ... Qf6. It seems that he had already discovered a knight sacrifice that Kasparov was intending to play in what had previously been considered to be the main line. Not that anybody else knew that at the time.

Over the next couple of years Sax - Short, Interzonal 1987 and Sokolov - Portisch, Brussels World Cup 1988 made the strength of Nxc4 (after 18 ... Ne5, 19 axb5 Qb6) common knowledge and everybody decided that Karpov, comprehensive drubbing notwithstanding, was right to bring out his queen all along. 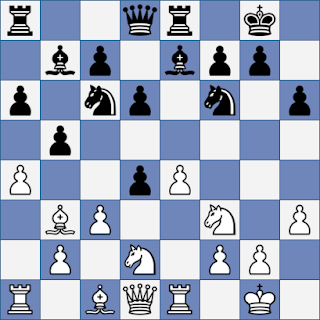 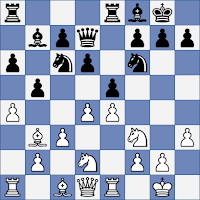 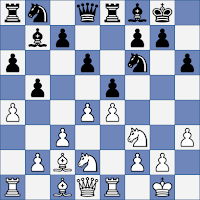 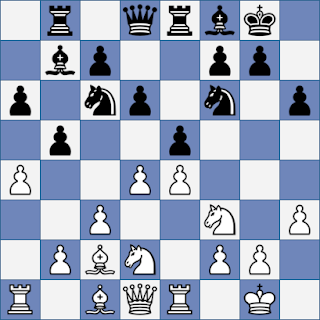 No doubt fed up after getting spanked in the exciting variations, Karpov dialled things down after the ’86 match. He tried ... Rb8 instead of giving up the centre against Timman (at Tilburg) and gave up the Ruy Lopez entirely, swapping 1 ... e5 for the Caro-Kann, during his Candidates’ Final match against Sokolov and again in Seville during Kasparov-Karpov IV. 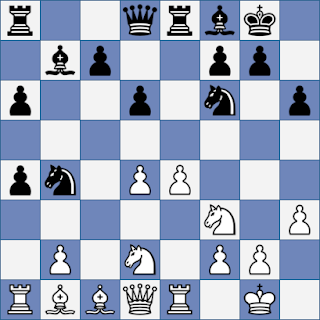 Evidently this was not entirely to his satisfaction, though, and a couple of years later Anatoly returned to the Zaitsev, albeit favouring a different sub-line. 15 ... bxa4 wasn’t new to me, I knew that it had been played at the Moscow Interzonal years before (Sax - Beliavsky), but I had never thought of it as a serious try.

Capturing the a-pawn always looked decidedly anti-positional to me. I say that not with the benefit of hindsight - Karpov and everybody else would eventually give it up after he got battered by Kasparov in game 2 of the 1990 match - I never got it at the time. Successful tests against Ivanchuk (Linares 1989), Hjartarson (Candidates Match 1989) and Timman in the 1990 Candidates’ Final (game 1, game 5) or otherwise, I never understood the 15 ... bxa4 / 17 ... Ra6 plan and was never tempted to try it for myself.

As a by-the-by, I should mention that if you’ve been with us from the beginning you may just recall that this opening patterns crops up in a post (Susan Polgar’s Brilliant Brain) from July 2007. 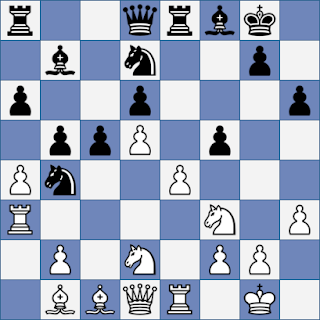 So back we went to the sharper plans with ... exd4 and a subsequent queenside expansion. Karpov never returned to 17 ... c5-c4, though. Instead he switched to 17 ... f7-f5, the move that White’s a-file Rook lift was supposed to discourage. 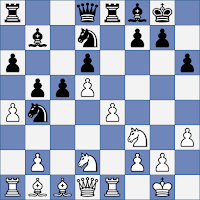 In one of the first games to reach this position (de Firimian - Beliavsky at the 1985 Tunis Interzonal - yes, that one), white had gone with the traditional Lopez manoeuvre Nbd2-f1 and Black had responded with ... f7-f5. The idea - to destroy White’s centre and free the bishop on b7 - is clear enough and the theoretical consensus was that Black has a comfortable game at the very least.


The point of Ra1-a3 was to exploit the loosening of Black’s king’s position that the pawn advance would leave behind. It also helps to keep the knight on d2 for a bit longer as it may be able to go directly to the centre should the e4-pawn be traded for the f-pawn.


Karpov first tried 17 ... f5 in game 9 of his Candidates’ Final match against Timman. He tried it again against Kasparov in their fifth match, Gazza responding with 18 exf5 in game 4 and game 22 and 18 Rae3 (as Timman had) in game 20. These were the last of the Kasparov-Karpov World Championship Zaitsev games, but there was one final hurrah - another 17 ... f5, 18 Rae3 encounter (at Amsterdam 1991) which ended in a draw.


AFTERS
The final score in the K-K Zaitsev mini-match was +4 =5 (6 if you included Amsterdam) -1. A fairly healthy score for White, to be honest, and it becomes absolutely pulverising when you recall that 2.5 of Karpov’s points came in the first two matches.

Not that Black’s conspicuous lack of success with the Zaitsev at the very highest level put off me or many others. Nigel Short relied on the system to win his St John Candidates’ match against Sax in 1988 for instance** and it cropped up a couple of times - game 2; game 10 - in the Short - Timman Candidates’ Final early in 1993. Either through respect for the positions he’d previously played with Black or simply a desire to surprise, Nige opted to avoid the mainlines with 12 Bc2 and an early d4-d5 in those games.


Kamsky played the Zaitsev throughout his PCA Candidates’ match with Anand in 1995. He punted a couple of sidelines, it’s true, but in game game 5 he went for 17 ... c4, 18 Nd4 Qf6, 19 N2f3 Nd3 which had been suggested as an option (by Kasparov, I think) immediately after Leningrad. Anand could find nothing better than to force a repetition very soon afterwards. Game 7 was a much longer draw in the 18 axb5 line.

Since Kamsky had tried 9 ... Bb7 against the future world champion in another match the year before, Anand must have been very prepared for it. Quite how ready he was wouldn’t become clear for another 10 years though. At the San Luis World Championship match tournament in 2005, Adams walked into an exchange sacrifice that Anand had analysed with Yusupov prior to playing Kamsky.


Timman subsequently wrote in New in Chess that he had discovered 23 Qd2 when preparing for Karpov in 1990. I’ve also heard tell that Kasparov claimed to have found it in 1989 too. Odds on, Kamsky went 17 ... c4, 18 axb5 axb5, 19 Nd4 Ne5 rather than 19 ... Qb6 because he knew about it as well. Adams, who didn’t make a habit of playing the Zaitsev, was evidently on his own. A bit of bad luck for Mickey, that, but such is life when you play a sharp line at the top level. 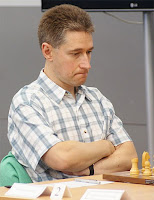 And that’s where we’ll leave it, I think. I gave up the Zaitsev a year or two before San Luis. I haven’t the foggiest what’s happened since then, although I’m fairly sure there haven’t been (m)any games at the highest levels.

If you know different - and have made it this far - do please feel free to let me know in the comments.

* It was actually 15 ... Rb8 in the game, Timman having previously thrown in one repetition with 11 Ng5 Rf8, 12 Nf3 Re8. This was a common tactic back in the day, White either trying to bluff Black out of his/her favourite defence or simply getting a couple of moves nearer to the time control.


** Sax-Short game 2 was one of my major inspirations to take up the system whilst game 4 - like game 3 of the Hjartarson - Karpov match the following year and a couple of games (1 and 3) from the ’85 Timman - Kasparov match - is an example of what happens when White opts for restraint with 12 a3 rather than try the more direct 12 a4. I was always going to go with Karpov’s 15 ... a5 rather than ... g6 as preferred by Gazza and Nosh.


Adams pic via Chessbase
Posted by Jonathan B at 8:00 am

In recent years, I have developed a different approach. The popularity of h3 and d3 anti-Marshalls means that Black is under no direct tactical threat. Therefore it can be up to Black to find the optimum squares for pieces and the most sensible regrouping. I think Black needs to be able to play .. g6 to keep the b1-d2-f1-g3 Knight out of f5, therefore h6 is possibly wrong so as to be able to play .. g6 without incurring weak g and h pawns.

There's a whole family of related systems going under the handles of Zaitsev, Breyer, Smyslov, Keres, Chigorin even and I think it better to study the underlying ideas in width rather than particular sharp variations in depth. GMs have gone off the ultra-sharp, not least because of the dangers of engine ambush which perhaps even 1990s theory demonstrated.

Indeed, Roger. Chess has changed and very forcing lines seem to be out of fashion at the top. Party because of engine ambush, and partly, perhaps, because they’ve now been analysed to a definitive result?

I’m sure you’re right about grasping underlying ideas and themes rather than studying specific variations. I’m quite sure that was also true in 1990 when I was playing the Zaitsev as well.

How do you feel about your point that despite knowing the theory to move 17, you never got to play it past move 12?

a) At amateur level, opening knowledge is not a priority as you'll probably win/lose the game due to a tactical or strategic error in the middle game, therefore it's better to concentrate on tactics or middle game understanding
b) Despite never getting to play all your lovely theory, it still stood you in good stead, as you instinctively knew where to put your pieces, what pawns to push, what plan to adopt etc.
c) The truth is probably somewhere between a and b.

How do you feel about your point that despite knowing the theory to move 17, you never got to play it past move 12?

THere’s also the broader point that if you only knew the moves ... Bb7 and ... Re8 you wouldn’t necessarily associate them with the plan of attacking e4 by giving up the centre with ... exd4. That would probably seem a risky thing to do if you didn’t know it had superGM backing. In all three of those all student games I played this plan and I got very good positions. I scored +1 =2 -0 against opposition that was 20-25 points above me in rating. And one of the draws I should have played on at the end as well.

I think it’s probably fair to say that knowing the theory helped me play those games to some extent. I wouldn’t go so far as to say (B) though.

All this reminds me that I didn’t ever answer your comment on last week’s post. I’ll do that now.