Once was enough VIII : Accelerated Dragon 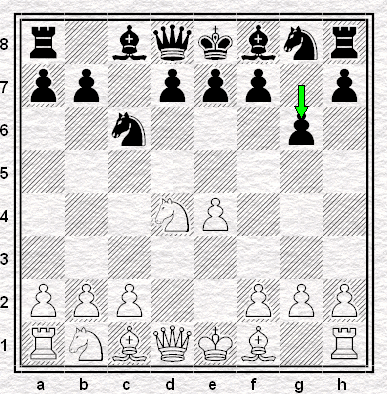 The Accelerated Dragon. Never remotely as popular as its allegedly slower cousin, but as far as I recall I've never played that version at all, almost the only major variation of the Sicilian that I haven't. When I started out playing competitive chess, lots of people (but probably above all, Miles and Mestel) were giving it a go, in English chess at any rate, but I took more notice of Fischer's annotations in 60 Memorable Games.


I once thumbed through several issues of "Shakhmatny Bulletin," when the Yugoslav Attack was making its debut, and found the ratio was something like nine wins out of ten in White's favor.

"Weak players even beat Grandmasters with it", says Fischer of the Yugoslav Attack. I suspect I'd lose to weak players with either side of it.

There's actually an Accelerated Dragon in the book too, though I never properly noticed that at the time: the second game in the Fischer-Reshevsky match, in which Fischer improved on Alekhine-Botvinnik from 1936. I wasn't paying attention: not only does the 1961 game open with our move order as above (rather than the 2...d6 of the normal Dragon) but Fischer's note to White's eighth specifically refers to


the point of Black's "accelerated fianchetto"

which is precisely to play, if possible, ...d5 in one go.

Why I played it at the time I did I haven't the faintest recollection: I see from my scorebooks that it comes after a whole mishmash of different stuff: a few open games preceded by a Caro-Kann, some French Defences and a number of Sicilians of which the only one to feature 3. d4 was a Sveshnikov. Something different every game, like the top players do - except without the ability, the preparation or the results.

Why I was attracted to it generally: that's simple enough. Simple is the word. It seemed to have a simple idea: 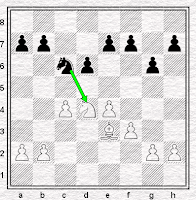 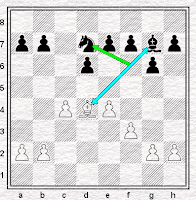 except one Black knight and White's white-squared bishop, which is therefore bad, so Black wins the ending. 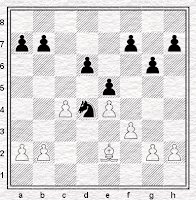 And that's all there is to it, as Bruce Forsyth used to put it. That, and the presence of various cheap traps involving ...Nxe4, like this one for instance. 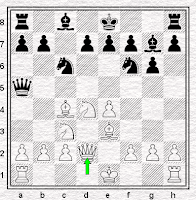 It's not "accelerated" at all. It offers a simple plan, cheap traps and above all the knowledge that it probably isn't really any good. What more could a club player want from a opening?

Foyle's. It was big and brightly-coloured. 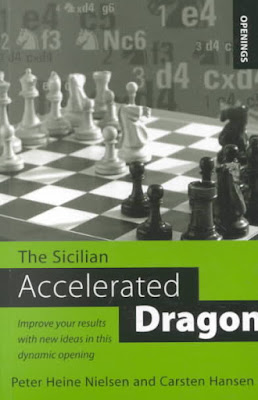 I like a nice chunky openings book: the garish colour is a bonus, as are illustrative games from Larsen such as this and this. The Accelerated Dragon, the preface tells us,


had lived a life of semi-obscurity for many years, when Bent Larsen revitalised the black side

and they also cite "Tiviakov, Anand, Alterman, Petursson, Andersson and Larsen" as proponents of the system, if system it can properly be called. They must have raised its profile more than I'd realised: not only did this book come out in 1998 but, looking at the other two books I acquired on the opening, one by Jeremy Silman and John Donaldson (Cadogan) 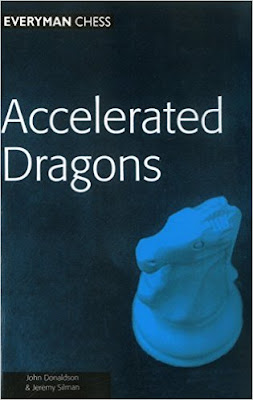 and one by Silman on his own (Chess Digest) 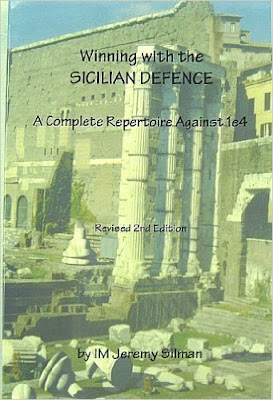 both those came out in that same year. All the more strange, then, you might think, that it should take me another five years to get round to giving it a go: almost as strange as buying three books on an opening that I ended up playing only once. (Imagine the state of your library if you adopted that pattern as a rule.)

Not that strange, though, when I reflect that I've also got three books on the Leningrad Dutch, which I've never played at all. Never even really considered it.

The next game in my scorebook has me starting 1. e4 c5 2. Nf3 Nc6 but then 3. d3, so I'm guessing I was perfectly happy to give it another shot. But on the other hand I can't have been that keen, since in fact, to date, the game is the last Open Sicilian I've ever played: a few months later I gave up playing the Sicilian.

You're thinking, the game wasn't as bad as all that. Indeed it wasn't. But something had to go and the Sicilian was it.

It's an academic question as long as I keep up my no-Sicilians rule. even if I didn't, you often find, at club level, that whatever Sicilian you decide on, you're lucky if anybody ever lets you play it: it's all sidelines and deviations, and I'm a bit out of touch on what to do about them nowadays, what with not playing the Sicilian and all. And what do people play against 3. Bb5 these days?

But I can't say I'm not tempted. Probably not tempted enough, but tempted all the same. You've got cheap tricks and a simple plan. And if it probably isn't really any good, well, which of us really are?

Anyone defending the English with .. c5 and .. g6 may have to know some Accelerated Dragon theory in the Maroczy Bind variations at least.

The move order with 2. .. g6 avoids the 3 Bb5 systems at the cost of a very early disclosure of your intent to play some form of Dragon.

Interesting series this one. Being pedantic, after your cheapo 1. ... Nxe4, doesn't 2. Nxc6 stop you getting your piece back?