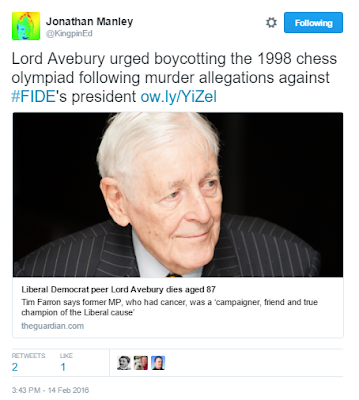 I think I missed that at the time, or I'd forgotten about it since, but I had a look around and as per usual, having gone searching for something on the internet I found myself looking at something else, specifically a statement by Baroness Symons to the House of Lords in June 1999 concerning the conflict in Kosovo (and subsequent questions). My search caught it becase Lord Avebury contributed, but it was someone else who raised the question of chess.

Our man in the ermine on this occasion was Baron Marlesford, of Eton and the Coldstream Guards, who offered the House a surprising, if unoriginal, chess-centred perspective on Russian troop movements in the conflict. 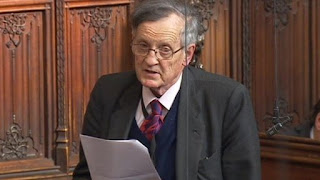 What the hell Liz Symons was supposed to reply to that I don't know (I'd have gone for either "yes, we're shipping over two dozen of them on the next transport" or "haven't you been abolished yet?") but you can almost hear the "oh, Christ" at the start of her reply.

But wait! There was more, this time from Baron Ponsonby of Shulbrede on the Labour benches. The nobel Lord had an extremely important point to make.

Yes, yes I know all about Bletchley Park but does anybody think this was anything other than the tedious old tradition of invoking chess whenever Russia and international relations are the subject of discussion? Or, for that matter, the tedious old tradition of self-important old drones thinking that invoking chess makes them look clever and knowledgeable when in fact it has the opposite effect?

Purdy reminds us that from the point of view of chess, chess-and-war metaphors don't really work


almost the whole basis of chess is the rule that each player must move in turn and only one thing at a time. This makes it entirely different from war

but the more important truth is that they don't do anything for our understanding of war either: all they do is trivialise. Barrel bombs aren't chess and they aren't anything that can properly be compared to chess. I really wouldn't mind if we just dispensed with the chess-and-war metaphors altogether.

I note from his Wiki page that Lubbock/Avebury's first wife was Belgian and had the maiden surname "O'Kelly de Gallagh".

Despite the slightly different spelling, any relation?

Totally with you on the chess-and-war thing.

However, I came here to say that Lord Avebury was a great man. If there was a politician in our time who fought more bravely for the disadvantaged of all kinds, I didn't notice him or her.

I met him in a park in Camberwell in the mid-eighties with his eighteen-month-old son, who as far as I could tell only knew two sentences. One, taught to him by his mother, was 'Mind de dog turds' (it being that kind of park). The other, taught to him by his father, was, 'Tebbit is a turd'.