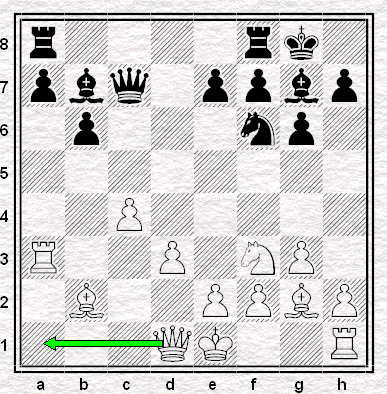 I've gone over this ground before, when we were looking at Nimzowitsch's Nh1, which I notice now was also played against Rubinstein. Ray's remark in Nimzowitsch: A Reappraisal makes sense here too:

or at least, when I had a long period playing the Reti Opening in the nineties I was always particularly keen to get the queen to a1, behind the bishop on b2.

Easier said than done, since you have to get round the queenside rook, but Reti himself managed it again the following year against Yates 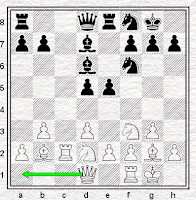 which may go some way to explain Kmoch's comment, quoted by Fine (in The World's Great Chess Games) when annotating the Rubinstein game:

Golombek, annotating the same encounter in his collection of Reti's best games 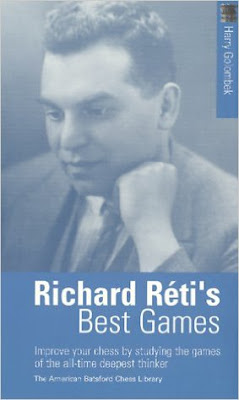 describes the queen move as

and in Flank Openings Ray gives 15. Qa1 an exclamation mark, as it merits.

In the Times (paywall) for 27 August 2011 he was more forthcoming, if slightly more careless:

Strong and typical, but perhaps a little obvious, today: I'm sure most readers would play it almost without thinking. But it still has the same, simple, geometric beauty, in the combination of rank and diagonal,as it must have had in 1923, or as it had when I first saw it, half a century later. One should not confuse what is complex with what is attractive. Not in art, not in music, not even in chess.

I'm less convinced by Qa1 or Qa8 in the reverse positions. I would now only be inclined to play it when I have too, because the Queen needed to get out of the way. The problem is that if the game opens up a bit and the minor pieces are exchanged, you need the powerful Queen creating threats, not hiding on Rook One. There was a famous game where Reti played Qa1 and then followed it up with Qh1 the next move. Both were with threat though.

It is a problem to be solved when playing the Reti or for that matter defending as Black against London and Torre systems. Assuming no tactical action, you've played in no particular order Nf3, g3, Bg2, O-O, d3, c4, b3, Bb2, Nbd2. The minor pieces are where you want them with little scope for regrouping, so where do you put the Rooks and Queen?

There's also a queen into the corner, behind a bishop, in the Hedgehog defence. Don't think it's as elegant (in arrival and effect) as Reti's version.

That Qa1-h1 game referred to was against Em Lasker.

I was always rather fond of the ... Qa8 that sometimes crops up in the QGD