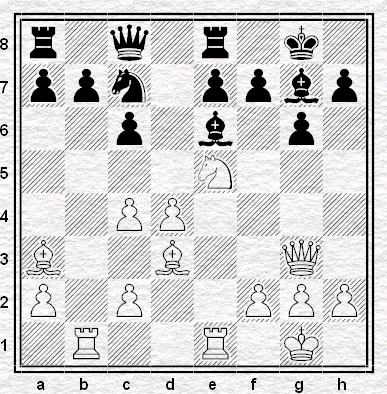 Chessabit are a new London outfit, who are about to run their second one-day rapid-play tournament. The event is this Saturday - December 2nd 2006 - in East London. First prize is £500, no less - and best of all, it's not to late to enter. Click the link above for more details.

I took part in their first event over the summer, and I was lucky enough to scrape my way to second place and a prize of £250 - plus a few goodies thrown in from their sponsor. It was a nicely organised event in a novel setting (that time, the Salvador & Amanda bar/club/restaurant in central London.) I'm sure they will have learnt a lot from it too - especially how to deal with cantankerous old timers - and so this next event promises to be even better.

The diagram position is taken from one of my wins that day, and should tell you something about the standard of play required in this kind of tournament. That is, the standard required when the time-limit is all your moves in fifteen minutes, and the grading limit is 175ECF and under. 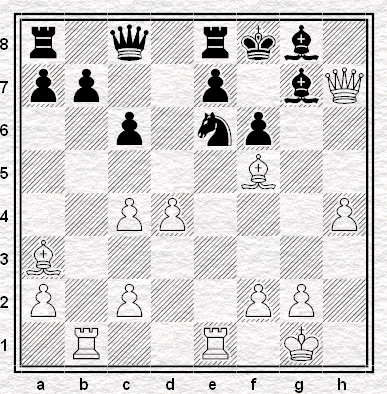 Great website Tom,very professional- I hope to contribute some stuff which will make it more amateurish:)Under 175? Yet more rapidplay "gradism". No worries as off to darkest Royston for the Herts Congress (normally at Hitchin). Happy cheeseing (not a typo) on Saturday btw!

Streatham Hornet, I wonder who that could be! Watford are the Hornets right? So either Antony or Andrew . . . And wait a minute. I remember a certain Hedgehog where a certain >175ECF someone went into 'cheese mode' after dropping a piece . . .

Glad you like the website anyhow. It's not just me though - Jonathan wrote the article below this one for isntance, about World Championship blunders...

Good look in the Congress - if you're playing on Thursday I'll see you then before the weekend.

Well guessed, Tom! Blog is very interesting - so I decided to get myself a Blogger name as opposed to anonymous when posting.

Andrew - I may enter 'Hitchin' as well, not sure yet. Royston's the furthest north yet (although not too bad from the house in Norfolk!)

Why bigcat Antony - and what is it about Watford players and cats?!