Today would have been Capablanca's birthday, had he lived to 118. He was the third World Chess Champion, and one of the all time greats. Current World Champion Vladimir Kramnik describes him this way:

We can compare Capablanca with Mozart, whose charming music appeared to have been a smooth flow. I get the impression that Capablanca did not even know why he preferred this or that move, he just moved the pieces with his hand. If he had worked a lot on chess, he might have played worse because he would have started to try to comprehend things. But Capablanca did not have to comprehend anything, he just had to move the pieces!

Well, at least I have a lack of comprehension in common with Capablanca. Anyhow, wikipedia has a brief article about him here, whilst below is a short and spectacular crowd-pleasing win of his, against the amateur Jaime Baca Arus in an Exhibition Match in Havana, 1912. Capablanca played white. See if you can spot the continuation from the diagram position.

I should let you know at this point that Capablanca was playing blindfolded. 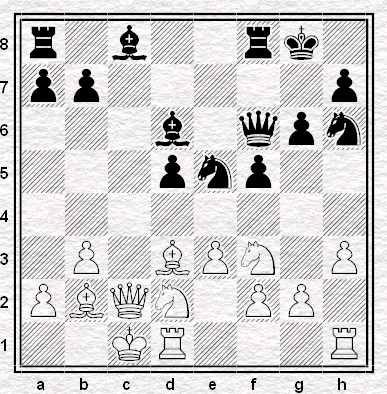 But can you see his next move?

Well, here is how the game finished: