It’s humankind against the computers and frankly we’ve embarrassed ourselves. [see Shock and Stun below]. There goes Kramnik, allegedly the very best we’ve got to offer, making the sort of howler that would shame a patzer who spends his time fiddling around the lower reaches of the London League. A player such as myself I mean.

Perhaps we shouldn’t be too surprised. After all Kramnik’s recent match against Topalov was settled by a rank bad move. We probably should have seen that coming too.

Looking back at World Championship matches, you'll find both Champions and Challengers committing blunders of true beginner-level brilliancy. Yes, from Steinitz-Zukertort all the way to Kramnik-Topalov, it seems the greats not only outshine us amateurs in matters of conventional chess technique, but that they also horlicks things up with a lot more style too.

This is definitely an area that warrants further investigation but before we start our quest to find the greatest World Championship Blunder of all time we need some objective criteria by which we can judge the contenders. After long contemplation (while I was on the bus on my way to Golden Lane last week) using the latest technology (back of envelope, biro) I’ve discovered each blunder can be definitively rated using four criteria.

The first two categories probably speak for themselves. A move that turns a certain win into a dead loss during a closely fought match should clearly score more highly than one that merely transforms an easy draw into a slightly worse game when the match situation is already beyond saving. The other categories, though, may need more explanation.

My robust and absolutely non-subjective (ahem) yardstick for *Degree of Difficulty* is how I'd feel if I played the move myself during a routine London League match.

*Artistic Merit*, on the other hand, is a collection of sundry factors that the truly gifted will throw into the mix to lift his work above the mediocre. It’s a dollop of cream that might (slightly) disguise the stench of rotting strawberries if you will.

It’s a concept, I must confess, I struggled to explain to Tom when we discussed the potential for this series. Some potential examples are the blunder requires a Queen sacrifice to exploit or perhaps the move itself was so wonderfully pointless it’s really difficult to work out why it was played even if it didn’t lose instantly. That sort of thing.

So let's review Kramnik - Topalov in the light of our criteria..... 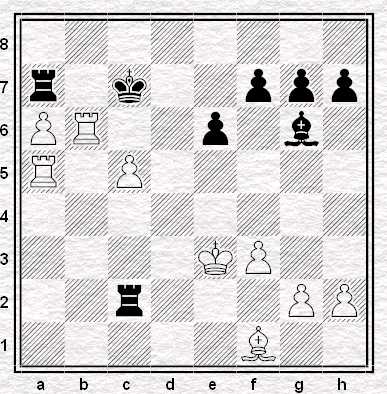 
Topalov was losing anyway in a blitz finish you never can be quite sure so you have to say blowing the game instantly had a fairly significant effect on the game. Similarly it was effectively a world championship decider so losing the game meant automatically losing the match.

Of course it was just a rank bad move and thus fairly hard to find in normal play. I'm not sure what I would have played in the position myself, perhaps trying to get the Bishop around to have some influence on the Queenside, but I'd certainly be kicking myself after the game if I'd come up with ... Rc5.

In terms of Artistic Merit there really isn't much to say. A simple one move refutation and that's your lot. I do find it somewhat amusing that Topalov should lose the match in this way, given his (some would say) questionable behaviour earlier in the contest. There's nothing too memorable about this blunder though, more's the pity.

So there you have it. Topalov manages an Ultimate Blunder Rating of just 8/20. It's respectable, but not really good enough at this level.

Trust me, there are much better of examples of ineptitude to be found in World Championship matches across the years - something I hope to demonstrate in the weeks and months to come.

Next time ... probably the most famous World Championship blunder of them all.

I look forward to the next installment!

I think I would rate the Kramnik-Topalov blunder differently though.

*Effect on the Game* 2.5/5 (since it was balanced between draw and loss)

*Effect on the Match* 4/5 (since a draw and the contest would have continued, but Kramnik I think would still have been favourite)

*Degree of Difficulty* 1/5 (since his radar for traps should have been fully turned to on, and a second's reflection would have registered the problem with the move)

*Artistic Merit* 0/5 (it was just a nasty pawn grab with an obvious refutation.)

a late edit of the text removed a few comments I was going to make about the effect of Topalov's blunder on the result of the match.

In short I argued that even if he by some miracle turned the game around he would still be on shaky ground if he were to claim the world championship title. I expected a legal challenge from Kramnik to follow.

Anyway, we don't need to bother about all that now thank goodness.

I've also just realised my edit removed my thanks to you Tom for assistance in preparation of the article.

Yes in the eyes of many Topalov would have been a 'paper champion' even if he won.