New In Chess frequently send me adverts for products I can't afford, but this morning's credit-card temptation took me by surprise. "Botvinnik's Secret Games is about the training matches which the Patriarch played to prepare for his World Championship contests," writes Allard Hoogland. "It contains no less than 97 games from between 1937 and 1970, many of which are annotated by Timman."

Can't you just print that for free from the internet, though, a corner of my memory asked . . . ? 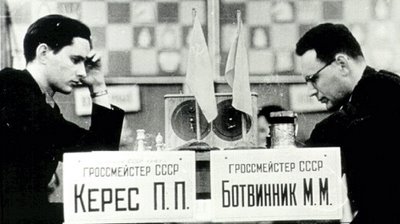 A previous version of the book is currently still available here (large pdf), titled this time as Secret Matches: The Unknown Training Games of Mikhail Botvinnik. It's edited by Hanon W. Russell - but with many games annotated by Timman, and with a very interesting essay by him too at the start, about the theoretical importance of the games. But on the other hand, this seems to be a new addition to the commercial version of the book:

The book also has an amazing chapter by Yuri Averbakh, one of Botvinnik's training opponents. Averbakh relates how he had to play in front of a blaring radio because Botvinnik wanted to steel his nerves against noisy disturbances. "After five hours of play", writes Averbakh, "I felt like an utter zombie."

I always feel like an utter zombie after five hours of play, but team-mates from our club will know that already. Anyway - if I were you, Streatham & Brixton Chess Club, I'd download the free version now, in case it disappears like a secret.
Posted by Tom Chivers at 11:42 am

I like NIC's latest email in which they say "the diagrams are crap, but we didn't print them, so buy this book anyway".

Yes that bit of their email struck me as a really odd marketting ploy.

I figure the logic is: "even though it's not printed well or one of ours - it's worth buying nonetheless!" (To disguise the logic of the advert which might well in truth be: "our editor wrote this, we have to advertise it, even though it's mostly freely available by the web anyhow", perhaps?!)

If you wade through this article:

there is some interesting stuff about the publisher of the book.

Essentially it's published by a new Ray Keene outfit called Hardinge Simpole which operates a 'print on demand' service.

In the mean-time, chesscafe who offer the free version, are apparently very much anti Hardinge Simpole and USCF in fact boycott them completely.