This is Adam W's adjournment position from the Streatham & Brixton Chess Club First Team match against Ilford (which was left 5-3 with four adjournments on the night). His opponent, who had the black pieces, sealed, and below the diagram you can find out  what happened on the resumption. 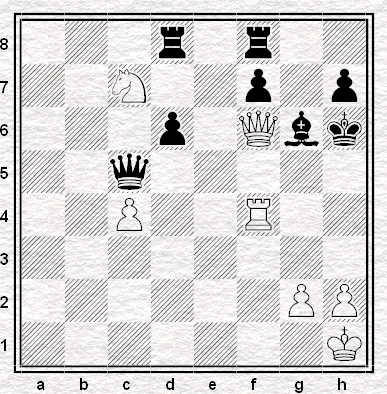 Jeremy meanwhile agreed his adjourned rook and pawn endgame as drawn - which brings the match score to 5½-4½ in Ilford's favour. Good luck to Angus and Alan in their adjournments - the results of which will decide the match, one way or another . . .
Posted by Tom Chivers at 2:56 pm

Spot on, Tom! My opponent was very gracious afterwards but I think a week later when we resumed he had still not got over his blunder at the time control (36. ...Kh6 allowing 37. Rf4 winning the Queen). I think if he had managed to sac a Rook for my Knight and then set up a blocade with his Rook on c8 and Bishop on the h3 to c8 diagonal I would have found this difficult to win.

Yes a blockade should have been his main aim. It would have been complicated by the shattered kingside pawns though - maybe if you could tie his pieces down to defending against the c-pawn in that kind of variation, you could have won his h-pawn using your king and queen.

Tough cookie to crack though - I'm not sure what the 'truth' of the situation is. . .

A further update: my opponent has resigned. I believe that makes the score 5.5 - 5.5 with Alan's game remaining...