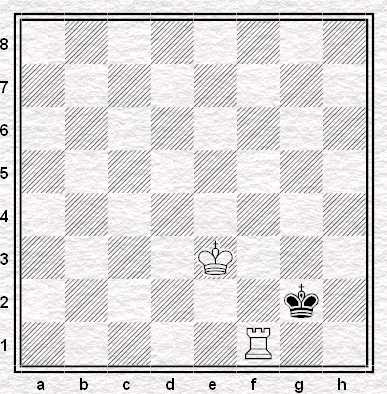 Last Tuesday evening we took on Redhill at home in the Surrey League. We ended the evening winning a tight match 4.5 - 3.5, although that’s no particular thanks to me since I only managed a draw.

My own result shouldn’t have been surprising. It's now three months, and fourteen attempts, since I last notched up a full point. At the head of today's column is the final position of my most recent - and that's using 'recent' in a very loose sense - win. I just wanted to remind myself there was a day when I actually could beat other people at chess.
Is this run of form a club record? It’s certainly a personal worst.

Something, clearly, is not right with my chess just now. I don't care to entertain the obvious explanation that,
(a) lack of success breeds lack of confidence which in turn leads to lack of success and a downward spiral;
or
(b) I'm just a bit rubbish at chess;
so it's time to come up with a conspiracy theory.
Every Saturday the Guardian runs a column called ‘Bad Science’. This week, Ben Goldacre wrote about randomness and how bad human beings are at identifying it.

“We have an innate human ability to make something out of nothing. We see shapes in the clouds and a man in the moon; gamblers are convinced that they have "runs of luck" … Our ability to spot patterns is what allows us to make sense of the world but sometimes, in our eagerness, we can mistakenly spot patterns where none exist.”


I wonder what Mr. Goldacre would say about the pattern on my Wins Draws and Losses this season:-

At this point the club moved from the old venue at the Priory Arms to our new home at the tennis club.

Clearly somebody at the new venue is out to get me. The questions that remain:-
The truth is out there.
Posted by Jonathan B at 10:34 am

I study my results according to varying criteria too, but using grading performance more than W:1/2:L sequences (since 1:1:0 can be worse than .5:.5:0 depending on opponents grades, etc.) There are certain clear results that come about for me from this, it's true. And it could well be that the change of home venue has 'spooked' you in some way that will fade soon enough.

However! Based on our two postmortems and blitz games on Tuesdays, I have quite a strong chessy opinion on where you are going wrong at the board. Do you want to hear it? It's no conspiracy...

The problem is obviously secretly placed mind-control ray generators at the new venue. You're a test subject...HM's Govt. has been working on this for over 20 years at the secret facility at...dammit, I had found it all on a website but now it's gone. More PROOF of the conspiracy!

Has Ben Goldacre tried arguing the point with Jim Plaskett?

TOM:
go for it. I'd rather hear the truth than not.

Ok, I think you over-rate your opponent's attacks and threats, and in response to them possibly panic a bit - or at least decide too quickly to 'change something' in reply.

For instance, I felt that in response to your opponent's Nc5, you rushed the decision to play ..Bxc5 - which is a huge structural concession for the sake of removing one active piece. Or during our Najdorf game where you had an attack - you started blundering your own material in a way you hadn't in any of the other games: perhaps because you knew you were attacking, you over-rated your own chances? Or during that first French game, where I sacrificed a piece to play f5-f6, ..g7-g5 looked very panicy in reply; I think the calm and more logical ..g7-g6 would have been safer, although perhaps you were still winning after both (I realise time was a key factor here too.) Or during the postmortem of my game, you seemed to think if white tried a standard King's Indian Attack in the final position (f4-f5, g4-g5, etc) he would have good attacking chances - you actually suggested a potential mate from it - and didn't seem to quite believe me when I said he wouldn't, because he didn't have enough material left.

All these moments to me from one night add up to a pattern . . . So you think I am right? If so, I wonder why this might be?

It might be because you don't have a very attack-orientated repertoire, playing the Reti with white and French with black - so when attacks do come along, you find it harder to evaluate them? It might be because (guessing) you were on the receiving end of a particularly vicious attack, and haven't quite 'recovered'? But I am getting ahead of myself - I could easily be wrong, maybe you had an 'off night' in these ways, or something . . .

Also see last year's adjournment agreed drawn in a position where I thought you were likely winning!

Swift reply because I'm at work:-

actually the core of what you're saying is incredibly accurate. I'm suprised how much of that came out from a couple of blitz games and some analysis.

I'll respond in more depth later but thanks for your feedback.

I don't remember that game specifically but it sounds like the sort of thing I'd do.

Now I feel clever :) But the bad news is, I don't know the remedy. Still - I look forward to a longer reply from ya.

Whatever you do, do not try to address the problem by changing your opening repetoire.

As a fan of your blog, I hesitate to suggest this: but does your decline in play somehow coincide with your increase in writing online?
:-)

You know if that's a general pattern Michael, the Knights Errant are in big trouble.

*WARHEIT*
I shall insist on an x-ray of all the light fittings next time I visit the club.

*MICHAEL*
I suspect there might be a correlation there but possibly not a causal one. I'll have a look at my post count over the weekend.

Glad to hear your a fan of the blog.