It started with a few fluttering glances. Soon I was naïvely making moves. They all went wrong at first - but such was my selfless infatuation, even the correction of my humiliation proved a form of delight. Slowly, things started to make sense. My eyes had been dazzled by a golden glowing glitter: yet, I soon realised they had barely opened. As they slowly widened, painfully at first, then wilfully, I perceived a rich, broad, landscape, so strange and new, dotted with all manner of once-impossible creatures and rare gems. The most magnificent, mountainous peaks were - I sensed - shrouded in mist, and miles beyond the rolling horizon that even a lowly creature, such as I, could perceive remotely. 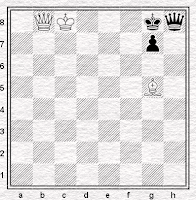 But even so - I began to put a foot right, tentatively, here and there.

And so, I'm in love. With, the world of . . . chess studies. And this is no ordinary love, since unlike with pasties and beer, I'm willing to share too. Which brings me to the diagram: a fairly elementary study to understand (by F. Richter, Suomen Shakki, 1953) where it's white to play and win. You can click it to embiggen if you like, but be warned. If you get it right, you're likely to hurdle over your monitor in pure joy, yodelling the lyrics of The Beatles' happiest song; Here Comes The Sun!

PS. Like most good, natural forms of love, you can even get paid for it.
Posted by Tom Chivers at 11:42 am

I confess I had to resort to the computer after an hour or so wandering up various garden paths. It's good, isn't it? But studies are good, and I never solve them.

I hate it when you use phrases like, "a fairly elementary study". I already expect not to be able to solve it and now I'm just going to be totally humiliated as well.

Having found out Justin couldn't get it after an hour's thought I'm not sure I'm going to even bother trying.

Elementary only to understand.

However, it is far, far more rewarding with studies if you attempt and fail, rather than just find out the answer directly. I'm not sure why this is - just is that way, for me . . .

You should really get a set out to try and solve them, too. Had I done that rather than just looking at the diagram I might have understood that some of the moves I was considering had effects other than the ones I immediately saw.

despite my best efforts I've been seduced into having a go anyway.

Based on my initial analysis (i've only looked at the diagram on screen and I'm about to take up Justin's suggestion) I seem to have made a bit of progress but I smell a false dawn. No doubt inevitable failure will follow... but perhaps it's better to have loved and lost?

Let me know if you want a clue. (Although I am bad at clues.)

I didn't find the solution by myself. In fact I got everything but the first move. No really.

Like I said in the Sherlock Holmes chess puzzle - it's all about asking the right questions.

At the end of the main line (with my King on the wrong square but everything else in place) I was thinking 'how can I force a win from here?' when the question should have been 'how I can I stop Black doing what he just did?'.

The love theme is apposite as the kings and queens get close and personal.

Sounds like you needed to "keep the idea, change the move" Jonathan. I've shown this to a few strongish players in pubs before, btw, and they've not gotten remotely close.

Martin ~ well, I will try not to get too seedy, but to take your point further: there is one very lucky King, one very lonely one :)