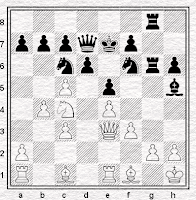 When you sit down for your game, and then spot that the opposing team has a Grandmaster playing on board three - you know already you're in for a night of tough chess.

And so it proved for Streatham & Brixton's First Team in the match against Cavendish I, in London League Division One on Thursday, that ended 3-9. But one of our three points was, at least, both a major upset and magnificent game. On board 5, Robin Haldane beat Matthew Piper (2290 Elo/193 ECF) with the black pieces and in a sumptuous sacrificial style. The fireworks started to go bang in the diagram position, and you can play through the whole game below the rest of this update.

Meanwhile on Tuesday, our Second Team in the Croydon League scored a thumping 3½-½ win against South Norwood. They now lead Division 2 - and could win it tonight by beating Crystal Palace 2. Good luck chaps.

After two defeats on the trot, our second team in the London League have also recovered a bit out of their bounce, by beating Beckenham & Charlton 6½-3½. And they also currently lead Hackney 2 by 4½ to 2½, with three games adjourned from that one.

Finally, the Stoneleigh Trophy has concluded this year. In our last game of the season we beat Wallington & Carshalton 4½-3½ to give us a chance of victory. But alas for us, Surbiton drew their final match, to edge ahead of us on game points and clinch the title. Congratulations to them, of course. Now here's what you've been waiting for.

I was wondering how Robin managed to get a complete hack out of the Black side of an Italian Opening.

I think it's hard to get over exactly how much psychologial damage I underwent as a result of playing on the next board to Robin for several years and having to work out how he was going to get away with it ever time.

Matter of fact it's why I emigrated.

That was an amazingly gutsy game by Piper -- and probably a model for how to play against a higher rated player. If you are likely to lose anyway, you might as well have fun, and you never know....

I reckon we should get some money together - say £5 from each of us - and offer Robin a wodge of cash on condition that for a season he only plays openings that involve playing both bishops on Knight 2 at an early stage.

Of some sort of sponsored early queen exchange - the sooner they're off, the more money we give to the charity of his choice.

Incidentally I don't think I've ever seen Robin lose to a higer-graded player. Or beat a lower-graded one.

Wow, that's a hell of a game! If I ever play a game like that myself I will die a happy man. :)

*michael* - the winner was Robin Haldane, the loser Piper! And Robin attacks pretty much every game, irrespective of opponent :)

As Tal apparently used to respond:

@ anonymous: some compensation? LOL! That endgame is totally won for black, much like the one reached in the game; he's picking up a pawn on c3 too, incidentally.

I briefly put the game through my computer before the game, btw. It thinks with best play, white can draw - although I didn't analyze it thoroughly.

I'm intrigued as to why this game has attracted two failed and anonymous attempts at refutation . . . ?

Good to see my old bridge partner Matthew Piper still active in the london chess scene. I think ten years ago, he would have put up even more resistance. These days he has got other things on his mind ...