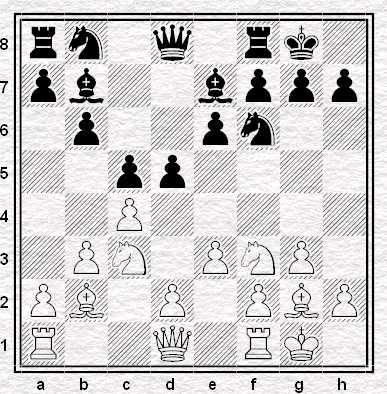 For a while now, I’ve been highly suspicious about the usefulness of chess books for the average club player (i.e. me) – and that goes double for books on openings.

The position above can be reached by any number of move orders. I usually get there by something like

Davies’ main line here is 9. … Nc6 and after 10. cxd5 Nxd5, 11. Nxd5 Qxd5 White can get some initiative based around the exposed position of Black’s Queen. If Black takes back on d5 with the pawn (with or without an exchange of Knights) White can play d2-d4 when Black will end up with hanging pawns on c5 and d5 or an isolated pawn on d5.

To avoid this Davies considers 9. … dxc4, 10. bxc4 Nc6 which avoids the weaknesses at the cost of allowing White a central pawn majority. He also allocates a brief note to 9. … d4?! which is less good than making the pawn advance without fianchettoing the Queen’s Bishop.

All well and good but my first thought when looking at this line was, “what about 9. … Nbd7”. Black develops the Knight without blocking the long diagonal and so can always recapture on d5 with the Bishop. This seems like a very sensible way to play to me but Davies doesn’t mention it at all. 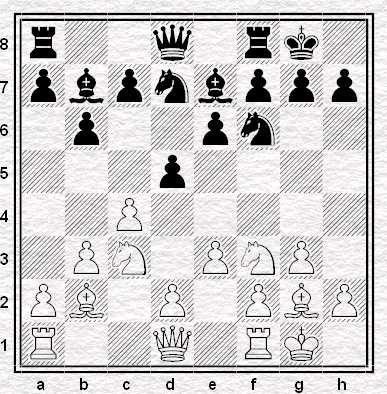 This position is very similar to the first. The only difference here is that Black has played … Nbd7 but omitted … c5. This is also a common line in the Reti and in fact was reached in the famous game 24 of the Kasparov – Karpov Seville world championship match.


Evidently I’m not the only one that thinks combining … Nbd7 with … c5 is a good idea. Over the last year I’ve faced that variation four times during Internet and Club games – but not once has anyone played the lines that Davies suggests.


Ray Keene’s Flank Openings is not much better. He also gives more attention to other lines but does at least give snippets of two games in this troublesome (for me at least) line.

Going back to the first diagram Keene quotes Polugaevsky – Petrosian, USSR 1970 as continuing,

Keene suggests 13. Nb5 leads to equality and also mentions 10. d4!? though without additional comment. He then gives Bobotsov – Najdorf, Siegen Olympiad 1970 as,

and again Black won on move 36. Keene suggests 14. cxd5 instead but doesn’t give any further analysis or assess the position.

Black seems to be doing fine when he mixes … c5 and … Nbd7 together. To my eyes it seems a much more obvious way to play than blocking the long diagonal with … Nc6. In any event, the players I come up against – typically within the range 120-150 BCF although sometimes a little more or a little less – favour this set up over any other.

So why does Davies ignore it entirely why Keene only gives it a cursory glance?

Oh and one more question, what’s a good plan against it?
Posted by Jonathan B at 9:46 am

Some initial thoughts: Nd7 reduces the Black queen's inluence on the d file and her defence of d5. Also, if Nf3 moves then the d5 pawn is pinned since Bb7 is unprotected. So maybe Nf3-g5-h3-f4 putting pressure on d5 is an idea (though it is a time-consuming manouevre at this stage of the game). After Ng5, f4 possibly followed by f5 may also be worth considering... Nd7 somehow doesn't feel right; maybe it gets in the way and discoordinates... Probably the above is nonsense but that's what I think after a few minute's thought.

I browsed through a copy of Nunn's Chess Openings in Foyles yesterday.

I forget the precise line it suggested but it did involve White playing for f4 - although after Nh4 Bxg2/Nxg2. According to NCO ... Nbd7 after ... c5 leads to a small advantage for White.

I still think it was worth a mention in a specialist book on the Reti though.

Unfortunately most of my Reti books are out of reach at the moment (i.e. in a friend's house a few kilometres away) so I can't really go into this. Ironically I do have the Davies book to hand. I've played this line quite a few times over the years, though not recently.

Interesting that JB should post on this, though, as I shall be investigating another Everyman book for this blog very shortly....

That said, though I'm out of practice in the nuances of this line - if 10.cd5 is a good idea after 9...Nc6 I'd have thought it even better after 9..Nbd7. Black doesn't have the queen capture on move 11 so can either take with the bishop (when it's somewhat misplaced) or with the pawn (in which case 12.d4 and there's going to be either an isolated pawn or hanging pawens on the Black side).

Thanks for your comments Justin.

I agree with you about the isolated pawn situation should Black recapture with a pawn. This, in fact, is exactly what happened in my recent game in this line. I thought the hanging pawns gave me a slight edge - though that didn't prevent me from messing things up almost immediately afterwards.

I'm curious about your 'misplaced Bishop' comment though. To me eyes the Bishop might be a bit exposed on d5 but it seems the open diagonal must be a help to Black.

I'm not saying I'm right about that of course and I dare say that White can head for an edge by offering a trade of light-squared Bishops - something I'm all too often reluctant to consider. Perhaps I need to remember the Bishop on g2 is not a 'must have' for White.

Still, after saying all that, I definitely feel the absence of discussion of this line in Davies' book is at best curious and at worst a significant drawback.

Well, it's worth bearing in mind that with flank openings there is usually much less forcing play and therefore more potential moves are available much of the time.

If you wanted to ask difficult questions about Davies' book you could try wondering whether anybody really believes in 3.e4 after 2...dc4, or whether 5.Qc2 is doing the job against 4...dc4 in the ...e6 lines. (I have a feeling that 5....Qd5 is proving hard to meet at the moment.)

It's not a terribly good book, but perhaps it's hampered by the fact that on the current theory Black is reasonably comfortable in most lines after 1.Nf3 d5 2.c4.

Funnily enough I was planning to ask exactly those questions in later articles.

2. ... dxc4 3. e4 just doesn't look right to me and I've never seriously considered it. I'm not sure Davies believes in it either - it's the only chapter in which he offers an alternative to his repertoire suggestion.

Fritz 8 plays 5. ... Qd5 against me all the time and I've yet to find anything convincing against it. For that reason I've started to play an early b3 - just as Kasparov did against Karpov in Seville (24). Not that you'd know it from Davies' book because he standardises all the openings and avoids any discussion about the implications of different move orders.

Incidentally, I misread your comment at first and thought you were suggesting White may be struggling after Qc2 and ... Qd5 in the lines that arise from

I'm not at all convinced by Davies' analysis in this chapter either. Again, I'm not planning to head into this line anytime soon - I'm going back to the older lines with 3. b3

I can't say the book hasn't been helpful to me but it's nowhere near as good as it could or should have been.

BTW: I suspect you're right about the objective evaluation of the position after 1. Nf3 d5, 2. c4

Theoertical equality doesn't bother me as long as there's plenty of play left on the board.

Thanks for that Martin that's very useful.

You can avoid the possibility of line (b) by playing d3 instead of Qe2 but I'm not sure it's worth it as I think it's quite good to allow it.

Thanks again. If nothing else you've confirmed my suspicion that this is a line that *should* have been considered by Davies.

Is that because there's so little theory on that line?

I think I would pan it just for the title itself.

The London System - Be the life and soul of the tournament with
this electric super-duper opening. Dazzle your friends with
one tactical masterpiece after another.

Having had a wee joke or three I must say the fault lay with
the blogger who bought the book and then knocked it.

What do you expect when buy you an opening book - any opening book.
Instant answers as to why you are not a good chess player?

Opening books con you into thinking,
you are the one,
that can win what's never been won,
that can do what never been done...

Meanwhile you have fallen for another cheapo.

Burn your opening books. Turn off your computers,
get out there and play some bloody chess!