Chess is not draughts

"I used to play checkers with her all the time."

"You used to play what with her all the time?"

- JD Salinger, The Catcher In The Rye

I was reading through yet another book - my sixth, I think - on the Semi-Slav, Reinaldo Vera's Chess Explained volume on the Meran. I could hardly help noticing the following sequence, occurring in his illustrative game Krasenkow-Erenburg (Vlissengen 2006) and sundry others. The opening moves, which can be played in a variety of orders, go like this

leading to the following position: 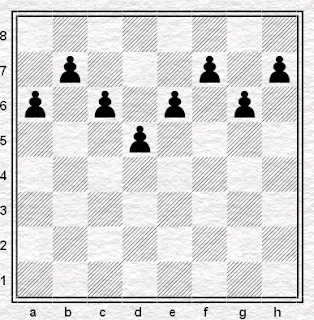 Why, I wonder, do people do this? Why do they deliberately put all their pawns on squares of the same colours? Is it because they can? Is it because they think they're good enough to get away with it? If they're going to do it, why not do it in four moves instead of taking seven? What, indeed, is the quickest time any professional player has taken to get all his or her pawns on the same colour?

I dunno. Maybe they just like the way they look.

I more or less once did this in a match at Drunken Knights. The lighting was so poor, it was the only way I could see what was happening!
Andrew

Was that in your Stonewall phase?

I once was playing a game at a lowly section of the British Championships when a female IM (Sheila somebody perhaps ... memory fades) came over and said something along the lines of:-

Think the Cabbage was invented by Bill Hartson in his book How To Cheat At Chess. Antony had a Watford match tonight where he put all his pawns on dark squares btw- we have very good lighting there!
Andrew

Yeah.
I had exchanged my dark-squared Bishop, it was all part of the plan (and I didn't draw either!).