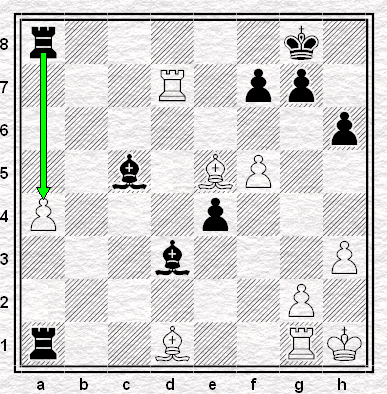 42...R8xa4!
My favourite move among moves I've played myself. Or at least, the one that came to mind when asking myself what moves of mine I remembered with most fondness.

Looking it up, I was surprised to find how long ago I played it. Indeed, having played no tournament chess - or none at normal time-limits - between 1983 and 1991, it was, it transpired, right at the beginning. The new beginning, when, at the age of 26, I returned to chess. It was played in the third round, against a player then graded 192.

So in the sixteen years since, I seem to have done nothing of any note. Or almost nothing.

What I like about it, I think, what makes it memorable, is its wit. White's previous move was 42.Bf4-e5 attacking my rook on a1 with his dark-squared bishop. How is this best countered? By putting my other rook immediately en prise to his other bishop.

It should have won, as well - in fact the game had once already been easily won and then thrown away. (The game is below: you can find the wins yourself, or let the computer do it.) In the sixteen years to come there would be many more easy wins thrown away - some against even stronger opponents - but no moves, it seems, to rank with this one.

"Hard to find " ??? Possibly not even the best move .Very liberal with exclamation marks .

Well, there is only one. Whereas you have employed three question marks...

perhaps the question marks relate to incredulity at the allocation of
(even)one exclamation mark to such a move .

A note to the anonymous poster.

If you want to be critical you're welcome, but it would be appreciated if you could sign your name. Thanks.

(Tom - you want to see what I've got lined up for the next in the series.)

names are for tombstones