Here's something that's puzzed me for maybe thirty years or more. It's a short passage from Bobby Fischer's My Sixty Memorable Games, relating to the position shown below. 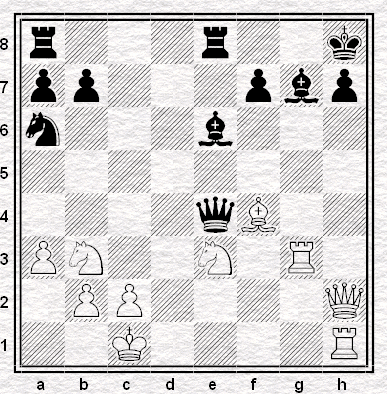 It occurred after Black's 27th (...Bg4-e6) in the second match game Fischer-Reshevsky, New York 1961. I reproduce the passage as exactly as I can, hence my use of descriptive notation:

That does it! Once this Bishop is gone, White has a field day.

What did Fischer mean by Right, Mr Thomas?

Did he mean "you are correct, Mr Thomas, it's a winning move"? (It is, of course.) If so, why did he append an exclamation mark to the move he did play, which while it also wins, does so more slowly?

Did he mean "right, Mr Thomas, you are indeed missing something"? If so, what did he have in mind?

Did he mean that Mr Thomas was missing something, but that it wasn't something on the board - that he (Fischer) had a reason for playing the way he did and that Thomas missed it?

This puzzled me a lot as a kid, when I read Fischer's great book incessantly. A generation before computers, I satisfied myself many times that the knight move won immediately - as I'm sure Thomas, a generation earlier still, must have done before writing.

So I wondered, if I had understood the chess, if I had not misunderstood the English, and I pored over it to see if there was some hidden message there, some joke, or something so obvious it was too obvious for me to see. But I never found it.

So still, all these years on, I do not understand what he meant. Fischer seems confident in his meaning - Right, Mr Thomas! with an exclamation mark. But what? And why the exclamation mark after 28. RxB?

I think this is what he meant:

"you are correct, Mr Thomas, it's a winning move"

And the answer to this:

'why did he append an exclamation mark to the move he did play, which while it also wins, does so more slowly?'

is that Fischer still considers Rxg7 an excellent move, despite their being a more efficient win available.

I think that's the most likely explanation, but if that's so it's a bit clumsy. Would Fischer normally append an exclamation mark to the second-best move? And why wasn't the ambiguity spotted during the editing process?

Mm, I'm not sure I see the ambiguity. A move can be excellent without being best. I agree the passage is clumsy though.

Well, the ambiguity is basically the same as if you asked somebody "should I do X or Y?" and they said "yes".

Perhaps Fischer was considering style as well as efficiency?

I've not looked at the position in any depth but even at first glance RxB is qualitatively different to the more mundance Nd2.

Perhaps Nd2 is the better move, but it does not deserve an ! -?

Nd2 looks cleaner but might Fischer have been trying to make a point: Not only can I win by the obvious move but also by other means?... Maybe he was saying to his opponent: your position is so bad that I can walk all over you.

I've seen or heard the question asked previously. Possibly Justin drew my attention to it before. There's no discussion of it in Elie Agur's excellent book 'Bobby Fischer: His Approach To Chess'.

Now isn't that a fine book. Not well-known, but ought to be.

I think Angus may have it there: he's saying "yes, you are missing something: I saw that but chose to play another move because I felt like it", which would be the third of my options, I suppose.

But we don't really know.

In "Bobby Fischer Rediscovered" Soltis gives Rxg7 !? saying "Nd2 ! might have ended matters immediately". There was bad feeling between the two and Reshevsky had (according to Taimanov) said "I would settle for 19th (at Buenos Aries) if Fischer placed 20th".

So perhaps he wanted to torture his opponent rather than win straightaway. Crush his ego and all that...

You are right Jon because it was a match not one game. But I think Fischer was being sarcastic "right"- suggesting Reshevsky still would not have resigned after Nd2 and why Soltis says "might" have ended matters immediately. We have all done it occasionally - not resigning when in a hopeless position.

Just a thought - did people say "right" in that way forty years ago? (They may well have, but I thought I'd ask.)

Fischer was a very straight forward person so i'd rule out sarcasm. Chances are the awkwardness of the passage had more to do with the publisher than Bobby.