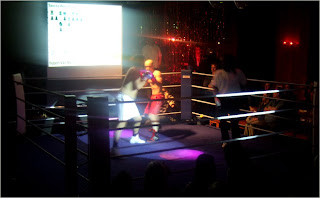 I like to tell myself that I am not a violent person. The feebleness
of my right hook is matched only by the lack of dignity I display upon
being assaulted myself. My knees go weak at the sight of blood. I
don't like war (controversial, I know) and when I recently stubbed my
toe on the District Line down to Kew I felt the tiniest tear begin to
form in the corner of my left eye. It is beyond me why I don't wear
glasses, just to officially consummate my weediness. And yet, I could
never honestly describe myself as a full-blown pacifist, and nor could anybody
reading this blog. Why? For the simple reason that we are chess
players.

Violence, in its crudest form, can be imagined as something requiring
body contact: fisticuffs, muggings, taekwondo. But when one brings an
adversary to the ground with a single punch it is not the crack of the
skull in itself that is thrilling but the knowing fact that you are,
for the time being at least, superior. Quite apart from its vulgar
military overtones ('how warmakers love to play games!' screams
Bronowski in The Ascent of Man) chess is a violent pursuit. In
competitive play we exert huge energies on a weekly basis in order to
destroy the morale of people who are more often than not complete
strangers. The very best of us, like Bobby Fischer, take great
pleasure in 'the moment when I break a man's ego.' Delivering checkmate is
just as satisfactory as battering an opponent senseless with the fist,
only far more damaging. At least a knockout punch gets things over
with quickly.

And so the relatively recent marriage of chess and boxing – as
mentioned previously on the blog here and here – only makes explicit
what anyone who has played the former long enough knows too well: that
it is a carnal, primitive 'hobby' that satisfies bloodlust in a
superficially unobvious way. It is as if some passer-by in The Sixth
Sense had shouted 'oi, Bruce! You've got a bloody great hole in yer
chest!' But this does not mean that chessboxing – which made its
debut on British soil five days ago at Bethnal Green Working Man's
Club – is pointless or doomed to failure. 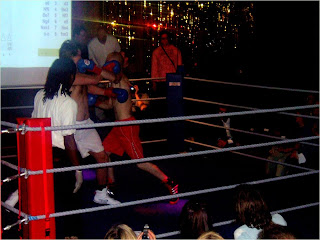 There is one obvious appeal to chessboxing. If one were normally to
ask a decent, upstanding, non-chess playing member of society to come
with you to a chess event, they would rightly tell you to take a
running jump. If you mention, however, that the chess will be
interspersed with people punching each other, and that there will be
both a bar and an after party, then you may have more success. I
certainly found this to be the case on Friday, when I was joined by two
'decent', 'upstanding', non-chess playing chums. In fact the biggest
surprise was just how few chess players there were in attendance: not
once did I see the familiar bearded face of an habitual 170-er or an
unpleasant junior with an inversely proportionate knowledge of opening
theory and the real world. Instead, the Bethnal Green crowd was
composed mostly of casual boxing fans attending for the sheer novelty
value. 'Take his bishop!' yelled one jack-the-lad before a single
move had been played in the evening's first bout between 'German chessboxing
sensation' Sascha Wandkowsky and Holland's Hubert Van Melick.

It is probably for the best that there were none too many ECF points
floating around in the audience. Play was not of a high standard
(1.e4 c5 2.Nc3 Nc6 3.d3 e6 4.Be3 was Van Melick's botched attempt at a
Closed Sicilian, for example) and there were repeated technical
difficulties with the relay software that ensured we lost track of the
position every five moves or so. This might not have been so much an
issue if the 'commentator' had had the slightest clue as to what was
going on over the board, but his kibitzing was inane and free from
analysis (think David Pleat, but without the dark past). He also took
at least thirty seconds to realise that Wandkowsky had delivered mate
in round 7 of his contest. And this was all capped off by the
organisers inexplicably managing at first to have a light square in
the left hand corner of a computer generated display board. Truly,
this was not one for the purists. 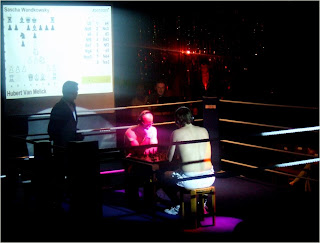 I rather feel that these quibbles are beside the point, however. This
was not a quirky attempt to popularise chess (as Justin complained of
the Britain-Russia ice chess game two years ago) but an exhibition of
a fledgling hybrid sport, one that has every much to do with boxing as
it has with the Royal Game. I was informed by a charming lunatic in
the lav that the boxing was far from impressive too, and I have no
reason to doubt him. But from a position of ignorance I was able to
find it curious and exciting; with any luck, this is what Bethnal
Green's non-chess playing fraternity thought about the chess, too.
Chess and boxing are natural bedfellows, and certainly the evening's
main event between Stewart Telford and Tim Woolgar proved to be a much better
demonstration of both. Woolgar, London chessboxing's head honcho, at
least seemed vaguely au fait with the black side of a Philidor. For
the sport to succeed, however, stronger competitors from both chess
and boxing shall need to be found. As such it is the duty of Woolgar
et al to ensure that their next event shows both sports in their true
glory. In chess terms this means making sure the bloody display board
works and finding a commentator capable of providing simple yet
accurate analysis for the baying masses.

But it is a highly promising start: as we were dutifully reminded by
our compere on Friday night, the 100-strong crowd in Bethnal Green did
mark the largest paying audience for a chess match in Britain since
Kramnik beat Kasparov in Hammersmith back in 2000…
Posted by Morgan Daniels at 10:57 am

I'm a fan of both boxing and chess, but something just makes me feel uncomfortable about chess-boxing. Boxing is a very dangerous sport which needs careful safety procedures and controls in place. I would be concerned if you had matches involving a good boxer/poor chessplayer against a poor boxer/good chess player.

Is that Colin Costello c160?

'He also took
at least thirty seconds to realise that Wandkowsky had delivered mate
in round 7 of his contest.'

Maybe he'd blacked out for thirty seconds and couldn't actually see anything.

all they need for chessboxing to be credible is some sort of hybrid weight category/chess ranking system, which can't be too difficult.