Following yesterday's rest day for the players (though no day off for the organisers who've been busy on the internet), the Staunton Memorial resumes this afternoon at Simpsons-in-the-Strand.

At the halfway point, van Wely is in second place with 4/6 closely followed by Smeets, Timman, Short and Speelman on 3.5/6. Of these five Smeets and van Wely have the advantage of not yet having played either Cherniev or Bob Wade. The latter pair are the tournament back markers and by some margin the lowest rated in the event, so the two dutchmen should probably be considered as having their noses some way in front of the three former candidates.

Out ahead of everybody, however, sits Michael Adams who has a very perky 5/6. Handing out spankings to Werle, Timman, Smeets and Wade has given him a rating performance for the first half of the tournament that works out to a shade over 2800 and he's looked almost totally invincible so far.

Adams was fortunate to survive a dodgy moment against Nigel Short on Tuesday. If my database's memory serves this was the the first time England's top two have faced each other for seven years* and Nosher thought it worth wheeling out Alekhine's Defence for the occasion. Rumours that he was briefed on the finer points of 1. ... Nf6 by our own Angus French have yet to be confirmed but in any event Short obtained a fine game and at move fifteen reached this position ... 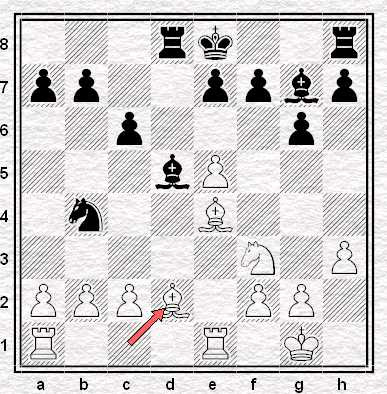 Adams played 15. Bd2 apparently totally missing Black's idea. It could have been a lot worse but as it turned all he suffered for the oversight was the loss of any possibility of playing for an advantage. The game burned out to a completely level position and was agreed drawn five moves later. Who was it who said the good player is always lucky?


Curiously the day before his encounter with Short, Adams had missed another simple (by his standards) tactic. 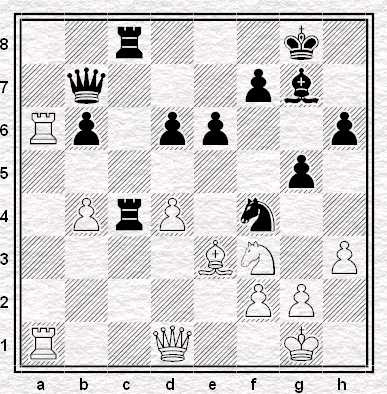 Wade had just retreated his queen from c2 to d1 in response to the capture of a pawn on c4. After a few minutes thought Adams played 35. ... Nd5. It's certainly an attractive move since it leaves Black a pawn up with a knight blockading the isolated queen's pawn which is infinitely superior to White's horrible bishop on e3. It's difficult to imagine anybody surving this against Adams, least of all a semi-inactive opponent several hundred rating points out of his depth.

Wade did indeed resign a few moves later but just like Nigel Short it seems Mickey Adams doesn't always pay attention to Tuesday's second aphorism. It may be slightly harsh to point this out since he is winning anyway but in the diagram above Black has a neat tactical sequence that ends the game at once. I realised this while I was watching the game waiting for Black to play. Not that I'm a tactical genius you understand. Andrew Stone pointed the key move out to me no more than five nanoseconds after Wade had retreated his queen.

Adams is obviously one of the greatest chess players the country has ever seen. According to chessliverating.org his performance during the first half of the Stauton Memorial has lifted him back into the world's top 10. Doesn't that illustrate the underlying attractions and frustrations of chess?

If a player of Adams' class can make such simple mistakes what chance do the rest of us have? Chess is just impossibly difficult. Though not, it would seem, too difficult for Andrew Stone.

* Not quite their first game this century as we'd thought yesterday. It seems they played three games in 2001, the last being a 33 move draw in the 4NCL in May of that year.
Posted by Jonathan B at 8:35 am

It seems I forget the second aphorism too.

The internet is full of ridiculous claims. Am yet to find anything that beats chess is impossibly difficult but not for Andrew Stone! I do feel that Adams felt he was going to win easily enough and was not interested in messy tactics- just staying out of trouble would bring home the point. Of course against players of his own class he would not have this luxury, he would have to seize any opportunity going.
Andrew Stone

No it doesn't. It loses the exchange.