As of today, dear reader, I have just one month left of my thirties.

I must confess I'm not hugely keen on growing older but at least up to now I've been able to comfort myself with the widely held notion that the 17th of September will bring a re-energized fresh start for me. Unfortunately this morning during an ill-advised googling expedition I found an old article in the Daily Telegraph that began,

The belief that life begins at 40 is a myth. Research has found that the fourth decade heralds the beginning of the end.

Time, I think, to get few a easy chuckles by mocking those less fortunate than myself. Normally of course that would mean a visit to Chess Now* but today I'll go the other route and take a look at a choice example of the embarrassing resignation.

The position below is taken from Geoff Chandler's chapter on Tactics and Combinations in Master Chess: A course in 21 Lessons, Pergammon Press 1985**. 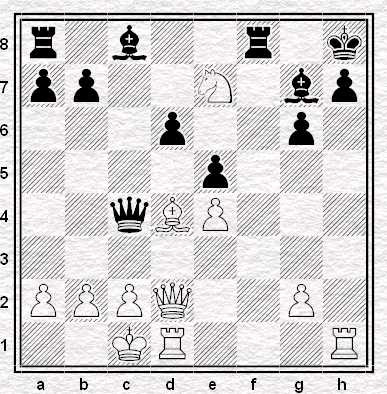 Although Black threw in the towel here he has a move that not only saves the game but even wins if White tries to force a mate by sacrificing the rook on h7. You work out what it is while I spend the day getting ready for my impending doom.

** a book I have mentioned several times before (an endgame study, an endgame technique and a double bishop sacrifice)
Posted by Jonathan B at 9:02 am

So what's the plan for your birthday, then? Booze & blitz?

Wouldn't pay too much attention to the Telegraph - they can't even count. Your fourth decade started nearly ten years ago (as did mine)ie when you were 30.

It's OK Jonathan, your little grey cells will still work this side of the Rubicon, indeed some way beyond.

I'm 43. I find it excellent - one thing I will tell you is that maintaining my physical health is a couple of orders of magnitude more important than I would have guessed. Over the past 3 years, eating, sleeping, and exercising well have made the difference between feeling great, and feeling complete sh*t.

Do you suppose when I hit my forties I'll finally stop mourning for my twenties?

Sorry if anybody tried it before. I've been at the Staunton Memorial all day and didn't realise it wasn't working.