Thanks to Vad for these splendid pictures of yesterday's Staunton Memorial Tournament, which witnessed the first clash between the English greats Adams and Short this century, I believe! 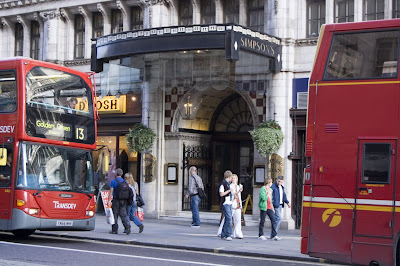 . . . the venue Simpson's-in-the-Strand from the outside, sandwiched between two buses . . .

. . . who'd know it was hosting a chess tournament? 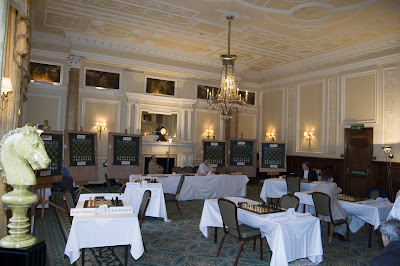 But inside things are getting ready. 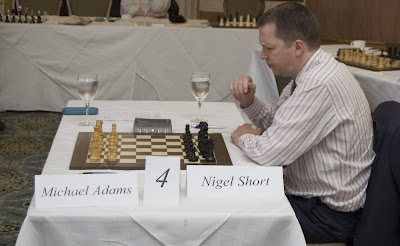 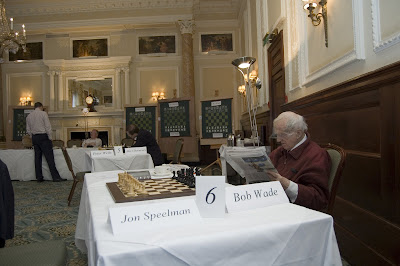 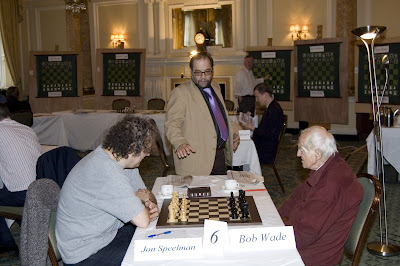 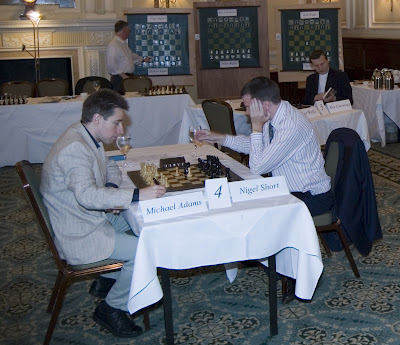 Meanwhile, Short has surprised Adams on move 1, playing the Alekhine with the black pieces . . . 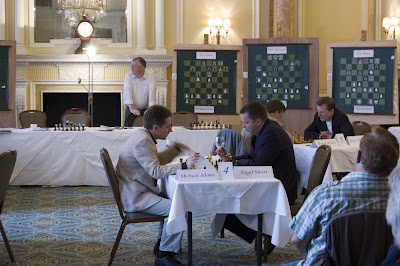 . . . but the game soon peters out to a twenty-move draw. Looks like the fianchetto variation, where with white against Timman back in 1991, Short won a well-remembered classic. 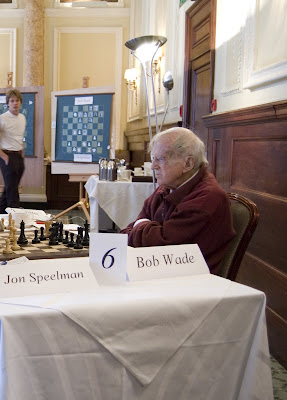 Things will not prove so nice for Bob Wade, however, in his game against Jon Speelman. 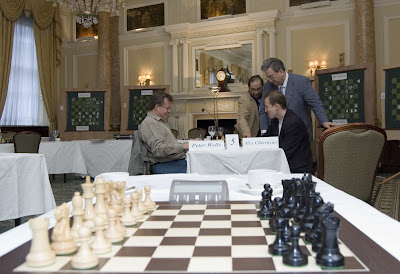 Wells and Chernyaev look to be the last to finish. 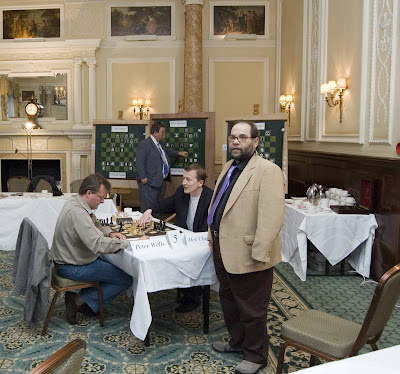 Soon there'll be nothing for organizer Ray Keene (in the background) and arbiter Eric Schiller (foreground) to do for the night. 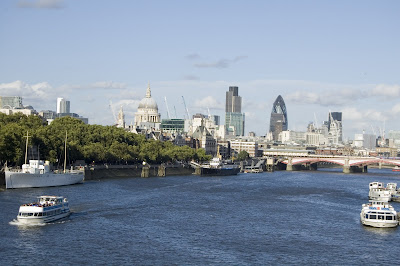 Except of course outside there's London, where there's always things to do!

Thanks again to Vad for these great photographs. The homepage for the tournament is here. Today is a rest day, but the tournament continues from Thursday until Monday from 2pm each day (except on the final day, when they start at noon.) Entry to the venue on the Strand is free and highly recommended.
Posted by Tom Chivers at 9:51 am

If you go, and if you're very lucky, you might get to spend time with the S&BCC blog arts correspondent ... as I did yesterday.

Yo Jonathan, are you going to be there on the last three days (eg 16th-18th)? I'm back in London on the 15th and very much want to hang out with the cool S&B gang. Also, how expensive is the bar at Simpson's? Hideously so, as one might expect of a restaurant in the Strand?

I popped in for 10 minutes or so a couple of times on Monday (Round 5)and found the games quite interesting, but the latest (Round 6)looks disappointing just looking at the results - Draws in 15,17,20,21&32 moves with only Speelman beating Wade in 37 moves, who he clearly outgraded.

There's an interesting article by Eric Schiller available here about organizing the Staunton. It basically divides into two parts. In the first part, Eric describes the organization and history of the tournament. In the second part, he describes how it's under threat from Termites!

I've no idea about the bar but I imagine a small beer would cost at least one testicle and probably both. Actually, I saw Nigel Short in the bar just after he lost on time against Timman. He looked so amazingly pissed off I was going to offer to buy him a drink to cheer him up a bit. At the last moment I remembered (a) the likely cost of such a gesture and (b) that he's made millions from chess and therefore decided that he could buy his own sodding drinks.

Tom was floating the idea of meeting for a drink on Monday after the last round finished. Any other takers?

* I've been watching the Wire and this is the sort of thing they say on there.

I am 100% behind the idea of a drink or six after the last round. Count me in.

Thanks very much for these great photos. But could we also see the Dutch players, please? I met them last year at the same place...
Siegrun

Eric Schiller is indeed the sole arbiter for the event this year.

A FIDE International one at that!

Is it just me that despairs of the sartorial blundeers of certain members of the chess fraternity?

Schiller appears to be sporting both pants and jacket a few sizes too big in the pic. Sort it out!

I think he looks dapper!