One of the things about the approach of a big birthday is that it inevitably leads to a review of life so far and thoughts of what might have been.

Chesswise, at least, for me this process could be worse. I've lost any number of games in any number of stupid ways (e.g. here) but I can't say I regret any really important losses if only because I've never been in a position where winning or losing really mattered. Sure I've sulked for the rest of the night and even into the following morning but that's about it. I wonder what it would be like to recall winning positions against, say, Ivanchuk and Anand but on both occasions I'd missed the simple tactical sequence that secured the win. That, I rather think, would tend to keep me up at night from time to time.

A hundred years ago such was the fate of one S. Lipschuetz who must have spent much of the rest of his life kicking himself after failing to beat Zukertort and Lasker. 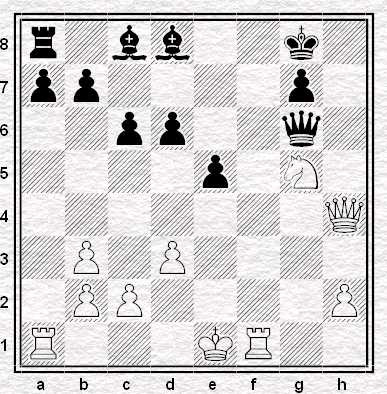 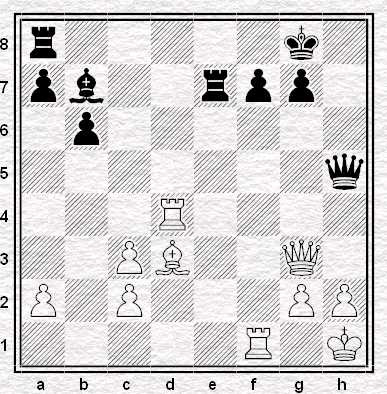 NB:
today's positions have been taken from Geoff Chandler's Contribution to Master Chess: A course in 21 Lessons, Pergammon Press 1985. My database suggests in the second position there was a Black pawn on c5 and the White rook was on f4 not d4.
Posted by Jonathan B at 9:03 am

Ooh, the Zukertort's not so hard to see, is it?

Update...nor the Lasker. (Says the man who never ever sees the tactical finish himself.)

Tell that to Lipschuetz Justin.

Just shows how weak the old players were. My pet rabbit could spot Qh8+ with a blindfold on and it's been dead since 1977.

The Zukertort one is not hard to see like the Short-Timman one, but of course neither had anyone telling them you have a winning move here. Jonathan, as I keep telling Tom, you should give youself opportunities to have games where winning/losing really matters. You won't get them if you restrict yourself to league chess as you will usually play people of roughly the same strength (so no opportunities for 'scalps')and there are no prizes to win. Also your result will often have no effect on whether the team wins or loses. OK, it is harder for lower rateds to have really crucial games, but by playing tournaments you still have chances, either by opportunities to win a graded section or if you enter an open, to beat a much higher rated player. In many ways team chess is a cosy existence (I am not downplaying it- I enjoy it and can never imagine dropping it) and if you confine yourself to this alone, you won't have the opportunity to get any missed opportunities. Maybe you play some tournaments, I can't remember, but I suspect you don't.
Andrew

Try it on this one.

Further to Andrew's post, tournament chess is far more bloodthirsty than league chess, and generally players are well-prepared and playing to win. No quick draws, unless it's the last round and you're guaranteed at least equal first!
Antony

Or unless you're playing me.

(Especially see Butterworth v Horton, last round, Kidlington some years ago. But that perhaps is for a later series...)

Maybe you play some tournaments, I can't remember, but I suspect you don't.

No you're quite right. I played at the Kings Head rapidplay earlier this year and that was my first tournament of any kind for ages.

I remember you making similar suggestions re: club/tournament play when I came to meet Justin and the rest of you after the Metropolitan tournament last year.

I have some difficulty in that I often work at weekends - although that's something I could usually re-arrange if I planned things properly.

Ultimately I think I need just to get my finger out.