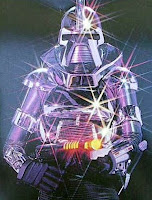 I have pretty exacting standards when it comes to TV. Does it have aliens? Does it have guns? If the answers are yes and yes, chances are I'll watch it. One yes and one no is a maybe. Two no's make a no-no.

Still I might make an exception for the next series of Eggheads, a quiz that doesn't feature aliens or guns. Why? Because the production company is trying to recruit a team of chess players to take part in it. And what's more, those chess players could be you.

Interested? Maybe in the prize of £1,000? Auditions are tomorrow, and then again in January. Details are here, or alternatively you can email Olivia Hamblin from the production company for more information (who adds in an aside that "one of our resident Eggheads is a big fan of chess.") Background on the show is also available via Wikipedia.
Good luck if you decide to go for it!
Posted by Tom Chivers at 10:01 am

Somebody apparently living on Mars writes:

CJ once sponsored one of the rapidplays at the Surrey Easter Congress (either the Tooting or the Ashtead year, I can't remember which).

But who are they? The name is unknown to me (and apparently only to me).

Connagh-Joseph de Mooi ('the beautiful') a very good 150+ player with a sharp eye for tactics, and an opening repertoire to match! I have sent my CV in....

He comes across better in person than he does on TV.

Yes, have played CJ twice. He`s pretty sharp tactically. He tortured me for 4hours at a surrey Congress after tricking me out in the opening. A better chess player than quizzer from what Ive seen.


I bet he didn't get where he is today without being pretty sharp tactically.

About ten years ago I mentioned to CJ his televisual namesake. The great quizmeister was entirely unaware of TRAFORP. CJ, you've lost the round.

So have you, it's TFARORP.

So it is Justin so it is. But TRAFORP is better as it would amuse 8 year old boys reading it backwards. Try also Finsbury Park.

Fratton Park is even better.