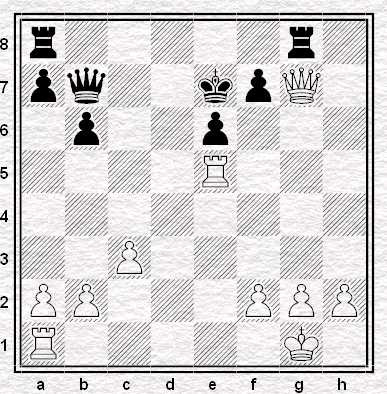 "... White's queen is attacked and it appears that any attempt to save it permits mate. Black might have been excused for anticipating a win rather than a king-trip to the eighth rank."

So White looks doomed but in fact it's Black who's going to lose. Given that we know that in advance I don't think it's too tricky to guess what White's starting move must be; the difficult bit is analysing the line out to the end.

Finding the mate without moving the pieces would be quite an achievement for most of us I think but White had actually worked out the finish nine moves before our starting position had even arisen. From here in fact:- 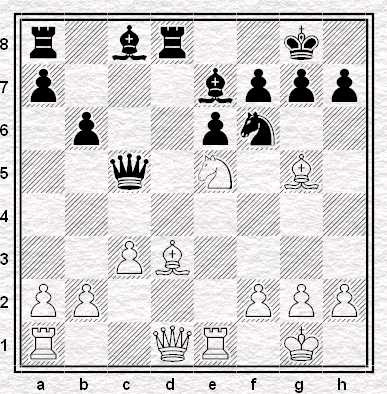 If you don't fancy calculating the mate you could take a punt at how we get from our second diagram to the first.


Anyhoo, although the S&BCC blog will continue to publish every day over the festive period that's it from me for another year.

No way. The initial sequences aren't forced; and B had better defence. I think in positions like this one sees the opportunity for the attack (if one is good enough, that is) based on first principles, and sees enough to know the attack isn't losing out of the box. Then, bit by bit, more becomes clear.

I'd guess Yanofsky would see the final mating idea quite late on, just before the move that kicks off the first position. Prior to that, he'd have settled for modest but conclusive material gain.

Even the strongest GMs don't (can't?) analyse 15 moves ahead in the second position. It's a more pragmatic, opportunistic and step-by-step approach, I think. I don't know what Fritz or Rybka can do though.

Q to b7? Hhmm, even a hint would spoil it

So White saw the rest of the game from the earlier diagram. I think the phrase we used at school was 'Jimmy Hill'. Taking into account that White was 14 one has to ask why someone so omniscient as to predict his opponents errors wasn't world champion for 30 years.

I should point out that Nunn/Cozens actually say,

"Yanofsky reocrds that he had planned it all, including the rook sacrifice at move 22, before playing 14 Bxf6"

so perhaps he did not actually see the final mate but judged that it must be mate.

It may also be the case that there was some schoolboy bravado here. As our Cynical (Cynical Tom?) points out, Yanofsky was 14 at the time that the game was played.

So it all seems incredible to me too ...

but then, why play Bxf6 at all if you don't see a winning or at least very advantageous continuation?

brings us from the second diagram to the first.

as far as schoolyard phrases go, we had "itchy boris" down Essex way.

Who was Boris? Jimmy Hill was a similar 'itchy chin' scenario.

No idea who Boris was, nor why his name should have been associated with the chin stroking gesture.

I'm talking essex in the early 80s so this was long before Boris Johnson and even Boris Becker appeared. Actually I can't think of any famous or semi-famous people with the name of Boris from that era.

As is what happened to Yanofsky when he grew up. Anybody know?

Yanofsky carried on playing but like Pomar, never fulfilled his early promise.

Daniel Yanovsky became a decent middle-ranking GM, good enough to beat Botvinnik (1946) and Portisch (1957), including an astonishing 112-move loss to Fischer (1962) - astonishing because it is clear from the game, Fischer was never going to settle for a half with this 'patzer', not in 1000 moves!

Yanovsky beat all the Brits of the 1950s - Penrose, Barden, Thomas, Milner-Barry and more. He could halve with Gligoric and similar. It looks like he stopped playing in 1986, by choice or fate I've no idea.

But he was clearly ahead of his time if he claimed to have seen the final position 15 moves or more ahead. In 1939, only Goebbels used 'spin'