[Reading Tom's piece on Monday about the famous Fischer-Larsen game, I remembered that I wrote about the game - saying something a bit different - in a piece for Disinformator a dozen years ago. I thought I may as well reproduce the piece here. Thanks to Sean Terry for permission to republish.]

The good player (who realises that clear opportunities should not be missed) will not refrain from proceeding beyond his depth, if he feels that in the depths he may find victory, or better chances than he can find in the shallows.

What separates a player of a given class from the player in the class below? What have they got that you haven't? It matters more to know this than to know how a grandmaster plays, because you're not going to be a grandmaster - but everybody would like to add 10-15 points to their playing strength.

Of course, if a player is better than you then on the whole they’ll likely do everything just a bit better than you; but I think that at certain points on the scale, much of the difference comes down to one particular area of understanding. Perhaps professionals differ from amateurs, above all else, in endgame ability: grandmasters from master, in their positional understanding. On the level that this article is concerned with, the difference between a player of 170+ and one of 145-165, does not appear to me to be one of calculative ability (I rarely find, in post-mortems, that I've seen more than my lesser graded opponent) but something to do with the confidence to sacrifice.

There are, of course, many exceptions to this rule, but in general, when I see games between players in the 'good club player' group, I find them a little - well, stodgy. People can build attacking positions, all right, but they are not always sure what to do with them. It is as if they expect, having played better to date than their opponents, that a clear winning line will present itself without material risk. Which, I'm afraid, it often won't. You have to be prepared to sacrifice.

Some readers will object that this is not true, that they sacrifice all the time. Are you sure? Looking through the bulletin [i.e. Disinformator - ejh 2008] you find people sacrificing for mate, and you find people sacrificing when they are in trouble. How often do you see sacrifices, below 170+ class, which are part of the normal development of an attack, but which have no clear outcome? Very rarely.

Here is the sort of move I mean. 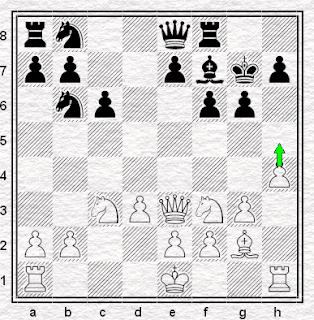 The most important thing about 16. g4 was that I didn't hedge my bets by playing Bf3 or something similar, trying to keep the attack by recovering the pawn. Even g4xh5, which won it back, was not played to win the pawn but to open the g-file.

Here's an another example from some better players. The h5 sacrifice is a classic theme, but how many players would reject it in their games, because they couldn't calculate through to the finish? (Don't imagine that Fischer did, either.) In the excellent Secrets of Grandmaster Play, by John Nunn and Peter Griffiths, a book everybody can benefit from (although I advise you ignore the reams of analysis and concentrate on the practical advice) Griffiths comments of the following position (Britton-Nunn, Islington 1978, position before 19...Nh5-f4): 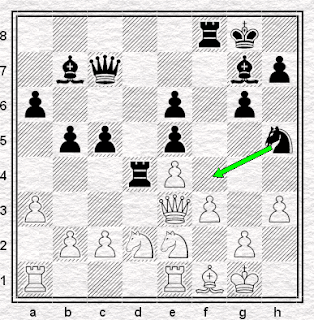 We can all appreciate that Black is getting plenty of compensation [after Nxd4 exd4 - ejh] yet we hesitate to take such decisions ourselves. Why? For two reasons. The first is that, although material is only one element in chess, it is the tangible one: and the same player who will throw tempi around with appalling abandon, or neglect his development, will shrink from sacrificing even a pawn unless he can see the consequences with absolute clarity.....

...the second reason is what Dr Lasker calls "the certainty of having to apply yourself vigorously".....in other words, "it's all very well for Nunn to do that, but if I tried it I would soon go wrong and then lose the endgame". Well, it's true that after sacrificing you have to play with a certain amount of vigour. But you have to do that anyway! If you want to stand up to really strong opponents.

Quite. There are two lessons to learn:

1. Sacrificing against an opponent's position is a weapon in your armoury, just as much as a pawn storm. Learn to use it, or you simply blunt your own ability.

2. You cannot expect to see through "to the end", or even to a position of clear superiority. You must trust your positional judgement, which will tell you whether the positional advantages you gain outweigh the material disadvantage you incur.

Of course, there's a psychological point as well, which is that your opponents will fear a player who sacrifices, and may not find the best move anyway. Another game illustrates the point: 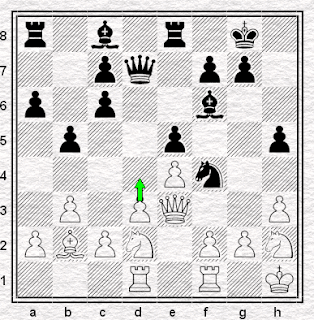 I think what players fear is that defence will be perfect, their attack will be inaccurate and therefore their material deficit will be decisive. But if you've already played better than the opponent, why should any such thing occur?

My previous example was not, strictly speaking, the sort of play I'm referring to, since ultimately I had no choice but to sacrifice. But I had played for it from some moves before: it was the play, not a desperate contingency.

You mustn't play the first sacrifice that comes into your head, but you must get your priorities right. When considering a line of action, the most important thing is to open lines against the opponent's King. [temporary note: there appears to be a problem with the website that hosts our displays boards and there may therefore be problems viewing the game that follows. Apologies - ejh ]

One of those rare games where the winner feels he did everything right.

Black won this game because he knew White had played inferior moves, and so instead of panicking when White threatened to win material on the Queenside, he rationalised "I must be better, so where can I win it? White is piling up on my right, so let's look at the Kingside. He's got nothing there at all. Attack!" If he'd worried about the loss of a pawn on the other side of the board, he would never have attacked the King - and he would probably have lost.

I realise I've dealt entirely with sacrifices in connection with attacks on the King, rather than those for the initiative or a permanent positional advantage (pawn structure, opponents piece put out of play, etc). First things first. Next time you attack, be prepared to sacrifice. The alternative may be refusing to attack. How are you going to win playing like that?
Posted by ejh at 8:55 am

Heh. You should have seen my first attempt.

Incidentally, as a note (though not connected to that particular error): I've basically reproduced the article as it originally appeared, without, for instance, any computer analysis - to which I didn't have access in 1996. So I've not corrected any errors of analysis or judgement (like the rather generous exclamation mark that accompanies the very obvious first move in the now-corrected opening diagram).

A reluctance to sacrifice may be a lingering remnant of the adjudication curse. Younger readers may need to be reminded that a formerly popular way of playing an evening's chess used to be to play half a game (30 or 36 moves in 75 or 90 minutes) and then ask a "stronger" player to "adjudicate" a likely result had the game continued.

A popular but not unjustified myth was that adjudicators only ever counted the material and ignored dynamic or long-term considerations. So sacrificing a pawn at move 20 was not always a good idea if you only had 10 moves to demonstrate why it was justified.

Yes, RdC, that was exactly how I remember it. Sneak an edge, shepherd it through the game, convert to a pawn up if you could, and sit on it. Under no circumstances reach adjudication with a material deficit, no matter what compensation in initiative etc, because the best you could hope for then would be a half. Adjudicators would invariably need 'proof of win' before declaring against a material advantage, believing presumably that it was an objective measure rather than a subjective judgement on what might happen, were the game to continue. A crazy arrangement we all took for granted 'back then'

When i sacrifice it's usually out of desperation...