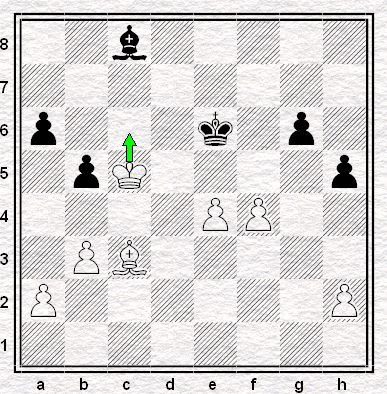 Horton - Faro Perella, Huesca Individual Championship 2008, the game from yesterday's posting - the position in the photo was that after White's ninth move in the game given below. The position in the diagram, however, is that arising after 42...Bd7-c8. White, who had managed to make something out of a very drawn ending indeed, proceeded to play 43.Kc6 and press his clock, at which point we became aware that Black's clock was showing -0:00 thus indicating that Black had lost on time before making his last move.

Black was not entirely pleased about this, being of the opinion that he'd made his move before his time had run out and that the clock must somehow be faulty. I wasn't in a position to support or contradict him, not having been looking at his clock at the time.

Anyway, at the time I didn't think it made much of a difference: Kc6 wins a second pawn and seeing that one of those pawns was passed, with a second one surely coming on the queenside soon, I thought the position resignable, but to my surprise Black thought otherwise and a postmortem sequence swiftly followed: 43... Bd7 44.Kb7 b4!? 45.Bxb4 Bb5 protecting the pawn I'd been expecting to win, albeit at the cost of jettisoning another. The activated bishop proceeded to make problems for my queenside pawns every time I tried to advance them. Moreover, Rybka found another way to make life a little difficult for White, with - in place of 44...b4!? above - 44...Kd6 and if 45.Kxa6 Kc5 trying to edge White's king out of the game.

Now, as it goes I still think the ending should be easily enough won for White. Rybka's plan can be combatted with 45.Bb4+ or the - simply 46.Bc3 is good enough, giving up the passed pawn after 46...Bd3 47.b4 (or even 47.a4 and if 47...Bxe4 48.Kxa6. Still, it's funny how hard it can be to prove a won ending won in a post-mortem (I didn't) let alone at the board when you have thirty seconds a move and your opponent doesn't feel like resigning early today.

What's odd, though, is that I played the same opponent in the same competition last year, albeit with colours reversed. (Or this year was with coloured reversed, since I suppose you cannot reverse the colours until you have had them once already.) And as it happens, on that occasion too I was two pawns up, with opposite-coloured bishops on the board, in an ending I thought my opponent might well resign and he thought he might well draw. Doubles: doubles, but opposites. I'm not sure if that's what Kavalek meant.

To this (1.e4) player that game looked level for a long time . . . was there in fact though a slight edge for you for most of it?

Yes, but not by the time we got down to queens and bishops.