Why Study the Endgame? II

"Someone told me once during a recent tournament that he did not need to study the endgame because of his last twenty-two games only two had reached this stage. Later in the same tournament I saw him self-destruct in a position where he could have made it to a slightly worse endgame that offered drawing chances. I am sure that this is the usual pattern for him; he does not know the endgame very well and therefore he avoids endings at all costs. His reasoning comes afterwards."

Last week I pondered the question Why Study the Endgame? The answer, according to our anonymous correspondent, is that 'It sorts out the Men from the Boys'. No doubt - but only if you actually get endgames when you play for real perhaps?

I'd be interested to hear from regular tournament players as to whether or not Aagaard's story feels like a plausible explanation/justification for the apparent lack of affection for endgames amongst many amateur players.

Even if it is, I wonder if it's different for those of us who are predominantly club players. I've played ten club games so far this season and if we leave out the one that's unfinished I average just 34 moves per contest. That figure includes one unusually lengthy encounter that lasted 71 moves. If we omit that one my average falls to below 30 moves per game. Not much chance of getting many endgames with figures like that.

Even if my games are unusually short this year, and I think they are, looking back at last year's games I see a large number of them ending around the 30-40 move mark. Not coincidental, I'm sure, that my games tend to end at the arrival of the time control that marks the end of the initial session.

It seems to me that for club players there's a huge structural disincentive to study the endgame. The practical problems of arranging a second session simply ensure games don't usually get played out so why bother to study a part of the game that you so rarely see for real. 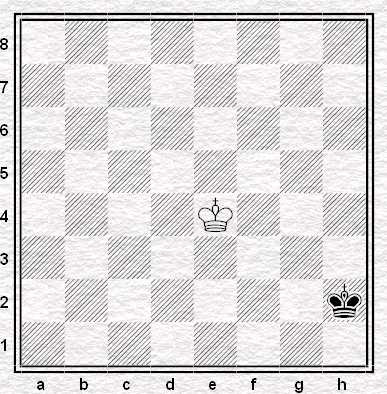 ... which I have to say was very satisfying. I can't remember the last time I played to bare kings.

This game and the hour or two of adjournment analysis that went with it have definitely whetted my enthusiasm for playing (and studying) endgames. But how to get them? Can you ever get enough endgame experience playing only club chess?

At the back of my mind I can hear Andrew Stone telling me that if you want to improve as a chess player you have to play tournaments. Perhaps the opportunities for endgame play, Jacob Aaagaard's anecdote not withstanding, is one of the reasons why.

Well you can get endgames playing correspondence chess, but it can take you a while to get there. You learn a lot that way though.

It's true of course that we have to play the opening every game and only sometimes play the ending, and that's probably one reason why we never get round to endgame study. The question is, though, how to do it? I'm sure we've all picked up a textbook and promised ourselves we'll rigorously work our way through it, and packed it in after three or four diagrams....

I used to keep a column in my results spreadsheet of what stage of play each game was decided, ie when the result became clear and there were no further wobbles. Looking over that data now I see that 23/64 were in the endgame; several others in the transition to the endgame.

Btw, a number of moves column doesn't contain this information. For instance, the Berlin Wall produces an endgame on move 8, whilst I wouldn't be surprised if some theoretical lines produce middlegame positions up to move 40.

A very thought provoking post, I had a brief look at my own games and around 1/3 have been won in the endgame. The major caveat is that at my (much) lower level my opponents generally have no idea about the endgame.

In my own (limited) experience, I have found Silman's endgame book to be good and the format helpful. Having levels to aim at and try to absorb makes the process less painful than a whole chapter about rook endgames.

Even as a relatively weak player (the only rating I have is on Chessworld and is currently over 2000, which is surely a huge overestimate of what my over-the-board tournament rating would be), about 1/4 of my games go to the endgame phase .

The fact that the endgame is almost universally despised at amateur level, combined with the significant number of games that reach that stage means there's a huge opportunity for players who are willing to put in the hours and study.

I read somewhere that a good way to practice endgames is to play out (against a strong computer opponent) master games where one master resigned or a draw was agreed. Take over from where the game left off and see if you can convert the won game into a win or the drawn game into a draw.

I'd like to second the mention of Silmans's Complete Endgame Course, which I've been working through. The way the book is structured - with each chapter devoted to endgames suited to a particular strength of player - make it a much easier read than many endgame books I've seen, while still being very informative.

To complement that book, I recommend 100 Endgames You Must Know by de la Villa, which focuses on endings that are statistically likely to occur, have a clear outcome, and are easy to learn.

I think the answer to why study the endgame? is best answered by capablanca, who, in 'last lectures' points out that it enables you to play both the middlegame and the opening better. It's like having a map on a road trip, rather than trying every road.

I don't study the endgame because I'm a hacker who's games rarely last that long.

It's also too hard and not as interesting as openings.

I'd love to become a better player, but it's just too much effort to be honest.

I think I speak for a lot of people here?

Re 'the Berlin Wall produces an endgame on move 8', I would call it a Queenless middlegame. Therein lies a part of the problem. Chess players don't have a common understanding of what the term 'endgame' means. A book I like is Shereshevsky's 'Endgame Strategy'. - Mark

I'd be interested to know what time control your club plays at. The club I play at plays 95 min/g plus 5 sec/move. At that control, I more-than-often don't get into the endgame. (I am a 1256 USCF rated player). I notice that those players rated 1600-1900 very often get into an endgame, and even our rapidly-rising 1400+ player has been often getting into an endgame.

I do find that I prefer complications and the possibility of finding a thrilling combination to the possibility of simplifying into a nearly even endgame, especially when playing against any stronger player. You'd think I'd be looking for any drawing chances against these players, in order to help my rating, but I still harvest a certain inferiority complex regarding the endings.

I too must recommend Silman's Complete Endgame Course. I think he does as good as job of explaining things, and often times a better job, than others. I like the layout of the book, which makes a lot of sense to lay it out by what you need to know at each rating level. I simply need to put the time into this book to get the knowledge and confidence. I think setting up his test positions on the computer and playing them out will help.

Another recommendation for stronger players is getting an Edgar Mednis book. Mednis seems a real proponent of using openings that trade down into won endings. His systems may seem drawish to some, but it seems what he proposed would force a lot of quick liquidation and the player with superior endgame play would prevail.

...though not perhaps any Edgar Mednis book, as I shall perhaps be saying in a future post...

Thanks for your comment Robinson. A quick fyi: our time controls vary according to the competition and the agreement of hte players. Quickest would be 30 moves in an hour then an extra 20 minutes to finish the game. Slowest would be a game spread over three evenings (ie thanks to two adjournments.)

Well, knowing a bit about the endgame in question helped me draw this:

(Specifically: I knew I had to get the pawn as far up the board as possible - I was sure g5 was a draw and g3 wasn't; I was a bit doubtful about g4. I worked out at the board that a1 would be a safe corner - he couldn't lift the guard and get the knight over in time.)