Hey Vicky you're so fine 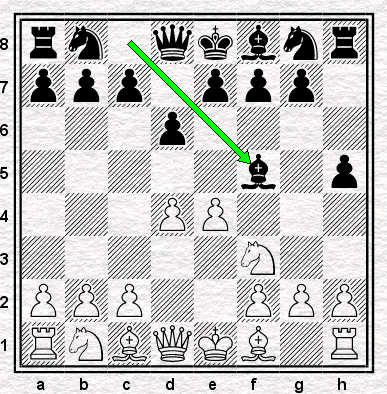 King v Vicky the Viking, position after 3...Bf5??
They're showing a lot of Vicky the Viking on TVE2 on weekday mornings, in between The Little Princess and - for some reason - The Animals of Farthing Wood. Although I am no longer a student, I do occasionally find myself watching these shows.

I could try and justify this on the basis that I work with children and with children's books, and therefore need to know what adaptations los chavales are watching, but in truth it has rather more to do with my inabilty to culturally adapt myself to sports bulletins which frequently consist of little more than whatever Real and Barca did the day before at their training grounds.

Hence, when I tire of seeing some tool on Telediario wearing what I imagine are fashionable glassses and smarming all over a couple of lads wearing flourescent bibs while jogging - which is often - I find myself parachuting out of TVE1 with the help of the remote control and into TVE2, at an hour when Vicky The Viking is in the middle of the first of its quotidian double-bill.

For those unfamiliar with this veteran of the international cartoon circuit, Vicky is the son of a Viking chief and accompanies him and his men on their expense-free-shopping trips abroad, in the course of which, naturally, all sorts of adventures and scrapes arise.

Though good at fighting they are not very good at anything else, especially thinking, and Vicky is, therefore, not too hard pushed to establish himself as the brains of the gang. This, I imagine, may help to explain how it was that when I turned over to TVE2, a couple of weeks ago, I found myself looking at a chessboard, with the pieces in the starting position, the king of somewhere or other on one side of it and Vicky, rather than any of his grown-up friends, his opponent. 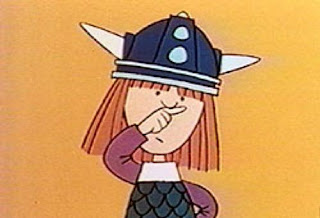 The game opens 1.e4 h5 2.d4 d6 3.Nf3 Bf5 bringing us to the diagram position and shortly afterwards to a cry of "I've lost my bishop!" from Vicky - who, however bright he may be, is not actually much of a chessplayer. The same can't be said of his opponent, though who his opponent actually is may be a little moot, since if I followed the plot (not complex in itself, but my Spanish comprehension is still far short of adequate) the king is actually receiving illegal assistance in the form of messages being sung to him by his bard. (A shame, I suppose, that Ray Keene didn't think of the idea first - the show apparently first aired in 1974-5, well before Ray's yoghurt-related Baguio caper - although come to think of it, that's not something that would restrain him normally.)

As it turns out, despite being thoroughly outplayed Vicky takes advantage of a complacent opponent and spots a back-rank mating opportunity for his rook on e1, which chance he takes to win the game. Hurrah! Hurrah, except that, as I said above, I turned on with the game - but not alas the episode itself - about to start. And so I don't, actually, know why it is that Vicky comes to be playing this game in the first place. What is the nature of the challenge? Who has claimed what? What is at stake? I may never know.

I have slept, since watching the half-episode I saw, several times, untroubled (as I am usually untroubled) by my ignorance, but even so, I would like to know why. So, should you happen to know, there is a comments box below. Much obliged.

Anyway, seeing as Morgan opened the week with Alfred J Kwak I thought I'd bring it to a close with Vicky the Viking. Hey hey Vicky, hey Vicky hey.
Posted by ejh at 7:55 am

More proof that the 70s the golden age for chess.

One of the greatest theme tunes ever: http://www.youtube.com/watch?v=BMQcy8cTJoA