Is it possible to tell from a chess-in-artwork whether the artist is a serious chess player? In some the chess looks incidental, just a convenient hook on which to hang a stereotyped metaphor, or a prop to hold up a parlour piece. 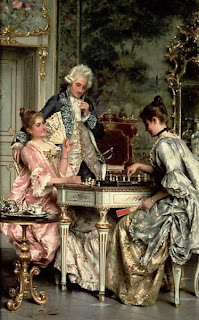 The Game of Chess.

Real players will suspect that artists such as this wouldn't know their a pawn from their b; they might just have well have shoved in scrabble. Or snap. 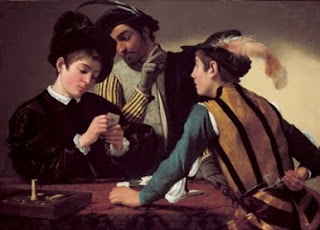 Other artists are obviously chess-savvy. They portray serious players playing chess seriously; they render the game respectfully and accurately; the game may even itself be the subject, with players surplus to requirements. And, as often as not, they work in series. Good examples, from earier posts, are Dominique Digeon and Nicholas Sphicas. 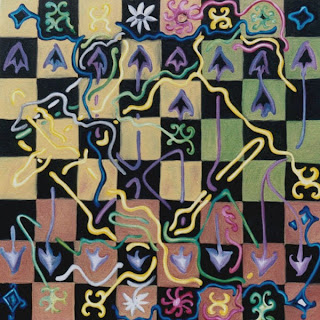 Another chess-in-artist who adopts the same intense focus, dispensing with people, and insistently revisiting his theme, is Samuel Bak, born in 1933. The Game Continues - chess in the art of Samuel Bak (1999) by Lawrence L. Langer illustrates 52, yes that's 52, chess-in-artworks by Bak, all dated 1998, to which you can add another 60 or so given by Scacchi e Arte dated between 1990 and 2003, including a series of eight water-colour studies demonstrating that Bak, anyway, could tell apart his pawns. 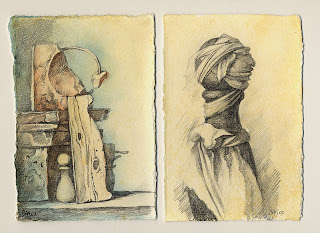 Pawns A and B.

That's well over 100 chess themed art works. Which is a colossal output, all the more remarkable because, at the time, he wasn't a chesser. But, he had form. In the foreword to the Langer book Bak says that his step-father "was involved in the world of chess. Mythical names of chess champions like Botvinik (sic), Lasker and Capablanca were on his lips whenever he tried, with very poor results, to turn me into a chess master." Which explains where the chess came from, sixty years before, but not the why, and the now. So, why does Bak do chess-in-art? Because, to attempt an answer on his behalf, he can use chess to represent and evoke struggle, the struggle for survival.

Struggle against an unyielding foe: this is the aspect of chess that serves his purpose. Bak uses chess to metaphorise (if there is such a word) an unimaginable episode of his early life: the ghetto in Nazi-annexed Poland, the Holocaust, and post-war displacement. These childhood traumas are refracted into his art through the prism of chess.

For me, the sheer volume of this therapeutic, expurgatory, didactic chess-in-holocaust-art is a bit much to deal with. Langer, and others, help by unpicking in some detail the meaning of it (see notes). Let's just focus here on some of the pictorial devices that Bak employs.

Firstly, there is the antique, medieval mise en scène congruent with the characters in the chess set: the knight, the queen, the king, the humble pawns etc. 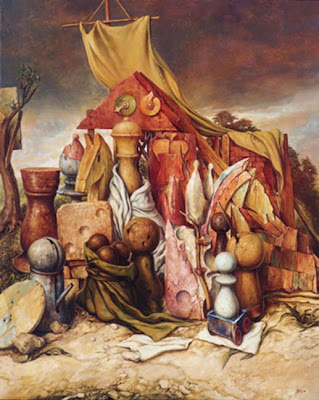 They inhabit fortifications and emplacements, and adopt the paraphernalia of war and oppression from the Middle Ages (though occasionally, and ahead of its time, you see artillery up-standing). This time-frame hints at the familiar image of chess as courtly dalliance - all be it with a large helping of irony.

Next, there is the landscape: ringed by the flat horizon only, barren, wind-swept, tree-less, riven and fractured, where hooded hordes stumbling in cracked earth wreak havoc, careless of Geneva Conventions and collateral damage. Or they loom. Ominously. 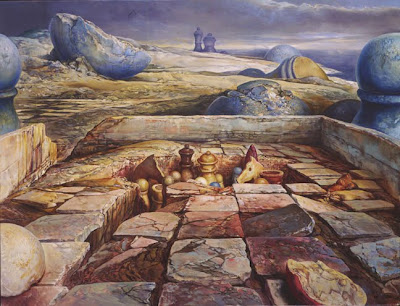 Then there is water: unusually in chess-in-art Bak features boiling seas, deluges, inundations; or, as below, a calm before or after a storm. And then there are the de-individuated pieces. Seldom do they have specific personalities, or expressions; rather, they take on human characteristics through costume or, and with greater effect, by attitude and body language. 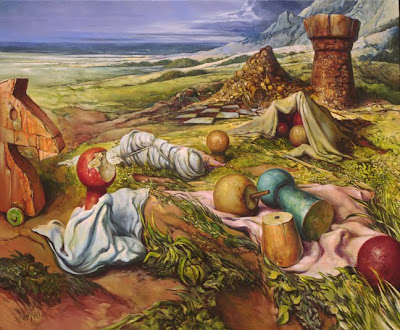 Finally there is the hyper-realist gloss, occasionally using Dali-like optical tricks and plunging perspective, supported by mildly punning titles (something your Streatham and Brixton Chess Bloggers know a thing or two about), all of which combine to add to the effect of alienation: you get it, but you can't identify with it. 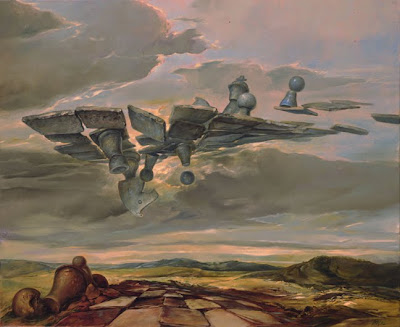 And maybe one wouldn't want to, because nothing nice seems to happen in Bak's troubled world. The good times stopped rolling some time ago; no-one ever cracks open a bottle, strikes up a tune, and has a knees-up. The warmest emotion is to be found when huddling together in fear, or in the fleeting conviviality of a clandestine meeting. And that must be how it was.

I don't think I like Bak's work: its obsessiveness; its hermetic inwardness; its metaphorical one-dimensioness; its relentless persistence; its rhetorical repetitiveness (something else your S&B Chess Blogger knows something about). This not to seek to invalidate or trivialise the experience of which he bears witness. But he is an artist whose vision seems to be locked on to, or in by, that experience. Like a tractor beam it inexorably drags him back. He can't see any other way.

Maybe, though, the title of Langer's book suggests some hope: "The Game Continues". All is not lost. The picture below, dated last year, shows some real people in modern garb trying to play the game on their own terms; that's really, not metaphorically. 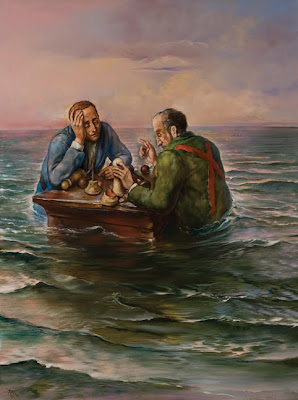 They stand on the bottom. The flood is draining. Not drowning, maybe they'll soon be waving.

Lawrence L. Langer (1999) The Game Continues - chess in the art of Samuel Bak. Pucker Gallery, Boston. All the Bak works in this post come from the Pucker Gallery.

For extended discussions of Samuel Bak's work, and more examples of his pictures, go to the Centre for Holocaust Studies, Christos Kefalis blog on the Chess Theory site, and the Pucker Gallery.

"Ringed by the flat horizon, etc." comes from T.S.Eliot's Wasteland, referred to also by Lawrence L. Langer in his commentary. "Waving" needs no explanation.

Is Card Players one of Caravaggio's celebrated errors? To me, the chap behind looks to have been painted with his eyes looking in the wrong place.

ejh: as analysed here for example.